Sandy and I woke up about 6:00 AM. A quick check of the weather radar showed a fairly intense cell working its way across Michigan towards us. There was also some light rain in the Windsor/Chatham area of Ontario but it looked like it just grew in place and wasn't going anywhere. It looked like we would be ahead of the bigger stuff and go around the lighter.

I checked the tires. The fast wearing rear was still at 4/32nds, where it has been most of this trip. I am totally stymied as to what is going on with this particular rubber. First it goes very quickly and then it stops wearing. We'll see what it does next.

Ron was leading again today and took us to the Bluewater Bridge to Canada. I was surprised to see that the toll was $3.00 US and also $3.00 Canadian. This is the first time this year that I have seen it at par, making it a better choice to use Loonies to pay. Unfortunately, I had already given Sandy American cash so we took a $0.15 beating on the exchange. I think we'll survive. There was no traffic going our way so we cleared Customs with no fuss, muss or bother. It's nice that the Canadian side doesn't worry about that list I am on. Ron got a question about how we, being from different side of the border, know each other and had to explain the wonder of VROC to the agent.

We cruised down the 402 almost to London and got off southbound on Highway 4. Crossing the 401, we stopped at an UltraMar station we the oldest pumps I have seen on a major station in years. But, as one local pointed out, he doesn't care about the pumps as long as they keep their prices low. We had to take a few minutes to fix Ron's handlebar risers. The right one had worked itself loose and, because it was the lower bolts, we had to pull the bar right off to tighten it. But riding with a loose bar is disconcerting as well as unsafe so it was worth the effort. 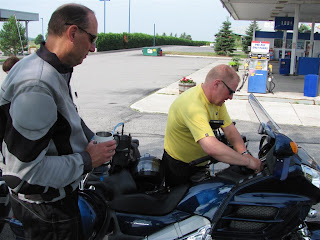 Ron tightening the handlebar riser
We followed Highway 4, Colonel Talbot Road south towards Port Stanley. Sandy noted that the area south of St. Thomas looked like a very nice place to live. We may have to look into this in the future if we decide to move south. From Port Stanley, we rode east and stopped at the Port Burwell Marine Museum. They have some outside exhibits, an indoor museum and a lighthouse you can climb for a small fee.  Be warned that the pitch of the stairs leading up inside the lighthouse caused most of us (except the super fit Judy) to experience pains in the fronts of our thighs when walking, sitting down, standing up or generally moving in any other way for the rest of the day. 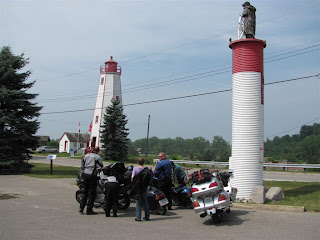 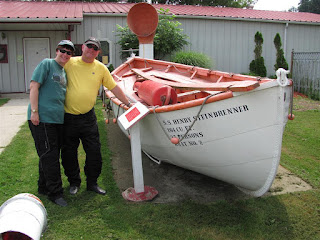 Lifeboat from the SS Henry Steinbrenner, named for George's father 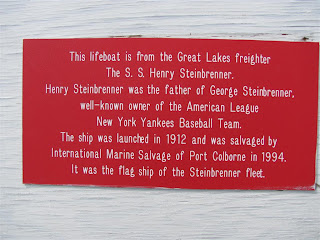 Plaque on the Steinbrenner lifeboat 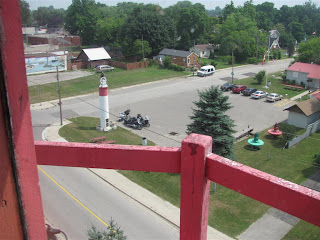 View from the top of the lighthouse
The heat was building again as we left Port Burwell continuing east on the back roads. We had a slight detour due to a road closure and got a close-up view of a few of the turbines from the Erie Shores Wind Farm. The area around Port Burwell is dotted with them. This project cost $186 million and will see 100 turbines in place by the end of Phase II, generating 99 MW for the Ontario power grid. 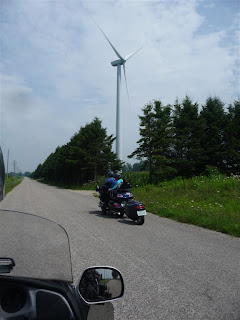 Ron and Laurie in front of a wind turbine
This was tobacco country. While we still saw some fields planted in tobacco, many of the sheds are run down or have collapsed while the fields around them are now planted in corn. It's good to see the farmers being flexible. I can only wonder if the corn is for eating or is being grown to feed the new ethanol fad. 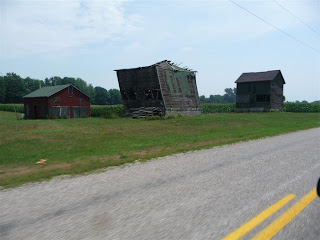 These tobacco sheds have seen better days
We took a short detour to run out to Long Point. After passing through the wildlife/turtle crossing without seeing any wildlife or turtles, we came to The Causeway Restaurant. Sandy and I, mindful of our excesses lately, split a BLT sandwich and fries. They do have one item on the menu, though, that serves as a challenge. Nobody at our table ordered the seven decker sandwich but a young man at the next table did. As we left, he was trying to figure out just how he was going to eat it. 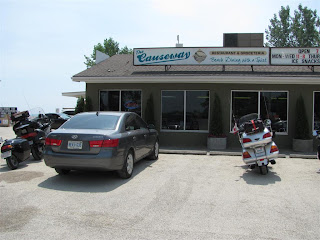 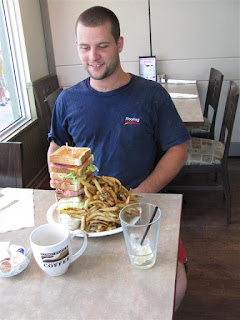 One intimidating sandwich
We connected with Highway 3 and proceeded to follow it to the end,taking a detour through Port Dover so the gang could see what the biggest motorcycle destination in Ontario looks like. Not being Friday the 13th, it was fairly quiet although more normal tourists were all over. We also passed Nanticoke with it's coal fired power station and large Esso oil refinery. In Cayuga, we took a break from the heat and noted that, through town, the road surface was as bad as anything we have seen to date. I'm sure we can blame this on Mike Harris and his downloading. Brad rescued a Monarch butterfly from his BMW mirror and set it up on a phone booth to see if it could recover. Sandy also managed to get a picture of an elk on a farm as we rode along. Finally, we passed through Port Colborne, former home of the INCO Electro-Nickel Refinery and present location of the Vale Precious Metals and Electro-Cobalt refining operations, the great INCO being nothing but a memory. We also crossed the Welland Canal which links Lake Erie to Lake Ontario, avoiding Niagara Falls. 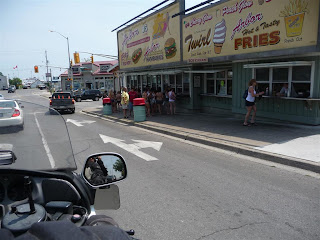 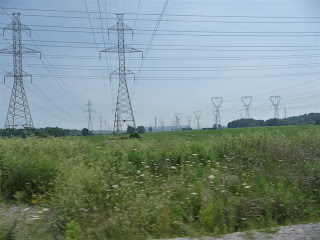 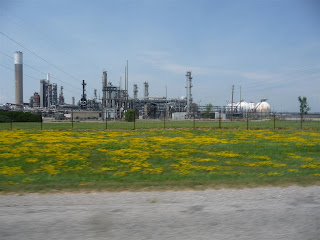 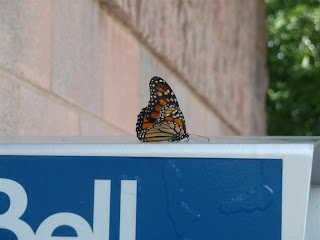 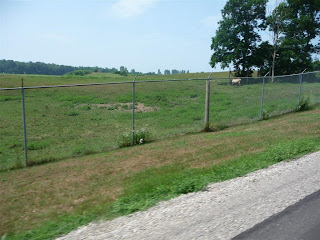 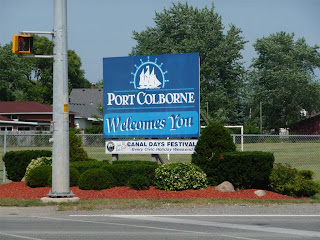 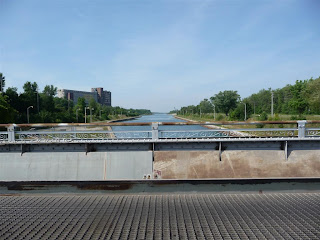 The Welland Canal
It's probably a good time to talk about the Uni-Go trailers that Ron and Brad tow. They originated in New Zealand and are now sold by an outfit in Ohio. My first impression was that they don't hold very much but, when touring, every little bit helps. And they do carry as much as the Wing trunk and saddlebags put together so it is a very useful capacity. The impressive thing is the way they track behind the bike and the fact that they have negligible impact on the fuel economy. Ron's gas consumption was only slightly higher than mine throughout the trip. My one concern was the specialized hitch because I still need the ball hitch for the camper trailer. I now find out that Ron also has a Bushtec hitch like mine and the Uni-Go hitch is mounted to a draw bar that slides right into the Bushtec receiver. If I can get my mind around the not insignificant price, there might be one of these in our future. 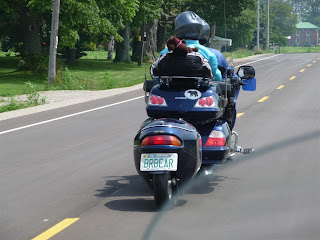 Ron's Uni-Go trailer
As we entered Fort Erie, we saw a sign marking the Ridgeway Battlefield. I assumed this was another place we had met the Yanks in the War of 1812 but subsequent research proved me wrong. This was where, in 1866, a group of Irish veterans of the US Civil War calling themselves Fenians attacked the British in support of Irish independence. We beat them back after the US Navy intervened and prevented the main force from crossing the river.

The Comfort Inn in Fort Erie is pretty isolated even though it sits next to the Queen Elizabeth Way. On the plus side, the rooms open up into the parking lot so the bikes were right there. We ordered Chinese food delivered from Happy Jack's and set up a buffet in the hotel's breakfast nook. The radar showed a storm heading our way and we hoped it would get here and be gone by morning.