It was very humid, warm and overcast this morning with a light film of dew on everything. That was good because the bugs on the fairing and windshield just dissolved. Brad and Judy went for an early walk around the neighborhood while Ron and I studied the weather radar. There was a large green patch over the Soo headed our way, so we suggested everyone get into rain suits before we left. 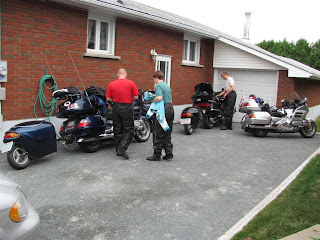 The gang in our driveway getting geared up to leave
As soon as we hit the road, the overcast broke a bit and patches of blue sky showed through. The rain suits, which seemed like such a good idea before we left, became oppressively hot. We rode west on highway 17 and stopped in Mckerrow for a quick bite at Tim's. There, we met a slim girl there who left Sudbury this morning on a red Sportster. She was riding to Thunder Bay to meet her husband but had no rain jacket and had forgotten to put her windshield on before leaving. Funny, that is something I would have noticed as soon as I hit the highway and, facing rain, I would have gone back for it. 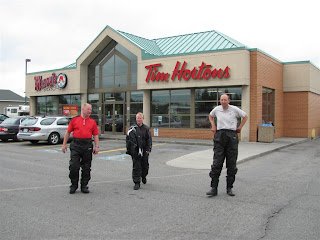 Leaving Tim Hortons - McKerrow Ontario
We rode on towards the Soo, encountering light rain which started near Massey. We continued, taking a brief break in the wayside along the Mississagi River west of Blind River where it continued to rain lightly. As soon as we left there, the rain stopped, the skies brightened and the road dried. I guess the heavier rain we saw on the radar had dissipated, because we were on the back side of the front. Ron credits the amazing effect of Little Miss Sunshine, as he calls Laurie, with keeping the downpour away. We continued to sweat in the suits another 70 miles until we got to the Soo and stopped for lunch at a Subway down on Bay Street. 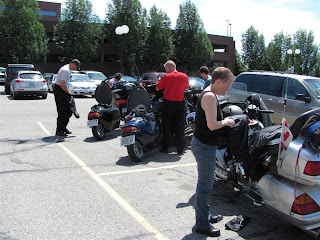 Stowing the rain gear - Sault Ste Marie Ontario
After lunch, we headed down Bay to the Canadian Bushplane Heritage Centre. Although I spend a lot of time in or passing through the Soo, I have never been here before. They have about 20 aircraft as well as two theatres and a simulator. We spent time checking out all the exhibits. 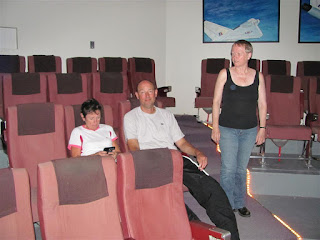 Judy, Brad and Sandy in the theatre - note the aircraft seats 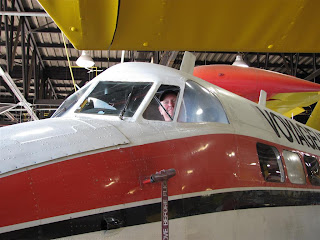 Ron in the cockpit of a Saunders ST-27 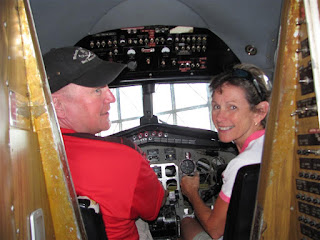 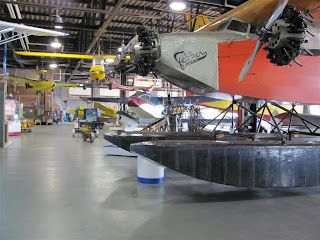 Fokker Tri-plane replica used in a movie about Amelia Earhart 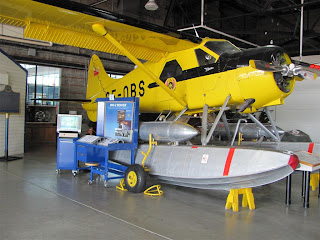 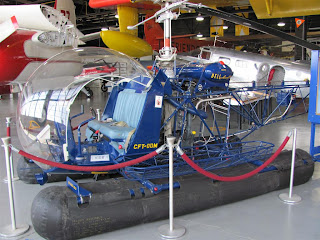 Bell 47D helicopter - I used to fly in ones not much newer than this when I worked in the bush
Outside the museum, Ron went to get his jacket out of his left saddlebag. I have heard about the left bag release linkage breaking but this was the first time I actually saw it happen. With Ron's coat locked in the bag, we headed for the U.S. where the motel rooms were cheaper (as usual). I was concerned about the border crossing after the Ogdensburg experience. Sure enough, as soon as our cards were scanned, bells and whistles were going off in the booth. This agent was a little older and, after mentioning NCIC and felony warrants on his phone, asked me if I was James L Robinson. Here we go again. I told him that no, I was James G Robinson. I said I knew why the alarms rang and said I had a few obvious differences from the other Mr. Robinson. He agreed that the bad guy was black and noted I was not. Unless, he said, I was Michael Jackson. We both agreed I wasn't MJ so, after a few typical questions, he admitted me to the United States without secondary inspection.

We all met up at the gas station right off the bridge where we fueled where Brad also noticed he had left the foot he puts under the sidestand to keep it from sinking in asphalt in the parking lot back at the museum. We decided it wasn't worth going back. Then he led to the Comfort Inn (it wasn't in my GPS), which was very nice and only $71 for a room with two queen beds.

Ron used some pliers to grab the broken linkage and get his saddlebag open. With his coat in his hands, he closed the bag and won't open it until the end of the trip when he goes to get it fixed under warranty. Everyone got cleaned up and Brad and Judy went over to Tractor Supply to get a metal plate to replace the foot that was left in Canada. Then we met at the Applebee's next door to the hotel for a good supper. I actually had a Padrone Margarita, not realizing that the shaker actually held three drinks. That took the edge off my plans to blog before bed and we turned in relatively early. This Days Inn in SooMichigan is very nice and we will probably use it in the future if we need to stay in the Soo. 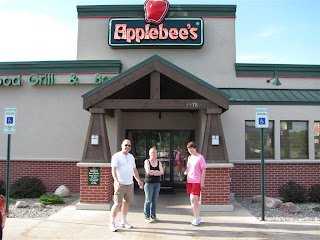