Two notes carried over from yesterday.

First, that Rube Goldberg device attached to the back of the semi trailer in my last photo is called a Trailer Tail. We are seeing more and more of them on the road. According to the talk on the XM trucker channel, they are supposed to reduce drag, increase controllability in windy conditions and reduce spray on wet roads. Sounds like an all around winner to me until someone needs to open the back doors.

Second, we talked to Sherm yesterday and he told us the wreck we saw on the way into Kingman Sunday happened when an eastbound pickup truck with four people in it blew a tire and crossed the median, hitting a US Mail semi. One person killed and everyone else seriously injured. That is the kind of wreck that gives me the willies because it could happen to any one of us. Now back to the day at hand.

We woke up at 6:30, not bad considering it was still 4:30 back in Arizona. Sandy had Raisin Bran while I checked. We had a truck jam as three floats before us attempted to get out of the parking lot onto the busy service road, but we were finally moving by 7:45.

It was 68 F as we headed east on I-40 under cloudy skies. The wind was out of the north as we moved along. The terrain was flat except for where it climbed to pass over secondary roads and railway tracks. As we entered Gray County, the countryside became more arid with many hills and gullies. We passed McClain, where I remember the Interstate going through the town at street level in 1978. 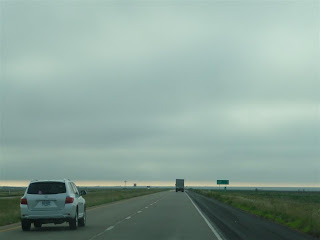 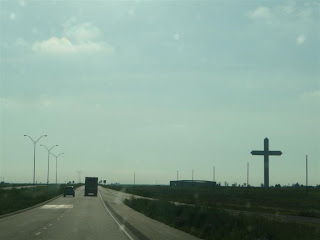 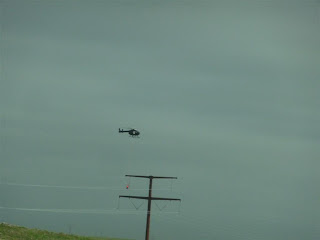 Helicopter lowering a worker to a power line

By the time we reached the Oklahoma line, the wind was out of the east and the clouds were long gone. We stopped in Erick for fuel and I picked up a Subway flatbread breakfast sandwich. The wind started coming from varying directions and I even saw two flags on the same pole going different ways. The trailer tows well but strong unpredictable gusts can make it a little hard to handle so I slowed down to 55 for a while. 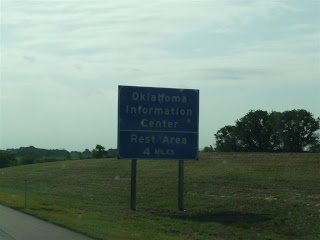 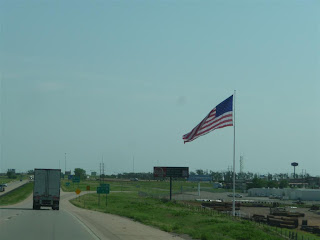 The winds got stronger 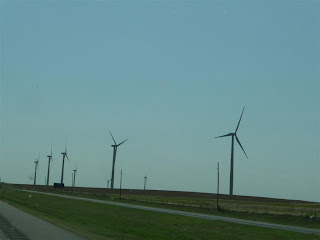 I wonder about the real economic viability of wind farms 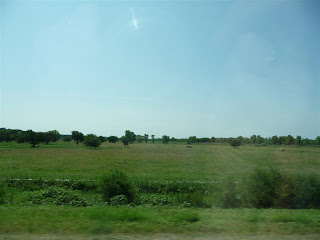 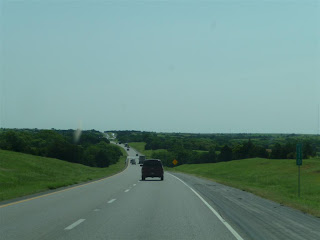 This is very pretty countryside

We arrived in Oklahoma City around noon. I should have looked for a McDonald's in an outlying area because the place I did stop was very busy. Their lot was full and the nearby lots, including Walmart, had nine foot bars over the entrances to keep tall vehicles out. I managed to get parked and we did get food before moving on. Sandy also found the squeak in the trailer. One of the metal tie down hooks was making the noise where it was connected to the aluminum eye bolt.

We left I-40 here in Okie City and started northeast on I-44. This is a toll road in Oklahoma, or rather two toll roads. The Turner Turnpike took us to Tulsa, while the Will Rogers Turnpike took us on to Missouri. On the first stretch, I stopped for fuel at a service area. We had to pay to get off in Tulsa, where I couldn't get The Tractors out of my head. On the Will Rogers, I nearly got into trouble because the largest bill they would accept was a $20. The toll was $9.25 (four axles) and I had $110, consisting of just two bills. 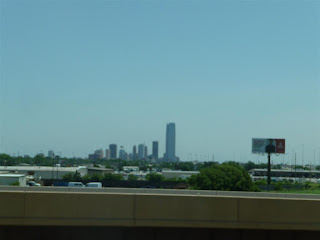 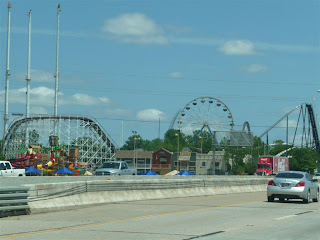 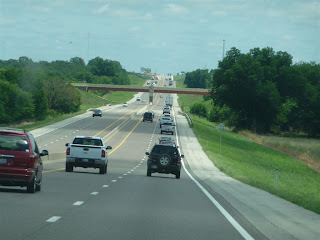 The Turner Turnpike - straight but not level 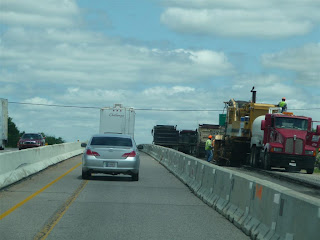 Even the toll roads have construction 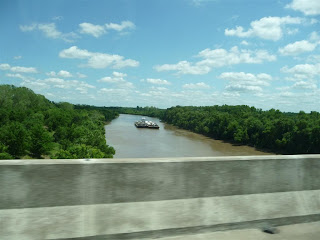 A barge on an unknown river 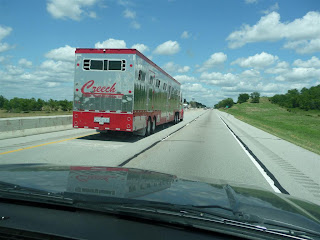 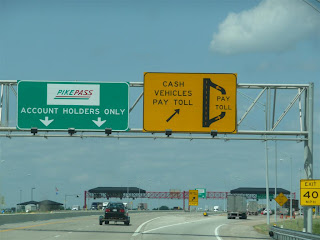 Sooner or later, the piper needs to be paid 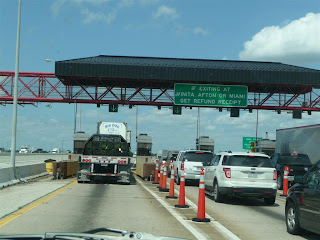 There was little traffic as we left Oklahoma and its turnpikes for the free interstates of Missouri. We stopped at the Welcome Centre and I called ahead to reserve a room at a Super 8 in Springfield. There was a fifth wheel there with a family in it. More about that later. 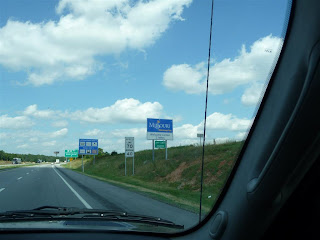 Welcome to the Show Me State

On the way towards Springfield, I tried a little experiment. Jack had asked me about using the Tow/Haul Mode, a transmission setting that alters the shift points to a more aggressive map. I told him I didn't use it because it is reactive while I am even more aggressive by seeing what is coming and manually shifting proactively. But I wish I had a six speed transmission and paddle shift because the four ranges are pretty wide. The experiment consisted of checking the RPM of various (three) speeds at 60 MPH. Fourth was 1,700 RPM and third was 2,400 RPM but second was a whopping 4,100 RPM. That is a large jump and it would be nice to have some more options in there. This is easy to fix if I want to trade up to a 2010 or newer model. Maybe later.

We started to see more Branson billboards as we approached Springfield and I felt the pull to turn south towards Eureka Springs, Arkansas. But that will have to wait for the September pilgrimage. 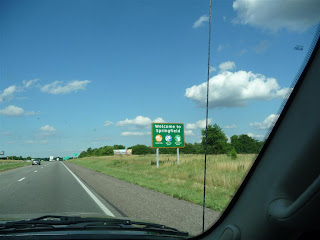 On the way to the motel, we stopped at a McDonald's for some McNuggets to take with us and encountered the fifth wheel from the Welcome Center. The Mom told us her husband sold aircraft and they were on their way to Oshkosh, Wisconsin for the air show. I'm sure Jack will understand.

Getting situated at the motel involved some backing and maneuvering since the lot didn't go all the way around, but I did it without hitting anything and I  avoided the trees. Sandy slept while I sorted pictures, transcribed notes and actually managed to get two blog days posted before turning in just after midnight. 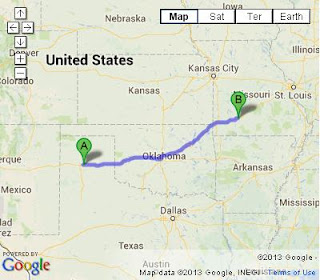 What you're traveling thru is why I'll stay on the west coast, between here and the east are a lot of "plain states"!!! I'm sure there is fun to be had, but you're talkin' a whole lot of daze on the road!!! 11 daze to/from Deadwood was long enough for me! Thanks!