This is the trip we have been looking forward to. First, we'll tow the bike to Deadwood, South Dakota and ride the Black Hills with a VROC crew for a few days. Then we'll load Sherm's Harley in the trailer with the Wing and head for Kingman Arizona for a couple of days. Then we will tow both bikes to Solvang California for the Aebleskiver Rally. On the way back, we'll drop Sherm in Kingman and come back via I-40, I-44 and roads yet to be determined, arriving back in Sudbury around July 28th.

After working through a list of things that needed to be done before we left, we hooked up the trailer, loaded the bike and stowed most of the gear last night for an early morning getaway. We hit the road at 6:35 AM under clear skies and, as usual, into a headwind as we headed west on Highway 17 towards the Soo. I had originally planned to go through Minneapolis and down I-35 but, after pricing hotels and finding a Super 8 was $100 in that area (probably due to the oil shale exploration folks), I opted to go via Green Bay and Appleton where a king bed room could be had for $55. 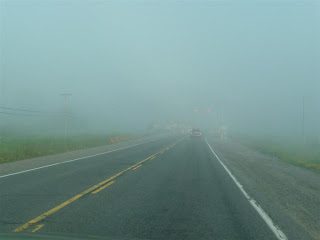 I slowed the pace to 55 MPH into the head wind as I wished I had gotten more than four hours sleep last night. We noted going through Blind River that the large side parking lot at Tim's was blockaded. I have no idea what this will do to business since there is often not enough room to park even with the side lot.

The trip to the Soo was uneventful but I did see a GoldWing trike towing a one wheeled Uni-Go trailer. That was an odd combination since the Uni-Go's forte is being able to lean with the bike. We met the highway line painters again near Bruce Mines and then made a pit stop at a picnic area just west of there. It looks like the province may be saving money by not putting chemicals in the outhouses because they were pretty rank. 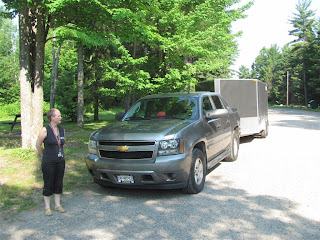 In the Soo, we took the truck bypass so we could stop and see Spyder's new gastronomical emporium, which is about two blocks from my brother Dave's house. Last Minute Mama's officially opened yesterday and has a large menu including stuffed chicken wings. We still don't know how they stuff them. Spyder and Jake were getting set up for business when we rolled in. They offered to make us a sample but we will stop by on the way back instead when we can really enjoy the food. 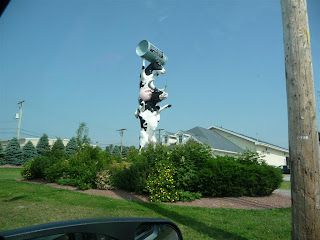 Strange cow behaviour in the Soo 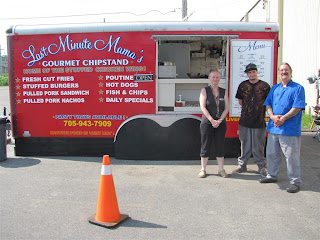 We rolled onto the International Bridge at 11:10. It didn't seem too backed up, but we didn't clear the border until noon. Time in the booth was brief, however, and they once again did not ask to look in the trailer. Or drag me inside for secondary inspection. 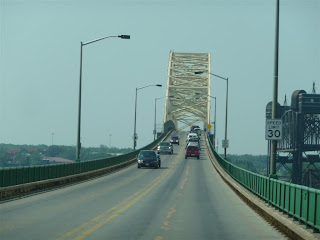 Made it directly to the second span 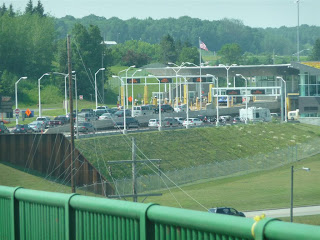 And sat for the longest time watching the traffic not moving

We took M-28 west to Newberry, Michigan where we fueled and got lunch to go at McDonald's. There was a  stretch of nasty road construction on 28 that I couldn't wait to get out of. 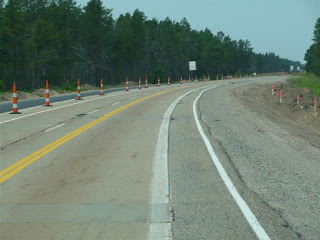 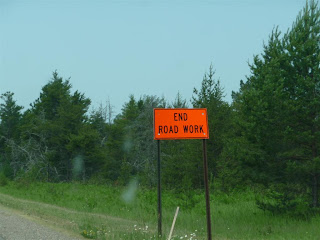 From Newberry, we took M-117 south through Engadine to Highway 2. I was reminded of the trip in 1988 where Terry, Leo and I plus two others were heading for Cody, Wyoming and were clocked at 79 MPH in a 55 on this stretch. The trooper was nice enough to knock all five tickets down to 60 in a 55. That has been my only US speeding ticket.

We followed US 2 along the north shore of Lake Michigan past Gladstone to Escanaba. 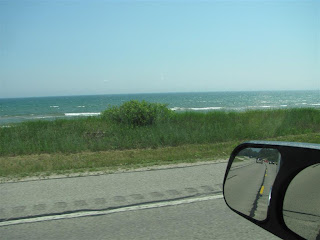 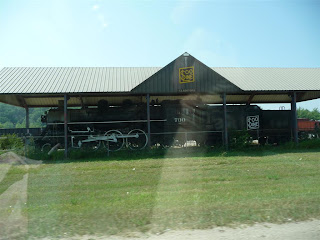 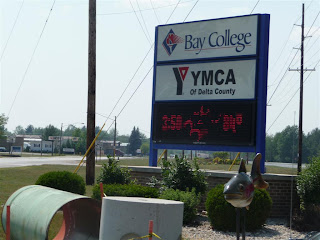 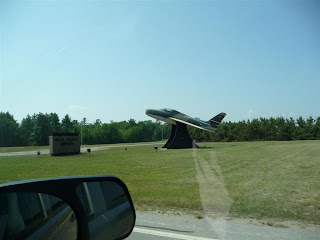 From Escanaba, we followed M-35 to Menominee, Michigan and the Wisconsin border. In one curve, I had to brake hard when a minivan passed us on a solid line with oncoming traffic. And I was doing 5 MPH over the limit at the time. Too close. I thought of Ron and Brad when we went by the Menominee Tourism building where we helped the lady move a pallet of promotional brochures as we were passing through a few years ago.

Once in Wisconsin, we followed US 41 to Green Bay and Appleton. I got a good quote from Jesse Ventura while listening to XM. "Now that I am retired, I wake up in the morning with nothing to do. By bed time, I've done about half of it." In Green Bay, we came to a stretch obscured by smoke and saw firefighters battling a structure blaze. 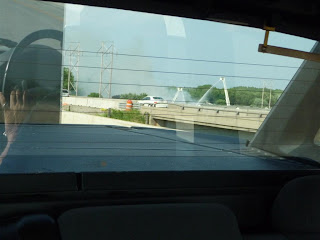 Fighting a fire in Green Bay

We fueled in Appleton and then checked into the Super 8 twelve hours after leaving Sudbury. It was a nice hotel with a friendly young lady on the desk. The WiFi wouldn't connect at first so I called the desk and she reset the router. Then all was well. We walked a short distance to Applebee's for supper where Elyse served us. Another cheerful, friendly Wisconsinite. We had the appetizer and two entrees for $20 deal. We chose boneless wings for the app and split an oriental chicken salad and a 7 oz sirloin. We could have just split one entree and been just fine.We'll see if we can restrain ourselves in the future.

I watched the NASCAR Daytona night race as I posted bills, uploaded photos and transcribed notes for the day. I got the blog entries for the Canada Day weekend and Trucker's visit posted but didn't get today's entry finished. Checking our potential destination for tomorrow, Chamberlain South Dakota, I see it is also in a zone of $100 Super 8's. This time we don't have an alternate route. As for the NASCAR race, the fickle finger of fate took out some of my Fantasy League drivers. As usual.

I managed to get to bed before 11:00 PM although Sandy had turned in long before. A good first day on the road. 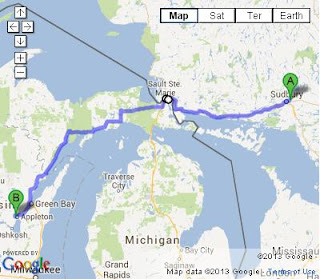 Hey Skid if you are coming through the Twin Cities around lunch or dinner give a call. 715 307 1883. Bugsplat.

The fact that you found ANY road work happening in Michigan is a BEEG DEEL! Figures it was a road used by, maybe, 50 vehicles a day...