Sandy woke me at 5:20 this morning. Oh well, I said I wanted an early departure. We had everything packed and loaded in the truck by the time the continental breakfast opened at 6:00. While Sandy had her raisin bran and I drank coffee, we talked to a nice older couple from Menominee, Michigan who were joining a bus tour to new York City.

We were moving south on US 41 by 6:30. There was hardly a vehicle or person to be seen this early on an Appleton Sunday morning. As we drove south on the six lane highway with a large concrete barrier down the middle, I spotted a very confused looking large box turtle in the centre breakdown lane. We were past before I realized what it was or I would have stopped to help it over the barrier. 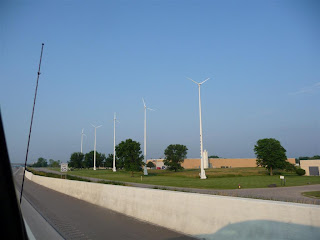 In Oshkosh, we took the exit for Wisconsin 21 and immediately ran through two roundabouts. Not as bad as the seven we faced in The Dells a few years ago, but these were also brand new. It looks like the state has really committed to them. 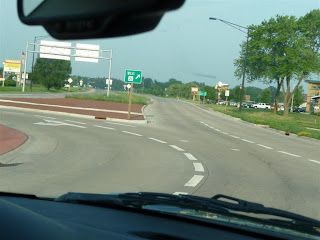 Oshkosh is even prettier than Appleton. Then we were out in the scenic green rolling Wisconsin countryside. Some guy on the radio said "Life is a tragedy for those who feel and a comedy for those who think." There, the quote of the day. We drove through a few small towns before stopping in Wautoma for coffee and a sausage McMuffin. 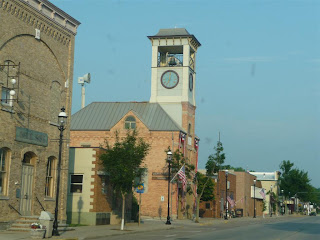 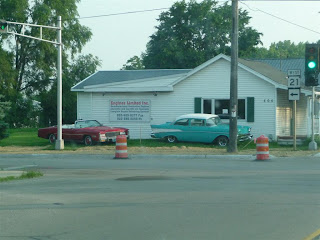 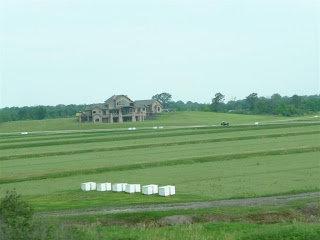 I saw a bald eagle flying east parallel to 21. I thought it was another vulture at first but the white head gave it away. We reach I90/94 at 9:15 and I wondered why I was starting to feel tired again this early in the day. As we approached Lacrosse and the Minnesota border, I stopped at a rest area to walk around and splash some water on my face. 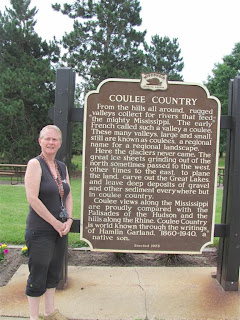 Then we were through the construction on the bridge over the Old Man River and into Minnesota, where we started to climb out of the valley. And climb. 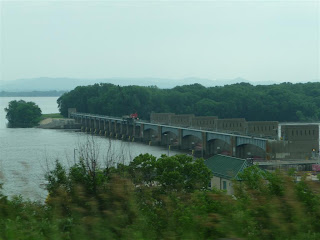 Minnesota had a more washed out appearance than the lush Wisconsin. We drove along up and down the  long, slow grades as we passed small towns from time to time. We passed a number of wind farms, although many turbines were not turning. Those that were confirmed the headwind we were facing. There were also sections where I-90 was down to one lane each way as we went past miles of orange barrels. We stopped for lunch (to go, as usual) in Albert Lea and for gas at a station in Alden, a nice little town with the gas station as its only business. 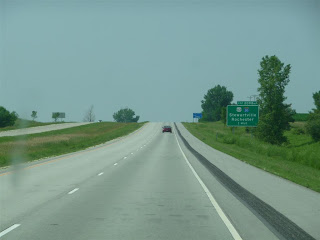 Rochester - home of the Mayo Clinic 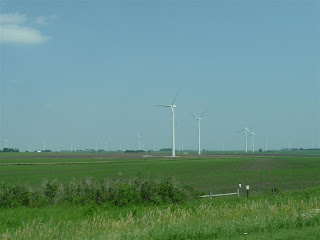 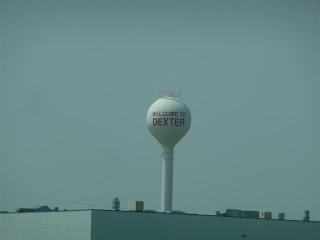 That reminds me what's on TV tonight.....

I cut the speed back to 55 MPH and saw the mileage indicator improve. The wind was now out of the south but was still pushing against us. I  was being passed by half ton pickup trucks towing trailers, some of them as big as ours. At the pace they are going, I have to wonder what mileage they are getting.

Outside Worthington, I saw a very nice industrial building with large lettering that said Hitchdoc. I've used their hitches before. We stopped at a rest area while still in Minnesota for another walk around. I talked to a couple from Alberta on a Harley as well as a man and his son on a 2004 Wing. It was hot and humid enough that I was happy to be back in the air conditioned truck.

A bit earlier, Sandy had taken a picture of a trike from behind but we didn't catch him. He was here in the rest area and slowed down when he saw me getting ready to take a picture. 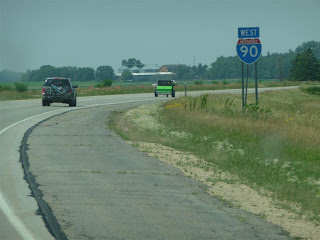 Trike in the distance 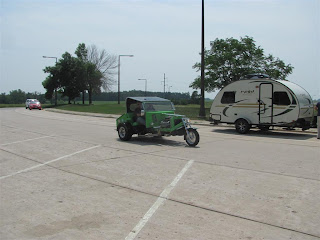 It was 32 C (90 F) as we plugged along and crossed the border into South Dakota. 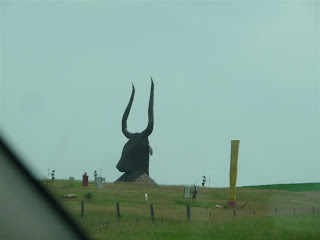 As we approached Mitchell, we could see some weather cells building on the horizon. We stopped and fueled at a Shell that used to be a Pilot. The regular gas was $3.69 while the mid-grade was $3.49. This phenomenon means that regular is ethanol free and lets you know how much the motoring public appreciates alcohol in their fuel. We did NOT visit the Corn Palace. Sorry, Gary, it isn't on our bucket list:-)) 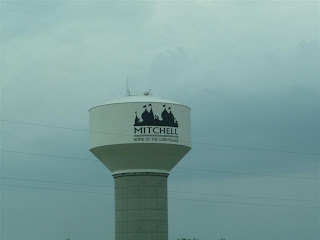 Still no visit to the Corn Palace

We encountered another stretch of orange barrels starting in Mitchell and extending west. I was still not totally awake when the phone rang. It was Heather looking for Sandy's chili recipe. The conversation propelled me into second wind territory and I didn't have any urge to nod off after that.

The afternoon weather cells changed to what looked like a nasty storm front. We found a local FM station that was passing on severe thunderstorm warnings. They named to counties which did us no good at all since we have no clue where each of these counties are. Then Sandy dug out the Road Atlas which did have the counties marked. We found the worst of it, with large, damaging hail was passing south of us.

The rain was heavy for a bit and the winds were gusting so I slowed to 40 MPH and put the four way flashers on. There was significant water build-up on the road but it was all controllable. The temperature dropped from 32 C to 19 C in a matter of miles. Before too long, we were out the other side and approaching Chamberlain, our destination for the day. 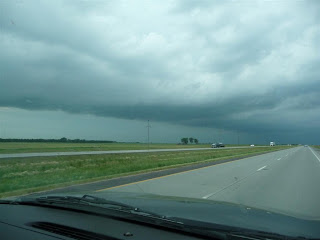 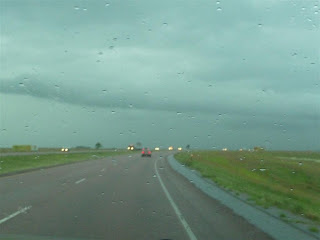 Starting into the rain 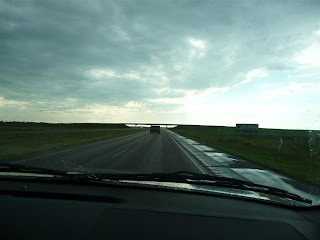 And out the other side 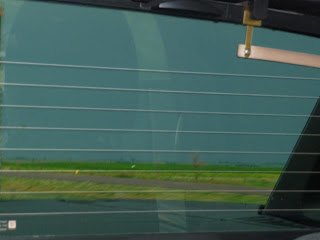 Through the back window 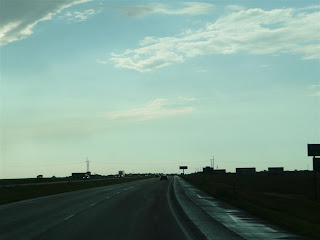 And then it was all over 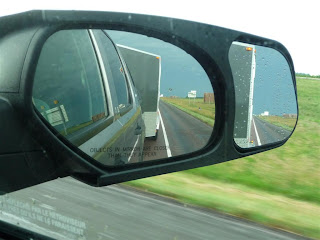 Do I have enough mirrors?

I stayed in Chamberlain, SD back in 1980 on my way to Sturgis. It hasn't improved with age. Remembering our supper last night, Sandy and I decided we would pick up Subway on the way to the motel. There were a few people in line but the line was so slow we went to McDonald's instead. We decided to split an Oriental Chicken salad and ten McNuggets which we took to the motel via a scenic route imagined by the GPS. 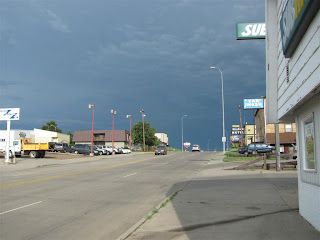 There are Super 8's and then there are Super 8's. This was one of the latter. It sits high on a hill overlooking the Missouri River. We couldn't get Sandy's tablet to hook up to the WiFi and the front desk said that was just the way it was. Apparently there was a sign I didn't see at check-in that said the WiFi was flakey. Then the TV channel guide didn't match what was actually on the TV. But it cost almost double what we paid for that nice place in Appleton last night. Oh well, locale dictates quality.

We did talk to a nice lady from Connecticut. She and her husband are meandering their way home after a camping trip out west. We wished her well in their travels.

Sandy read for a bit and then went to sleep as I took care of my end of day chores. Then I hit the sack before 11:00 PM. 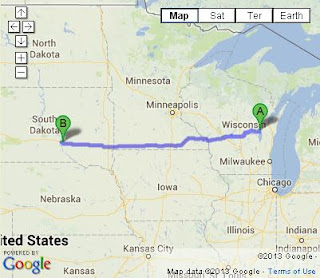