Sherm cooked breakfast this morning. Sausage patties, scrambled eggs, toast and gravy. An excellent start to the day. Then he called the Honda dealer where he and Pat bought the Accord to see if they had time to change the oil in the Avalanche. They did.

We unhooked the trailer and drove the truck over to Findlay-Nolte Honda on Stockton Hill Road. Dave the service writer got the details and told us the truck would be done soon. As promised, it was soon back out in the lot with oil and filter changed and chassis lubed. Total cost, including a complimentary wash, was $36.00. There was, however, a wrinkle. They take samples of all the fluids they check, something I have never seen before, and the rear differential fluid was scorched. They suspect the wrong fluid was used the last time it was changed and, considering we will be pulling the big trailer across the Mojave Desert, I suggested they go ahead and change it. I knew the power steering and brake fluids were getting near the end of their service lives, so I figured they should change them all. We took the courtesy shuttle, driven by a Harley riding refugee from Missouri, back to the house.

Sandy and Pat had already gone shopping, so Sherm and I took the bikes and went by to pick up Kenny. The first stop was at Carl and Ed's to see their new toy. After Carl sold the '52 pickup to Sherm, he felt a need to get something else to put in the garage. He got a 750 CC V-Twin four seat Kawasaki Teryx. This looks like quite the beast to prowl the desert with. 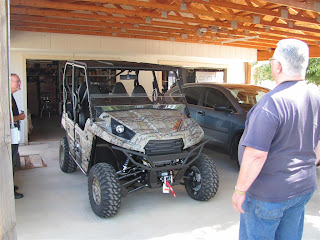 Sherm and Carl admire the Teryx

Since no visit to Kingman would be complete without a jaunt on the Mother Road. We headed out Route 66 for the short ride to Hackberry Store, a blast from the past. Sherm asked me to lead and set the cruise in 65 to keep the pace legal.

At the store, I met a Harley rider fro Toronto named Ed Murphy. He had ridden via Georgia and was planning to spend a few days in Loughlin, Nevada before continuing on. He is the past owner of both a Nomad and a Lees-Ure Lite camper trailer. 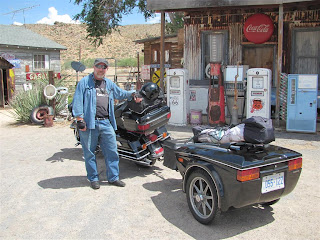 Ed Murphy of Toronto at Hackberry

I got a diet Doctor Pepper and joined Sherm and Kenny on the bench out front. It was comfortable in the shade and we passed the time watching a gecko and several extremely comely ladies. This is a popular stop for those who eschew I-40 for the old road. 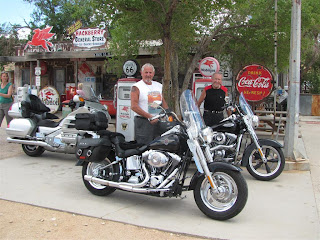 Kenny and Sherm at Hackberry

On the way back to Kingman, Kenny wanted to stop and chack out a used trailer for sale. It was 6 x 12 and had dual axles, rare on a unit this small. Unfortunately, Ken had misread the price. $4,500 was too much. We continued back to town, catching a few raindrops from the large rain clouds once  again blanketing Dean Peak in the Hualapai Mountains. This continuing precipitation would have been appreciated during the recent fire. 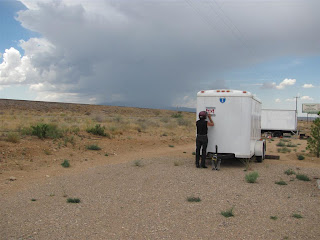 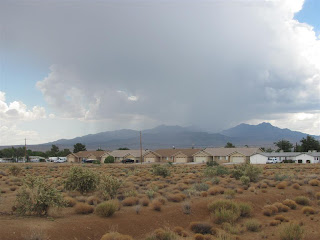 More rain over the mountains

Back at the house, we put the bikes in the garage. Pat and Sandy came back from a successful shopping trip. At about 1:30, Sherm called the Honda dealer and found the truck was just being finished up. On the way over in the Toyota truck, we stopped and found the local wireless company had switched from dealing Sprint, Sherm's provider, to exclusively selling Verizon. Then we made a stop at WalMart where Sherm got bananas and vitamins and I got my Tracfone extended for another year.

The Honda folks had the truck ready. It cost a bit but not nearly as much as differential failure and I'm good for quite a while now. I took it to get fuel and paid $3.37 per gallon. Lowest price of the trip. Then I brought it back to the house where we hooked the trailer up and loaded the bikes.

Around 5:00, Carl, Ed, Kenny and Thelma arrived and we all headed over to Golden Corral. I managed to restrain myself and only eat a lot instead of the more typical too much. Neither Sherm nor I took any pictures. Sorry about that.

After supper, we stopped by the place where we stayed a couple of years ago. The Joshua tree that bit me back then is much taller now. 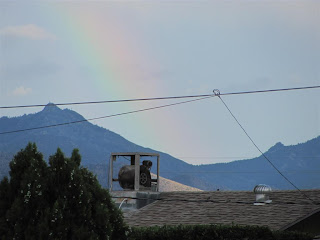 Rainbow over the desert 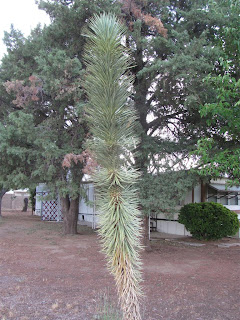 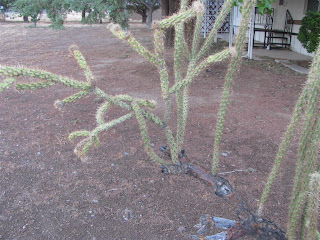 Back at the house, I finished blogging and we watched some TV. Tomorrow, we head for California. 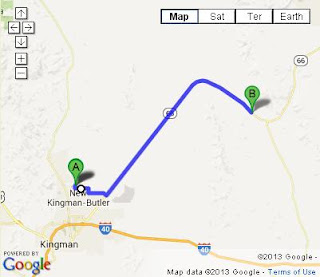