For a change, we were not in any rush this morning. Sherm and Lanny would be meeting Stewey in Casper, Wyoming at 9:00 Mountain time and a front tire change would then follow. Stewey had delaminated his and needed new rubber. Since the goal was to arrive in Deadwood at about the same time, I finished yesterday's blog and we went down for the continental breakfast. The heat was starting to build already as we went back to the room. 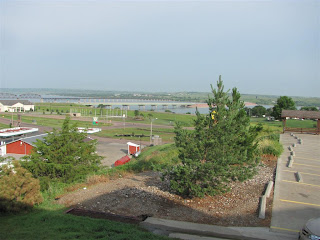 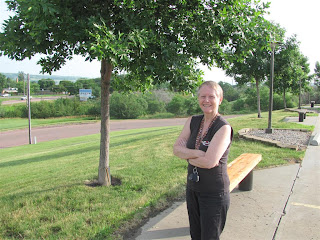 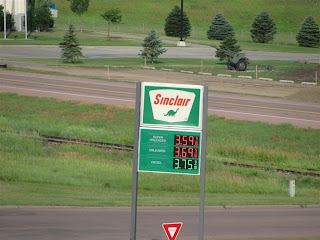 After a short panic when I couldn't find my electric toothbrush (we found it right where  it was supposed to be), we loaded the truck and were rolling by 8:30.  This would be equal to 7:30 Mountain Time in Deadwood. We crossed Lake Francis Case, as they now call this wide spot in the Missouri River backed up by the Fort Randall Dam, and went up the hill past Al's Oasis. This is where, in the summer of 1980, I learned that prime rib was meant to be eaten rare. 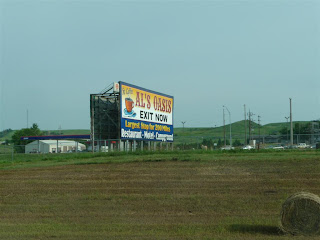 I had forgotten how hilly the countryside was here. Ups and downs, hardly ever level and there was a crosswind from the south. For some reason the cattle in field after field were huddled together. I don't ever recall seeing this behaviour in so many herds at once and have no idea what it means. 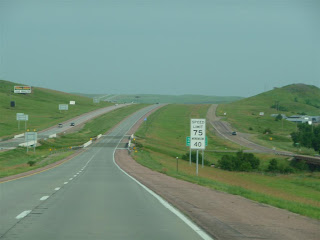 The rolling hills of South Dakota? 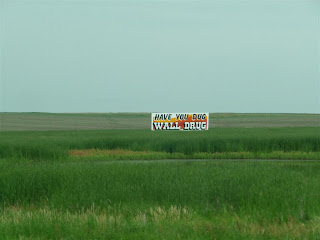 If you've been out here, no explanation is necessary 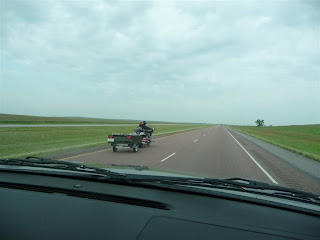 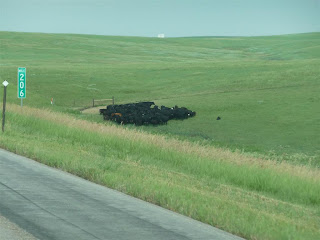 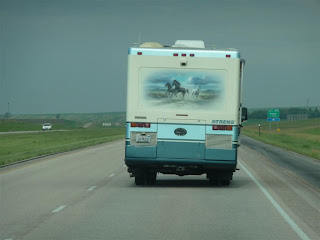 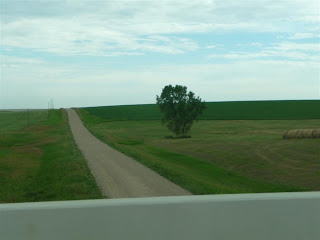 I got all the way to 10:00 AM before I started to get tired. I do believe out here that driving is just so numbingly boring that it is hard to stay awake. We stopped at a rest area where I straightened the bike up in the trailer. It was a couple of inches off vertical and I'm fussy that way. I also took a picture of a storm cell ahead of us. 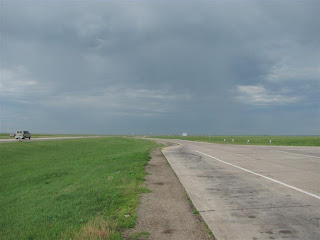 With the wind from our left, the truck is will pull left whenever a semi or large RV starts to pass us. No big deal, the RV did the same thing. Today, one went by and set up an oscillation between the truck and the trailer that threatened to get out of control. I had visions of going off the road and rolling through the fields as my foot pressed the accelerator to the floor. The truck kicked into second gear at 65 MPH and pulled us back straight but it was a scary moment.

I do like the flexible posts they use out here to separate the lanes in construction zones. They are a lot less threatening than the concrete barricades we are more familiar with. Around Wall, there was a long stretch of two lane as they reconstructed the two eastbound lanes. From the amount of crushed rock laid out so neatly, I realized that when they decide to rebuild a road out here, they go all the way. 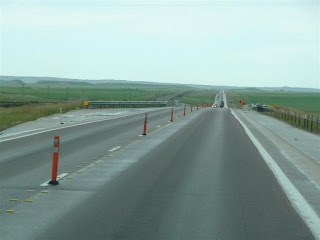 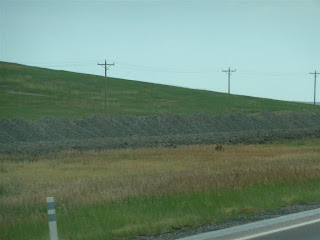 That is one large amount of crushed rock

As we approached Wall, the fringes of the Badlands came into view. We went through them the  last two times out here so decided to give it a miss this time around. As I adjusted the clocks for Mountain Time, I wondered why the GPS wasn't smart enough to know what zone it was in. It has satellite time and a precise location and I still have to manually set it every time we go from one to another.  Soon, we passed the Conoco station at the Wall exit where I either lost, or someone stole, Sandy's sheepskin seat cover two trips ago. 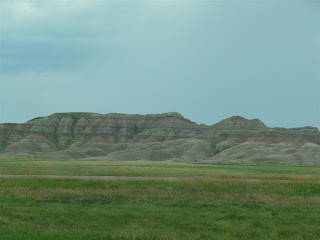 The edge of the Badlands 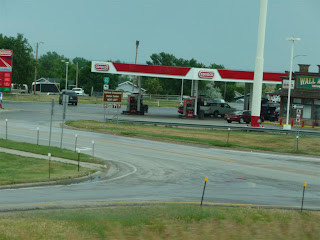 We reached Rapid City and found the WalMart where we had spent the night with the RV two years ago. There were a lot of motorhomes and trailers here and I saw two diesel pushers in what I knew to be the only level spot in the lot. We also saw a huge blue rig that could have been hauling as many as four cars in the massive trailer behind it. Lettering on the side of the truck indicated it was not for hire and registered as an RV, probably to keep the DOT enforcement people at bay when they bypassed a scale. 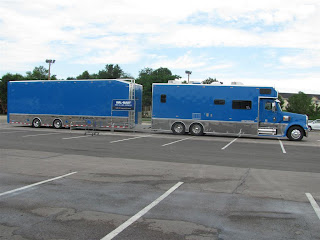 This is a serious RV

In WalMart, we picked up bottled water and some hair shampoo while returning a three-pack of defective underwear I bought in Waynesville, North Carolina on our last trip. I like that you can do that. Then we followed the GPS instructions to to a Culver's restaurant where I had a mushroom Swiss butter burger (I love the flavour) and Sandy had a very good order of chicken tenders. The man who took our order told her that if she was having the Culver's root beer, not to add ice because it would cut the special taste. Good to know. They give you a number for your table and then bring the food when it is ready. Sandy had a caramel cashew sundae for dessert. 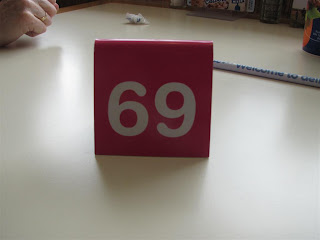 Our table number at Culver's

We fueled at a Pilot station that didn't require a Zip Code for pay at the pump and then continued west on I-90 towards Sturgis. Sherm called to say they were having lunch in Newcastle, Wyoming and would see us soon.

We got off the big road in Sturgis and followed 14A to Deadwood. I had forgotten how curvy the road through the canyon and up the mountain was. As we drove through Deadwood, we saw a new establishment advertising a Randy Travis concert on Wednesday. We found later that Travis was very ill in Texas and was not expected to be here. We arrived at the Gold Country Inn at about 2:00 PM. 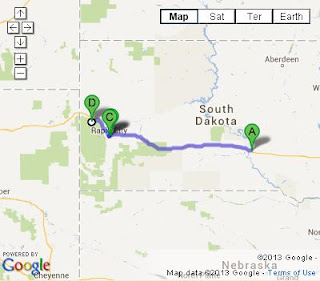