I was worried about checking into the hotel since the room was in Sherm's name but the lady on the desk didn't care as long as I was able to pay. She said i could park the trailer across the street. The room wasn't the same one we had last time but it was even bigger.

Sandy and I unloaded the bike and parked the trailer. When I unhooked, one wheel chock slipped so I found myself holding back a ton of trailer while Sandy put down the second set of chocks. Then we carried all the bags into the room. I wondered how we ever travelled with just motorcycle luggage. 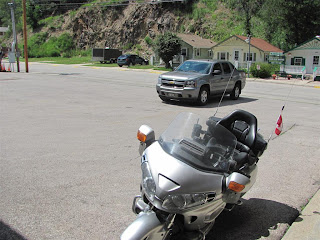 The bike, truck and trailer

The WiFi would not connect. I spoke to the desk and she said to wait until the girl came on at 3:00 PM. We were still waiting when Sherm, Lanny and Stewey pulled in about 2:40. Their WiFi didn't work either. Soon after, a thunderstorm came over the mountain, drenched everything and then rolled on. The new desk girl called the Internet guy who came out and got things all sorted out. On line again, which is more than we got two years ago. 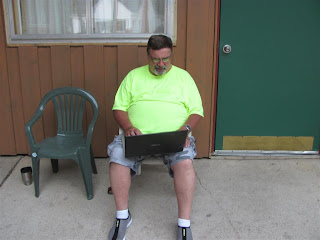 About 5:00, Stewey's wife May, daughter Wendy and granddaughter Tighler arrived from Peoria, Illinois. He had been out touring Colorado for a week. Talking about supper, we all paid the $1.00 to take the trolley that stops in front of our hotel. We rode it for at least five miles before getting off about three blocks from the Gold Country Inn. We had supper at Diamond Lil's, part of Kevin Costner's White Diamond Casino. 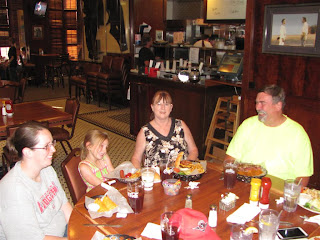 Plus Wendy and Tighler on the left

We walked around downtown for a bit and then trekked back uphill to the Inn. Lanny remembered a stuffed buffalo and we tracked it down. 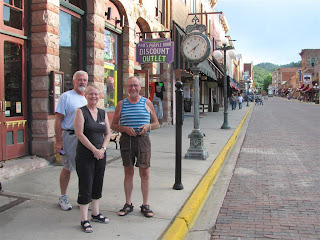 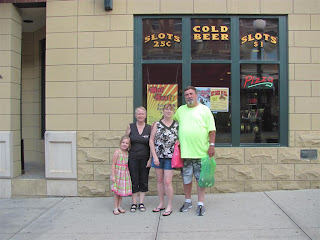 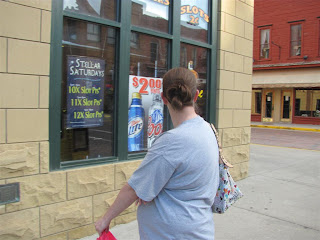 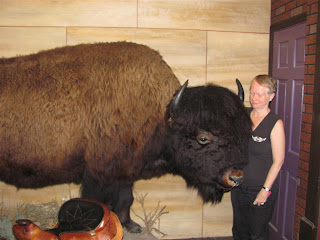 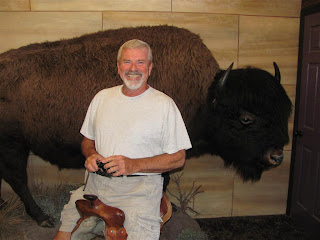 Lanny and his buffalo 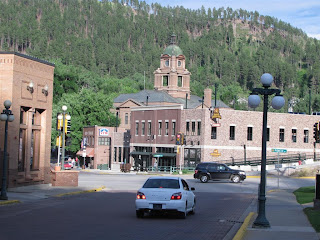 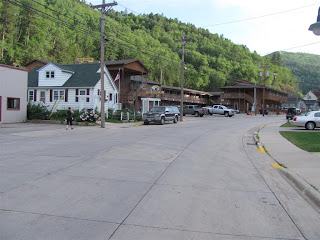 Back at the hotel, some of the Arkansas crowd had arrived. Magellan, Brian and "the other" Duck were here and our organizers Jamie T and Trouble stopped by. You may recall they live just up the hill in Lead. I am actively campaigning to change Jamie's name to Rocky. No one had figured out why so I broke down and told him.

He acknowledged that fit him and said he would think about it. I suggested he might not have a say:-))