As soon as we arrived, Penmaker appeared to greet us. He left Deadwood the day after we did and was riding with Cranky on US 50 when the latter blew a rear tire. Cranky should be along tomorrow after having to wait for a new tire in Ely, Nevada.

WiFi had been spotty here the last few times but they now have to good access points. This will make life a lot easier over the next few days. 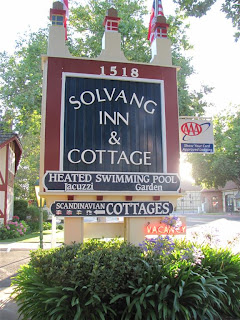 Our home for the next four nights

Soon after we got here, Ray and Sue from San Diego pulled in, he riding their Voyager trike and she driving the car. Sherm went off looking for an electronics shop (Harleys + shorts = burnt legs) while I actually wiped a few Black Hills bugs off the Wing before anyone could get a camera out.

Before too long, Cat and Jim arrived. Then Lanny rode in. After that, it was Nite Lite and Linda in their red Kia. We also had Wes, who was here the last time we were. he rode a Harley then and a black Vaquero now. Ed from Sam Mateo, attending his first VROC rally, was the last to show up. 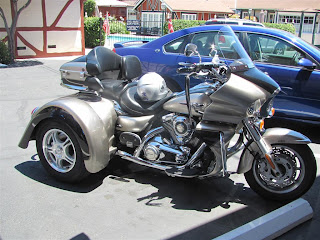 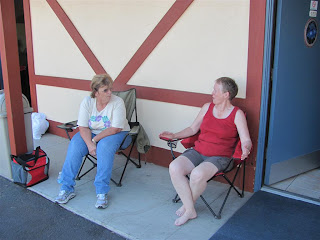 Sue and Sandy getting to know each other 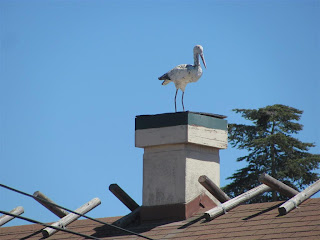 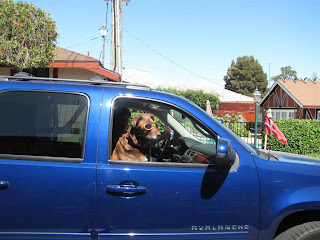 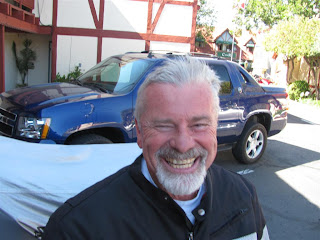 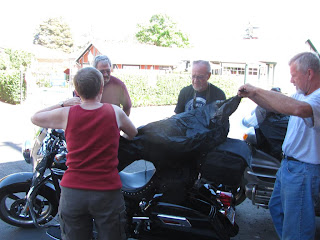 How many people does it take to cover a Harley?

Later in the afternoon, we covered the bikes and then headed across the street to the Solvang Brewing Company for supper. We were a few minutes early, so we waited while they set a table for the thirteen of us. Sandy had a chicken Caesar salad while I ordered a pulled pork sandwich and fries. We traded half a meal for some real variety. Conversation was good, as was the food. Penmaker and Sandy were celebrating birthdays today, while Linda and Cat will be in the next couple of days. The manager sent each of them creme brulee with strawberries and a birthday candle. 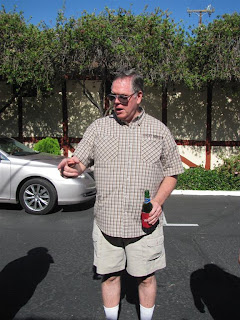 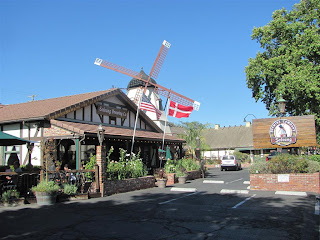 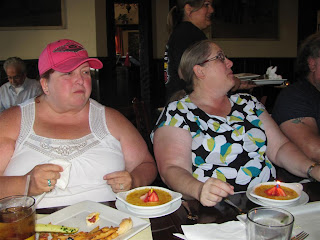 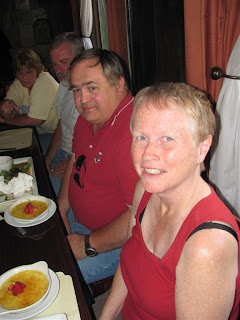 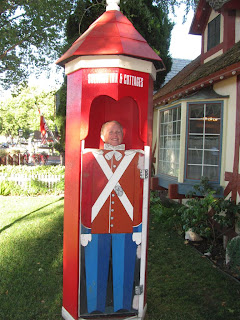 After supper, the whole group congregated in the courtyard to reminisce about old times. As the sun went down, the evening cooled off significantly. We ended up returning to our room around 9:00 PM, where I finished the blogs for the day. 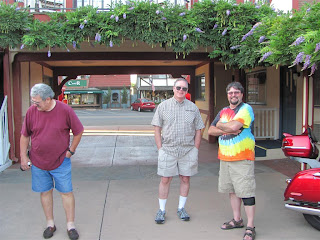 Ray, Wes and Jim in the courtyard

Tomorrow, we have the motorcycle museum tour at 10:00 AM, and then we may have to take a short ride to see some countryside.
Posted by Jim "Skid" Robinson on 7/17/2013