We left Springfield just after 7:00 AM Central time. It was a still morning, clear and cool but not cold. From here, we were on our regular commute path to and from Eureka Springs, Arkansas so the rest of the way will be familiar. 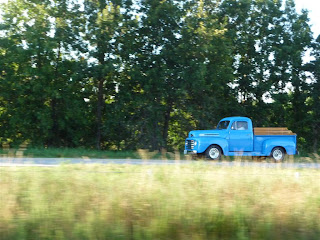 Seen as we were leaving Springfield

As we drove up and down the grades on I-44, I came up with a hypothesis as to why truckers move to the left lane when they pass vehicles stopped on the shoulder. It isn't for safety, it is because they are bored and are looking for any variety they can find.

The trucker's XM channel was talking about the North American Fatigue Management Program, developed in Alberta to look into ways to tired over-the-road drivers. After experiencing just that on many days of this trip and believing it was a contributing factor to my vertigo issues (which returned yesterday), I need to look into this.

I suspect another cause of my personal problem is a lack of hydration. Reflecting back, I haven't had hardly any water on the days I had trouble. Today, I will hydrate liberally and see what happens. 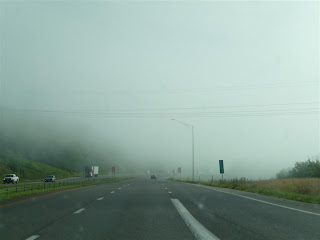 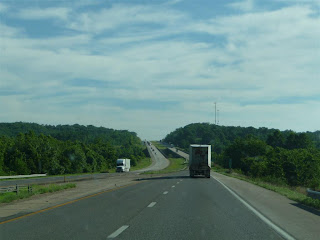 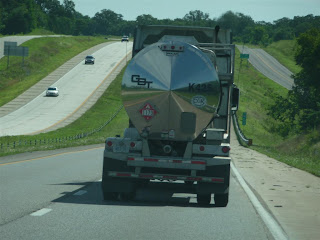 Amazing that we can't see ourselves

We stopped at a McDonald's in Rolla where a very cheerful guy served us breakfast. I also paused at a gas station there just to scrape the bugs off the windshield. There was a fuel stop in St. Clair, near St. Louis. This was where we met that tour bus last fall on our way to ES. As I was watching the pump, two Sheriff's Deputy cars went by on the cross road, sirens and lights going and pedal to the metal. Those Chargers sure can move when they have to.

We went through St. Louis on I-44. Just as we were starting up the ramp to I-55, a truck ahead of us towing a trailer with ladders and building materials came to a sudden stop. I wish the lights on his trailer worked. I was glad both my trailer lights and brakes were functional because I barely avoided hitting him while the car behind managed to avoid me. It turns out that another car broken down on the ramp was the cause of the initial stop. 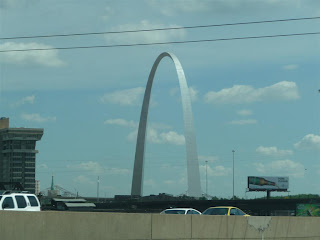 Gateway to the West (Defiance, anyone?) 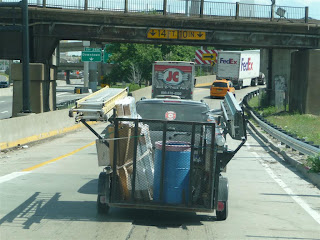 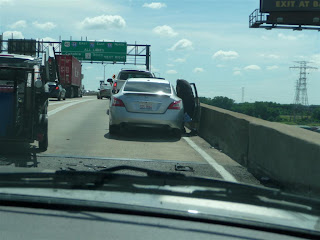 The cause of the bottleneck

Leaving Missouri, we followed I-55/I-70 to where they split. This is where, in 1978, Sandy didn't tell me she saw the sign for Indianapolis as I was passing a tanker throwing stones and gravel on us. The next exit on the way to Chicago was about ten miles up the road. We still talk about this. 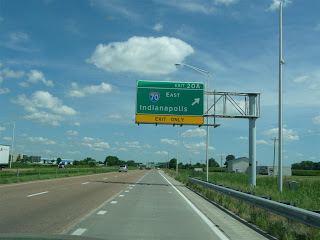 Gas just across the Illinois border was $3.81 per gallon. Luckily, we didn't need any at that particular moment. We stopped at the welcome centre where I found a nice bench in the shade with a cool wind blowing and I rested my eyes for a few moments.

Just out of the rest area,  we encountered a construction zone with single lane traffic. The sign said the speed limit was 45 MPH, photo enforced, with a $375 minimum fine. No problem there because the traffic was crawling bumper to bumper until we got past the flag person. Then we got up to speed again. 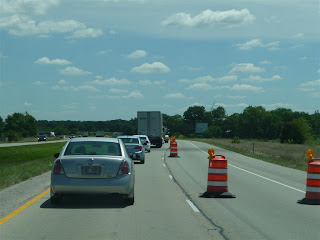 I-70 across the Land Of Lincoln looks pretty flat but it is actually mostly a gradual uphill climb. Both ways, it seems. But the land is green and lush, the very ideal that goes through my head when I think of Robert Heinlein's Green Hills of Earth. Mid-state, gas prices were $3.59, much more reasonable than out first impression.

A quick gas and lunch to-go stop in Casey gave me a chuckle. As we pulled out, the GPS said it was 106 miles to Indianapolis. It wasn't dark but we had a full tank of gas, half a pack of cigarettes and I was wearing sunglasses, so I hit it:-)

I got my daily quote from comedian Steve Gilliland along this stretch:

"Labeling is disabling. You have to appreciate all people." 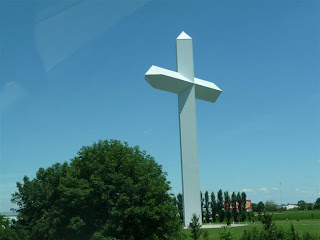 We crossed into Indiana near Terre Haute. 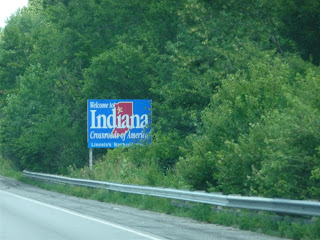 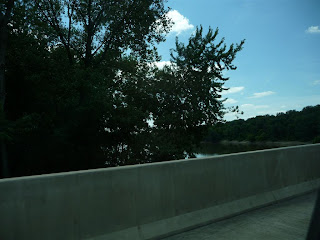 Indiana was so nice for the first five miles. Then we reached the first construction zone. Everyone stopped. We eventually crawled down to the merge and traffic started moving. Then it was back to four lanes for a couple of miles before we all stopped and went through the process again. We did this four times so it took us two hours to cover 30 miles. I have no idea why we spent so much time stopped since we never saw any flaggers. In fact, in the whole stretch we only saw one crew doing any work at all. 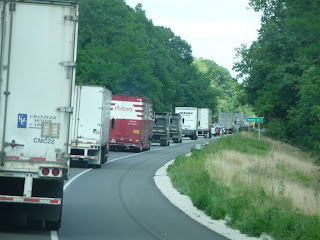 No one going anywhere quickly in Indiana 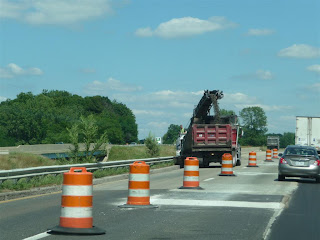 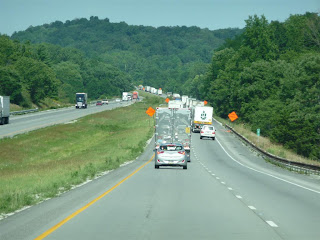 Another stop and go line on I-70 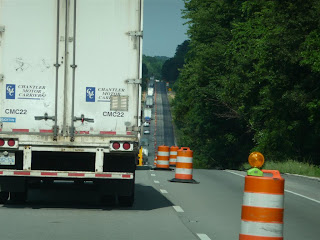 Eventually, we cleared the orange barrels (I really should see who makes these and buy stock) and continued to Indianapolis. I had targeted Fort Wayne as our destination for the day but remembered that I don't much like that city. Twenty miles north is the pleasant community of Auburn, Indiana where we have stayed before so I reset the GPS.

The infernal Garmin wanted to take me through Indy on I-70 but it was near rush hour and I opted for our usual route on the south I-465 loop. Traffic was busy but flowing well and we soon had Circle City in our rear view mirror as we plugged along on I-69 North. I made one more gas stop in Muncie where we got Subway to take with us. The wind was neutral, the grades were slight, the traffic was minimal and the driving was very pleasant. Somewhere along here, we gave back our last hour as we entered the Eastern Time Zone.

The Super 8 in Auburn had lots of room in its parking lot. In our ground floor room, we ate our sandwich and I posted the receipts so I could make a list of what we bought for the Customs Man tomorrow. Then we walked next door to Walmart for water bottles (the hydration worked very well at keeping me focused today), a box of 5 Hour Energy and some more flavoured coffee creamer singles (no Irish Cream in stock). Back in the room, I finished another couple of blog days and got to bed late. This will hurt tomorrow as we run the final six hundred miles to home.

I've been thinking about traveling across the USA at five or six hundred miles per day. Each evening, it is like you are in a different country. Accents, idioms, customs and dress change. But, amid all these differences, Wally World remains the same. There is a message in there somewhere. 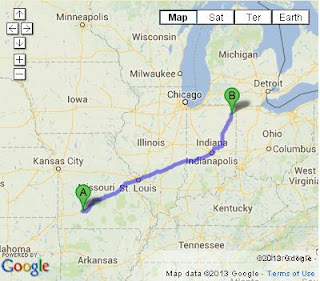 That was a nice ol' Ford! Someone took real good care of it!

Moving a lane over for a emergency vehicle is the law in a lot of states, they'll give Ya a ticket if Ya don't!

You drove about 100 m south of where I was bored and raised.

No trailer lights? What, that blue barrel not big enough for ya?

Jim, dehydration is a big contributor to my vertigo. For me, it's either dehydration of an ear infection as the root cause. Over the counter meclazine (dramamine 2, not the original formula) works for me.