The dawn of the last day of a road trip is always a bittersweet experience. It seemed like I was still on Arizona time as I dragged myself out of bed later than planned. Or maybe it was going to sleep at 2:00 AM after finishing a couple of blog days (only one behind now) and posting the receipts so I could make a list of purchases for the Customs Man. Regardless of the reason, Sandy was up and moving briskly while I struggled.

After enjoying the usual continental breakfast (Raisin Bran and yogurt), we checked out, fueled at a nearby Speedway and were northbound on I-69 under partly cloudy skies at 7:45 AM. I had decided to go via the Soo to avoid Friday southern Ontario traffic.

We crossed the Michigan line early and appreciated the road work they did a few years ago on this interstate. It was much better than the jolt we get when we enter the state on I-75. 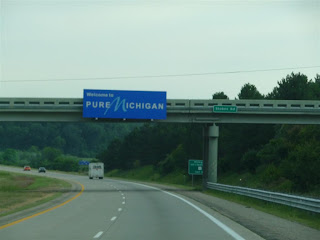 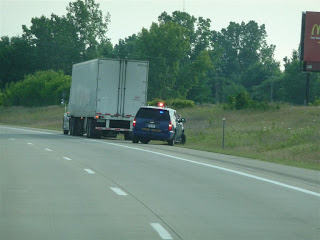 And a special welcome to Michigan

We made a fast stop in Pottersville for second breakfast to go from McDonald's. You may have noticed we have been supporting Ronald quite a bit on this trip. It is quick, relatively consistent and Sandy has become addicted to their Blueberry-Pomegranate Smoothies. This was a smart marketing move on McD's part since a large smoothie easily makes up 1/3rd of our typical bill. This location had a place for truck parking but it was full of trucks so we had to park across the street.

We fueled again at a small and congested Speedway in Clare, Michigan. This tank would get us all the way to the Soo. Traffic was busy as people appeared to be heading north for their weekend getaway. After connecting with I-75, the winds picked up and got gusty around Gaylord.

Along this stretch, we heard on the radio that a squirrel had tested positive for bubonic plague in the Angeles National Forest in California. There was a sense of connection because this large tract lies south of Highway 14 and the Pearblossom Highway, part of our recent route. 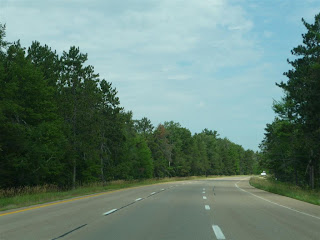 Lower Peninsula trees - so unlike the southwest

As we approached the Mackinac Bridge, the winds died down. The temperature was a seasonal 75 F and we had a pleasant crossing with both lanes open all the way across Big Mac. 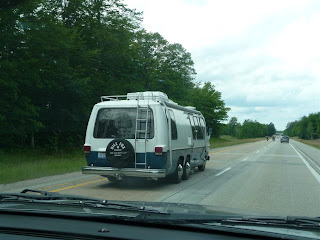 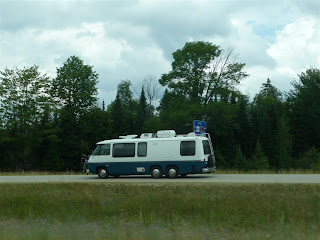 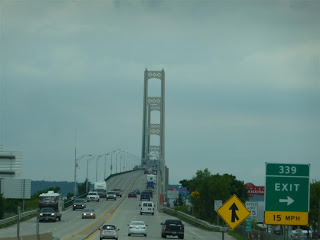 A good day on the Big Mac 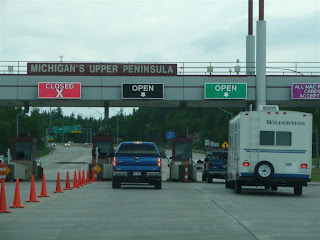 Welcome to the UP

Once in the Upper Peninsula, the traffic volume dropped significantly. There was a line of orange barrels reducing us to one lane all the way to the Detour Village exit. All those barrels and not a single sign that any construction was going on. And whoever set the barrels out put them on our side of the dotted line, further reducing our path. A few were out of line so I had to hang the trailer wheel over the line on the left. Luckily, there was new asphalt and they hadn't cut in the rumble strips yet. 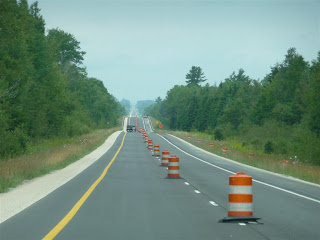 Orange barrels in the UP 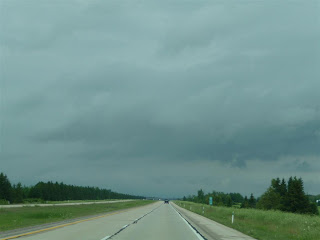 The final gas stop was at what used to be the Citgo in Soo, Michigan. It is now a Krist and actually has pay-at-the-pump. This wasn't the only change as the McDonald's next door has completely disappeared. I have to note that the UP gas prices are steep but still nowhere near as bad as Canadia. 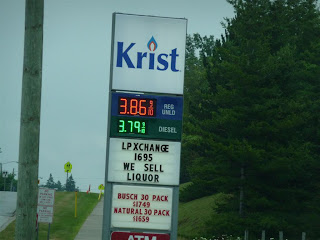 We started over the International Bridge at 3:18. I paid the toll in Canadian funds since they were taking it at par. The line to get into the USA was, as usual, lined up more than half way across the bridge. The Canadian side was longer than usual, too, but was only a fraction of what the southbound had to deal with.

The Border Agent, a pleasant young man we have encountered before, asked where we were coming from. I told him we had gotten as far as Solvang, California and he asked if we had gone there and then just turned around a come back. I told him that was pretty much how it was. He smiled and welcomed us home without looking in the trailer. 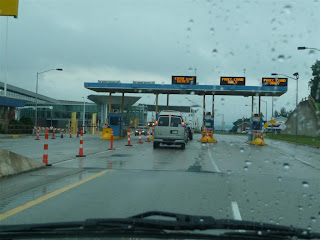 Toll booths on the International Bridge 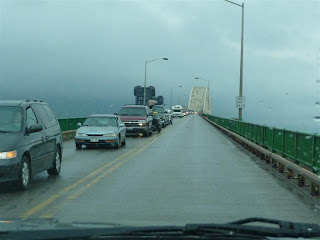 US bound traffic line up 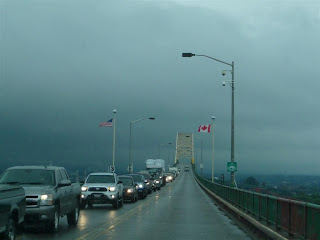 The flags mark the border 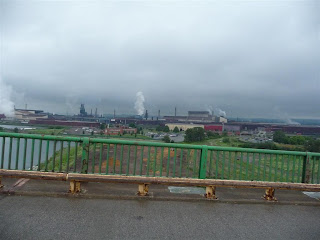 Black clouds to the west 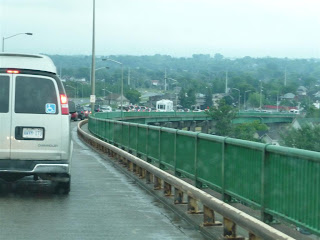 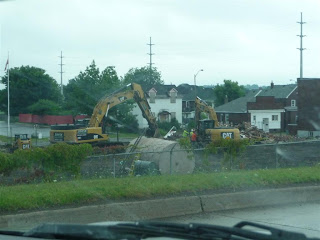 Urban renewal near the bridge 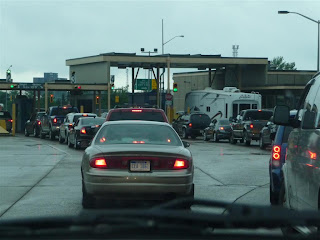 Once on Canadian soil, we took the truck route up to the Second Line and stopped at Last Minute Mama's as we had promised on the way west. Spyder was installing a new shelf on the trailer and told us business had been very good. Melissa, Spyder's wife, was also there with her Avalanche. As we ordered stuffed chicken wings to go, pizza for me and broccoli and cheese for Sandy, the thunder, lightning and rain began. We said goodbye (we'll be seeing both of them at the Freedom Rally in Sudbury next weekend) and hit the road for the last leg of the trip. 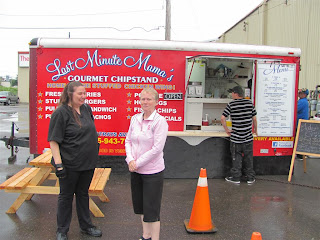 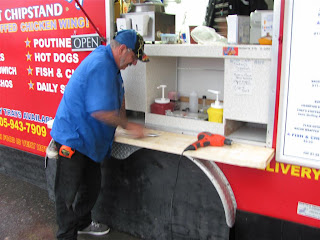 It rained steadily as we headed east but really picked up in intensity between Bruce Mines and Iron Bridge, a stretch of thirty miles. For some of it, I was down to 40 MPH with the four way flashers going due to poor visibility. This was the first real rain we have seen since South Dakota on day two of the trip. As we approached Blind River, the rain eased and then stopped but the winds got gusty. The last ninety miles was pleasantly uneventful. 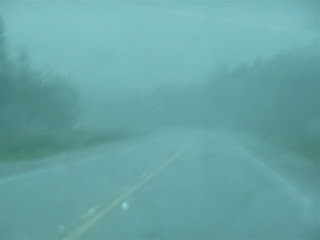 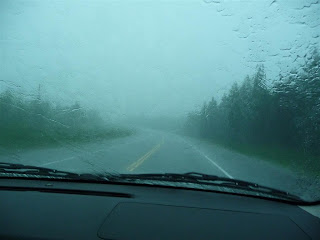 Not so heavy rain

We crossed the Greater Sudbury city limit (only thirty more miles) at 7:40 PM and got to our driveway just before 8:30. Although we were tired, I unloaded the bike, unhooked the trailer and we brought all the bags inside before settling down. 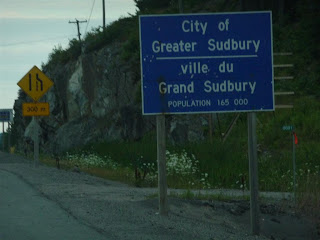 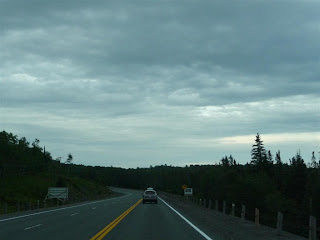 This was a good trip and I will post a summary soon. 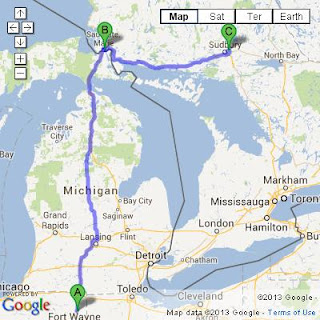