But I bought you seven acres in Paradise……… 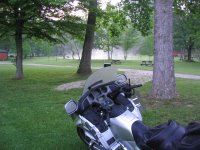 We started the day with blue sky for a change.

First stop was to check out Dolores the duck in the pond on the grounds. She had just hatched her eggs and twelve ducklings were showing their beaks from under her feathers. It didn’t take long for them to find the pond.

One warning. Never park under any tree in NC. You never know when sap is going to start dripping.

Fred made coffee. One batch was Folger’s and the other was Tim’s (received from Stonewall). I blew my reputation as a Canuck by not being able to identify the Canadian brand. Fred then cooked breakfast for everyone. Link sausages, a sausage and potato hash, eggs and toast. Mo gave us each an apple. A great way to start the day. Sherm and I figured out how to dial in using Fred’s Visa phone line and we got some posting done.

When it came time to ride, we pointed the two GoldWings west on Highway 28. We stopped at the Fontana Dam, run by the Tennessee Valley Authority. A retired TVA man in the visitors centre told us that this is the highest dam west of the Rockies. It was build during WW II. The spillway was interesting because excess water flows through two tunnels and then shoots 150 feet in the air before crashing into the river below. 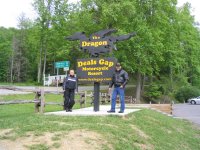 Leaving the dam, we continued west on the very winding road. I actually dragged the foot pegs for the first time and, although we were riding reasonably quickly, a few crotch rockets moving at Warp 9 passed us. It was great to find tat the confidence I regained last year in cornering was still there. We arrived at the resort at Deals Gap amid a crowd of bikes form all over and went inside in search of Kochmann boots. Brad, the owner, is originally from Toronto and gave me some grief, claiming Sudbury wasn’t really in Northern Ontario. His wife Beth told us they had no boots in the style we were looking for but that there was supposed to be a container in transit from Germany. We said we’d check back in three weeks on the next time through. 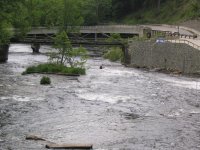 Leaving Robbinsville, at 52 degrees F, we continued south to Highway 74 where we turned left and road through the Nantahala Gorge. This is a National Forest and rafts were everywhere in the river. We stopped at a spot that had takeout points for the rafts, several restaurants and a footbridge over the river. Someone in a kayak was playing in the light whitewater and we met an older couple from Houston. He had hurt his foot and was immersing it in the cold water. It was as good as icing it down, given the temperature.

From there, we continued to Sylva looking for WiFi and a Wal-Mart. Finding WiFi here is about as likely as finding a liquor store in Riyadh. We resigned ourselves to using Fred’s dial-up and visited the Wal-Mart Super Center for some essentials.

We had a little trouble getting out of Sylva since the only ramp out of Sylva onto 74 sent us east. After two tries and a U-turn, we got going the right way. Sherm commented on the CB (which we had been chatting on all day) that we were lucky that we hadn’t gotten any rain. It immediately started sprinkling and I said bad words. The sprinkling sopped soon and we made it back to KSL in good time to find that Kelly Cobb had arrived from Florida. We had, in fact, met here on the road to Sylva but I didn’t recognize her because she has a new bike.

There were also two new non-VROC riders, Steve and Ty, from Maryland and Delaware. Supper was steak with Bearnaise sauce, shrimp, corn on the cob, home made bread, salad and cookies. My plans to lose weight on this trip are slowly going by the wayside, but what Fred and Mo do for their guests is outstanding. Then Sandy and I took some bread and fed the ducks. 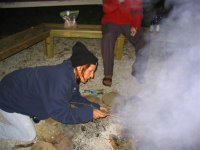 As the sun went down, we started a fire in the pit and everybody sat around telling tales. The wood was a little green so wood smoke was rampant but Lynn from Florida (with Murray the transplanted Canuck) blew on it for a while. Which brings us to the subject line. Mo had just finished telling several stories about how Fred had, from time to time, been inattentive when he replied with “But I bought you seven acres in Paradise”. Mo said people need to look at the “before” pictures of KSL to get a true appreciation of this.

It was a cold night, so we fired the electric heater up in the trailer when we climbed into bed. If we’re lucky, tomorrow will bring more of the same as today.
Posted by Jim "Skid" Robinson on 5/15/2006