This is a sad day.

Everybody in VROC knows who Sherm Acord is. He is the VROC good will ambassador, the picture blogger, everybody's favourite. He has appeared in my Blog many times since I started it last season. Despite the fact that he resides in Coos Bay Oregon, we ride with him several times each year all across the country. 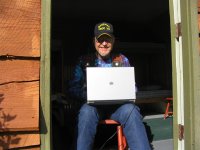 You will recall we spent a couple of days together last week at KSL, riding the roads, eating the food and swapping tales. Sherm always has great tales and takes excellent pictures which he shares with all of us through his Blogs. Here he is at KSL uploading pictures to his laptop so he can post them to his SEVROC Blog via Fred's Visa phone line. The smile you see is typical Sherm.

Sherm has been riding for many years and handled Kokopelli, his 2002 GoldWing, with a master's deft touch. I've followed him many times and admire his smoothness and the effortless way he floats through the corners. 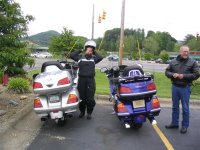 Here are Sandy and Sherm next to the two VROC Wings in Robbinsville NC. You will note that we even have the same licence plates.

Unfortunately, even the best of us aren't immune to trouble. Word was posted on the VROC newsgroup this morning that Sherm, on his way home from North Carolina, had crashed in Oregon about an hour short of his destination. Details started out sketchy but new information has been coming in throughout the day. The cause of the accident is, as yet, unknown. Sherm is in ICU in a hospital out there and his wife Pat is with him. It looks like he has a lacerated spleen, broken ribs, a broken scapula, and injured hand and much road rash. He is in a lot of pain but is stable. Reports are that Kokopelli is a write-off.

Those of us who ride a lot are always aware that this can happen, but it really hits home when one of the masters, one who we just assume is invincible, is down. The Power of VROC is already massing as it does in troubled times, but I ask any of you other readers who can find it in yourself to offer a prayer or a thought for our good friend in his time of trouble.
Posted by Jim "Skid" Robinson on 5/26/2006