So much for the leisurely backroad wandering. It was partly overcast this morning when we tore down and headed for the border crossing at Fort Erie. No problems getting across, as usual, and we jumped on the NY Thruway westbound.

We stopped at the service centre at Angola for breakfast. Talked to some Harley riders headed for Myrtle Beach Bike Week. This would become a common theme for the day, since most southbound bikes were headed there. I called Scruffy in Erie to see if he was up for coffee. 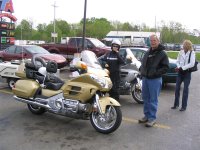 There was a little bit of light rain near the Pennsylvania line but nothing bad. We met Scruffy (aka Tom McCalmont) and Linda at the Truckstop of America and got a look at their new 2006 Wing. Another VROCer gone over to the Tupperware side. You can see the colour is quite striking. Thanks for the coffee, Scruffy.

The run down I-79 to Pittsburgh was uneventful. No flying turkeys. We fueled at Washington, Pa, and phoned CYborg to tell him we'd have to catch him on the next trip. Then called Jim Ayers in Fayetteville WV. He said he was around so we headed on down to the New River Gorge parking lot and called him again. By the time we got out of the rainsuits, he was there on his new (to him) Nomad. 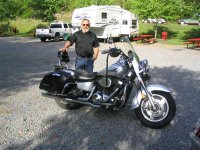 You can see that it is now silver and black, as opposed to the yellow with purple flames it was when EZ owned it. Jim retires in a few weeks and is planning to hit the road.

We got a campsite at The Rivers, the same place we were last year the first day we camped (the day before the drag chute episode). Then we went for supper the the Western Pancake House with Jim. Back at the campground, two couples from Flint Michigan with a fifth wheel shared their bonfire and company with us. They were coming back from golfing in Myrtle Beach and are going to raft the New River Gorge in the morning. A bit of light rain fell, and we got to bed fairly early.
Posted by Jim "Skid" Robinson on 5/13/2006