The overnight rain eased by morning and we loaded the bike up for the long trek to the Canadian border. Thirty miles up the road, we arrived. I was amused to see the toll on the Thousand Islands bridge was $2.00 US or $3.00 Canadian. They are a little behind the times and it made me wonder how many people actually pay in Canadian dollars. It is a beautiful crossing as both bridges are short but high and let you see the very nice homes (I can't call them cottages) along the water. The border crossing went well and, once again, we weren't even asked to show ID. 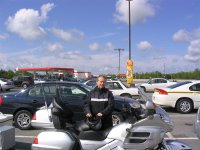 We headed west on the 401 and stopped for gas at a service centre. I took a picture to show the bluest sky we have seen in a week. In Napanee, home of Avril Lavigne, we left the big road and headed north on the two lane Highway 41. It starts with flat farmland and quickly changes to a unique combination of swamps, ponds, rock outcrops and trees. Across Highway 7, the road becomes a series of sweepers. We got off 41 in Denbigh and took back roads to Combermere.

A mile from our destination, I was still moving along at 120 KPH when a large deer made a break for the road. For all of you who have been asking about the Honda ABS brakes, I remain a major fan. I braked hard and was still able to steer to where the deer wasn't. This system works better than advertised, in my opinion. 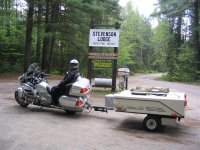 Our arrival at Stevenson's Lodge about noon signaled the end of travel for the weekend. The Fry brothers were already here and people started rolling in as the afternoon progressed. Kim and Heather made it about 4:00 PM.

With Heather's car here, it was time to head the ten miles into Barry's Bay to get provisions. Sandy drove Heather's car and I went ahead on the bike. After the first two twists, I slowed down to wait for Sandy. I could see her in my mirror with a few cars behind her. The a BMW GS passed her and came tearing up behind me so I leaned on it and the two of us clipped through the next few turns and over a hill. As my head cleared the hill at about 120 in an 80, I saw the cruiser on the shoulder facing the same way we were going. By the time the whole bike cleared to crest, I was full on the brakes and the Beemer (ridden by my friend Marc as I found out later) fell in behind at a sedate pace. I watched the mirror and saw the cruiser pull out behind the line of cars following Sandy. I waited for the inevitable as he passed on car, then another. Then, for some unknown reason, the lights came on and he pulled the truck behind Sandy over. Sandy was sweating too since she had left her licence back at the lodge.

Arriving back at the cabin with the food, we stowed it and headed to the main lodge for chili, hot dogs and visiting. There is a contingent here insistent on shaving people's heads. I have no idea where this came from, but I am keeping my hat on for the weekend so I don't get waylaid. Mike and his friends Jay and Kim got in about 10:00 PM. A few partied hearty but Sandy and I adjourned to bed about midnight under raining skies.
Posted by Jim "Skid" Robinson on 5/19/2006