The rain, which had been hitting us for the last 36 hours, let uo just as we were leaving. Got away about noon and the bike purred.

There was a quick coffee stop in Parry Sound where we found the Gremlin Bell was working overtime. I looked down at the left saddlebag and saw a tiny object lying in the gtroove between the bag and the door. It was one of the two screws that holds Sandy's microphone to her helmet. What were the odds that it would land there and that I would see it? The alen key was on the trunk so all was well. 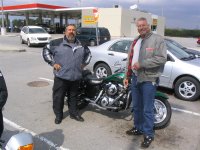 The next stretch took us to the service centre on the 400 just north of Toronto. We met a fellow there with a green '99 Nomad. I asked him how long he had it and he told me about one hour. I told him of JOG's and extenders and gave him the link to the VROC site. This is Neil, the owner, on the right and Gary (or Rob) on the left.

It was Friday rush hour in Hogtown so we jumped up on the expensive 407. There were a couple of slow spots but most of the way to Burlington we were running 120 KPH. We followed the QEW on into Niagara Falls and found the KOA. Guess what? Thanks to the Gremlin Bell, it was free night at the KOA. For a small donation to a local charity, the camping fees were waved. Set up went easy considering it was the first of the year. 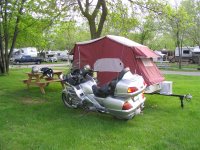 We took a tour down by the Falls. Thet have really changed the parking setup since I was last here so we drove by and didn't stop. Then we ran the winding road up to the Spanish Aerocar and back before returning to Lundy's Lane via Clifton Hill. I do think the the Hill is the nost garish block in North America, bar none.

A quick bite at Denny's and we returned to the campground where I am typing this in the dark.

Tomorrow's route will take us through NY and Pa and into West (By God) Virginia. We'll get off the slab south of Pittsburgh and probably take 19 and 119. Or not. Who knows. More tomorrow.
Posted by Jim "Skid" Robinson on 5/12/2006