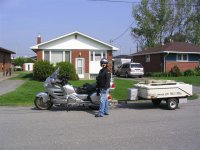 Up early. Packed the last of the items and ran the banking errands. The packing went much easier than last time because everything now has a place. Then the temperature started to rise. They had called for 30C today and it was headed there with the utmost humidity.

We stripped the Alter Ego jackets to mesh and hit the road about 10:15. Traffic was light and we tooled down Highway 69 on autopilot. The south Parry Sound Tim Hortons provided chicken wraps for lunch and then we continued on. 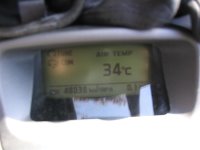 At the service centre at 400 and 89 we found a shady picnic table for a water break. Thirty degrees C my ass. I took this picture of the Wing temperature readout while we were sipping the water. It hit 35 before we got to Cambridge. This is a far cry from the 4C last Monday. Maybe Global Warming is happening since this is July weather in May. I was almost hoping for rain.

At Highway 9, we headed west and the down Airport Road and over to Guelph on 24. After Guelph, the traffic got very stupid. It's a good thing they don't arm drivers here. Especially me.

In Cambridge, we stopped to see Kevin and Maysey Dyne, rider friends we have known for many years. They gave us more water as we caught up. Turns out we might be running into them twice on this trip, Americade and the French Connection Rally.

From there we went to Heather's and helped her get her air conditioner running. Then a quick visit to Kim and Mike to chach their new air to air heat pump. It was cranking out the cold air. Then back to Heather's where I have just finished clipping the toenails on a guinea pig. Tonight I'm going to help here with a critique she needs for work.

Tomorrow should be a back road day after we cross the Peace Bridge. The target is Washington Pennsylvania, which would be a lunch break if we were traveling the superslab.

On another troubling note, I got word when I got to Cambridge that Dave Scott (Scotty) and Marlene, each on their own bikes, had an accident in Front Royal Virginia. Scotty hit a car that pulled out in front of him and Marlene took to the ditch to avoid the wreck. Both are OK, but Dave flew over the car and will be feeling sore for a while. It looks like is bike, a 500 Vulcan, is finished. Luckily, his pride and joy 800 is still at home. They were heading for KSL but now are returning home so we will miss them this time.
Posted by Jim "Skid" Robinson on 5/29/2006