We arose to a cool overcast morning. It seems we are setting record low temperatures here. It hasn’t been this cold on this date since 1973. That notwithstanding, the breakfast of eggs, pancakes and sausage patties was excellent. Sherm and I checked tire pressures and oil and adjusted as necessary. 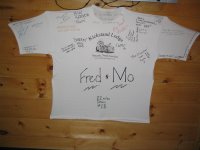 With Kelly joining us, we headed back west on Highway 28 to Deal’s Gap. We stopped at the Resort and found a huge KSL T-shirt that we all signed to say we’d been there. I talked to a Nomad rider about VROC and we got our pictures taken (again) in front of the Dragon sign.

After a bit, it was time to hit the Dragon. For those who don’t know what this is, it’s the eleven-mile stretch of Highway 129 from Deal’s Gap down into Tennessee that boasts 318 turns in 11 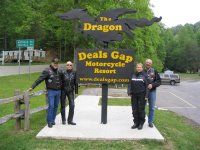 miles. The variety of licence plates at the resort confirms that people come from far and wide to test their skills. It is everything they say it is. We ran through it at a moderate pace. Part way up, we saw what was probably the photographer from killboy.com, the site where they post pictures of almost every bike to come through the Dragon. Kelly managed to wave at the photographer while simultaneously dragging a floorboard. By the end of the run up and back, the little metal balls under the end of my floorboards were half ground away from dragging through the corners. Despite that, it was a relaxed run and I enjoyed it a great deal. 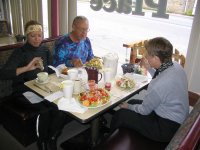 By the time we got back to Deal’s Gap, it was spitting rain so we decided to skip our run over the Cherohala Skyway and proceed directly to Robbinsville. We stopped at the Tallulah Antique store and talked to the proprietor. Sherm was interested in some drawings done of the Lonesome Dove characters since he is a Larry McMurtry fan but he figured $110.00 was a little much to pay. The girl recommended Lynn’s Diner for lunch so we went up there and enjoyed salads and soup.

When we came out of Lynn’s, Sherm noticed his cell phone, usually clipped to the handlebars since he can talk while riding, was missing. He figured someone had stolen it. After checking the trunk and his pockets, he went back inside to see if it was there while Kelly called 411 to get the Sprint number so we could report it stolen. The phone wasn’t in the restaurant but the manager suggested she call the police and have them come and take a report. As we were standing out by the bikes waiting, a little light bulb came on over Sherm’s head and he opened 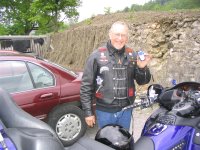 the fairing pocket. Right there, where he put it when the rain started, was the phone. Here’s a picture of Sherm and his phone. After a quick trip inside to cancel the police, we headed back to KSL.

On the way, we stopped and filled up. Sherm took three gallons and we took 3.5. I can’t figure out why, but I’m not amused.

So here we are now at KSL waiting to see who might drop by. As soon as we pulled in, the sky lightened but nobody feels like going out again right now.

Supper will be ribs and there will be some guests from the Maggie Valley crowd. Then we’ll pack some of the stuff in anticipation of an early departure northbound tomorrow.
Late breaking news: Charlie and Annette arrived a short while ago as did Strider. The family is growing.
Posted by Jim "Skid" Robinson on 5/16/2006