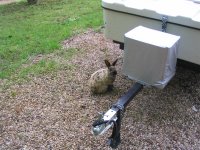 We awoke this morning to a visit by several of the campground's rabbits. I thought for a moment that I would have to call for Brother Maynard and the Holy Hand Grenade of Antioch, but the visitors proved to be peaceful.

The Shenandoah Valley has so many things of interest that we will have to come and spend some time here. As a start, I think we'll spend two nights here on our way from KSL to Americade in a few weeks. Monticello, Richmond, the Skyline Drive , the Luray Caverns and all those Civil War battlefields. We'll see what we can do in a day of sightseeing.

The weather was not bad when we set out. It got better as we moved north but a strange thing happened when we stopped for breakfast in Hagerstown, Maryland. There was a lot of blue sky when we went in but, after no more than 25 minutes, the sky was totally overcast and spitting rain when we came back out. We rode back to clear skies but eveyr time we stopped it caught us.

As we descended into Scranton PA, out of 250 songs on the MP3 player, Chapin started singing 30,000 Pounds of Bananas. That was spooky. In Scranton, I-81 turned directly toward a black rain cloud so we stopped and I suited up. (Sandy had been suited up since we left Staunton.) By the time we got moving again, the clouds had shifted and we went back to our usual practice of running ahead of the weather.

The pattern shifted as we got north of Syracuse NY. We started hitting wet pavement and realized a large storm was moving ahead of us. Near Watertown (2nd Chapin reference), we stopped and had a bite while letting the weather get further ahead. Not far enough, I guess, so we stopped in Watertown and got a room. Shortly after checking in, it started raining. I looked at the Doppler on Weather.com and saw that I-81 from Pennsylvania to here was under one long thin rainstorm. All things being equal, we were very lucky.

It was only a 550 mile day but it felt like 200. I guess we are getting back in the swing of things although I had to stop twice to clear my head because I was getting drowsy. Need to revise the diet or something for more energy. It will be a short hop tomorrow to Combermere.
Posted by Jim "Skid" Robinson on 5/18/2006