Back Roads to Bloomington

After checking tires and oil, we headed south on SR 52 in a fog bank. Scotty led, Marlene went second and we brought up the rear. At the Ohio border, the number changed to SR 109 and the fog continued. There were no curves on this part of the route. As we crossed US 24 at Napoleon Ohio, I recognized the McDonalds as one we stopped at in June headed for Custer. Sad commentary that my landmarks are fast food restaurants, but it's better than no landmarks at all. From Napoleon, we took SR 424 along the Maumee River. This was an interesting route with many twists and curves in it. We went through Independence on our way to Defiance and, for a moment, I thought I might be in Missouri. 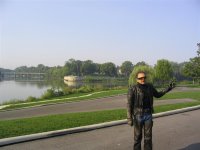 As we neared Defiance, Scotty stopped in a park rife with history. This was where a plaque said Chief Pontiac was born and, across the river, was the site of the post-revolutionary Fort Defiance. Many Indian gatherings were held here and the large stone shown tells of the French Indian Apple Tree, the largest on record with a nine foot diameter.

We continued on US 24 across the Indiana line and then went south on SR 101, across US 224 and 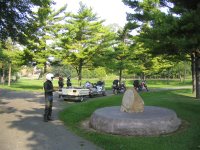 south on US 27 through Berne and Geneva. The Swiss background here was shown by the gingerbread on the McDonalds "Swiss Chalet". We followed SR 67 across to Muncie and then went south on SR 3, stopping for lunch at Bill's Diner in Newcastle. I found in advertising on the menu that there was a local lawyer named David Scott but Scotty was unimpressed. At Rushville, we turned southwest again on SR 44. This was quiet, except for traffic in the towns, until we got to Franklin. The stretch from Franklin to Martinsville was a winding stretch with corners marked at 40, 30, 20 and even 15 MPH. The pavement was perfect and we rolled through with smiles on our faces. The only thing I didn't understand was a series of "Construction Ahead" signs. We never found any construction. At Martinsville, we headed south on SR 37 and then cut off at Bloomington on 46 to Elletsville where our friend Pat "Evil" Shea lives.

Arriving at Pat's, we pulled down into the back yard and found many friends already set up. Earl from Louisiana, Jax from Tennessee, Skeeze from Georgia, Brillo and Deb from Iowa, Mad Mike from Illinois, Bassman from Oklahoma. We set up the camper and then went out with the gang to the Hoosier Grill just down the road for supper. I want to know who put the melon scented hand wash in the men's room. The blow drier, on the other hand, was almost violent. After supper, we returned to the yard, found Piper had rolled in from Kanas and then started a bonfire. Big Dave, Beth and little Zeke arrived late by car from Iowa. Dave's sidecar hasn't been mounted yet but Zeke, nine months old, will be a chair rat soon. Sitting around, we talked about movies, books, music, martial arts and other topics. I found my way to bed about 2:00 AM leaving a few diehards still expounding.
Posted by Jim "Skid" Robinson on 9/07/2006