Finally, We Arrive In Arkansas

We never did get the WiFi in the room working. I hate when that happens. I know we won’t have much opportunity in ES so I’m not sure when this will get posted.

The sky was partly cloudy with mid-60’s and the Doppler showing rain to the west. Rather than spend the morning around Branson, we decided to head for Eureka Springs right away in case the weather moved in. We took the scenic route out of Branson, following SR 165 across Table Rock Dam and through the countryside and then turning in SR 265 to US 65. The twists were somewhat spoiled by a van towing a trailer, but it was still pretty. We followed 65 south a short ways and turned on SR 86, which is a beautiful road to wind our way to the Arkansas border.

Just north of Blue Eye and the state line, SR 13 meets SR 86. The traffic coming off 13 in an odd shaped Y intersection has a stop sign but I guess the driver of the big red dually truck hauling the large piece of equipment on a trailer didn’t notice or he didn’t see us. I didn’t make the best move by stopping when I should have swerved right, but he stopped as well and we glared at each other for a moment. Then I took a deep breath to clear the adrenalin and we moved on. In the middle of the small town of Blue Eye, we entered Arkansas. The road got a little straighter as we moved on down to Berryville where we stopped at McDonalds for the usual. No WiFi at this Mickey D’s either. 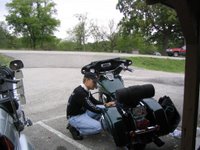 It’s a few miles from Berryville to the Iron Horse Stables where we would be staying. On the way in, we passed Scott “Ride-On” Steen leading a group of Vulcans out on a ride. There were still a number at the IHS when we pulled in. We exchanged greetings with some old friends as we tried to check in. This was a challenge because they kept moving the registration files between the office and the restaurant. For a bit, I felt like the ball in a tennis game. Finally, we got the keys and unloaded our gear in the room. Rainman (pictured here) from Georgia was trying to diagnose an intermittent misfire on his Nomad. The standard VROC advice for this is to first check the battery terminals for a bad connection. His positive terminal was loose so he tightened hit and I then talked him out of doing more messing around with it. The problem was, in fact, solved by the simple fix based on VROC wisdom. 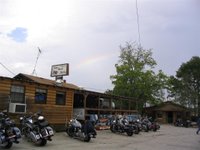 On the way to registration, we saw some old friends and met some new ones. We got our meal tickets and bought some raffle tickets for the large number of donated prizes that Dianna “Moon” Hugely, the organizer, and her team had found. People continued to arrive throughout the afternoon. Supper was slated for 6:00 PM under a large awning next to the IHS. A few of us started loitering near where we figured the food line would start well ahead of time and were, as a result, the first to be served the chicken, pork, beans and other good stuff.

After supper, some of the goodies were raffled off at the back of the IHS. After the prizes were done with (we didn’t win anything but two Honda hat winners gave them to us), we sat around the fire and watched brilliant flashes of heat lightning illuminate the sky. Eventually, we turned in for the night.
Posted by Jim "Skid" Robinson on 9/21/2006