Nashville (No, the other one)

We woke up slowly this morning. I could hear voices talking above us on Evil's rear deck so we eventually got dressed and wandered up to find he had a couple of pots of coffee waiting for us. After enough had arisen and got caffeined, we headed down the road to Wee Willie's restaurant for some breakfast. Willie's uses a wireless system for taking orders, communicating them to the kitchen and handling the bills. Quite efficient because, as the final order was taken, the first food was arriving.

After breakfast, a few returned to Evil's but most of us, led by Jax, headed out for Nashville. Indiana, that is. The weather was sunny and warm. Once we cleared the intersection in Bloomington, the ride was stately and pleasant as we wound through the Indiana hills. Getting parked in Nashville, a major tourist spot, was difficult until we stumpled on a whole unused parking area in the back. Jax said to be back by 1:30 for the return ride. Remember that because it will be important later. Some fellow asked where we were from. Tennessee, Iowa, Michigan, Ontario, Kansas, where do we begin. 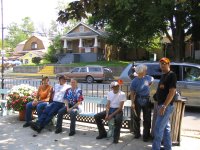 Most of us wandered as a group down the main street. Nashville is strange in that it caters primarily to art galleries and biker shops. We spent some time in the Pit Bull leather shop where Stonewall bought a really flashy jacket two years ago. The one thing I almost got was a sticker for my helmet that said "Damn, I got old fast". Then we sat out for a bit and watched traffic go by. The picture shows Deb, Brillo, Sandy, Scotty, Marlene and Jax. Then we wandered back down the street with Scotty, Marlene, Big Dave, Beth, Zeke, Sandy and I stopping for ice cream. Lots of time before 1:30. After ice cream, we stopped at the gas station on the main drag to use the facilities. It was about 1:20 when I saw Jax lead the rest of the group out of the parking lot and head back towards Bloomington. Talk about abandoned. I found out later it was all Brillo's fault since he told Jax it was OK to go.

Piper was still wandering around at 1:30. I gave Scotty my Indiana state map so he and Marlene could take the scenic way back. Big Dave and Beth opted to wait for Piper, not knowing he had said to go on without him. That left Sandy and I with an interesting run back. I could never have ridden like that in the group. After passing a truck, two bikes and four cars I had an open road and wound into the limited speed corners with gusto. It was a good ride and we beat Jax's crew back to Evil's (they had stopped at a Harley shop). 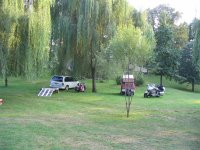 We sat back under the weeping willows and passed the time with Skeeze, Earl and the others as they returned. Earl is rebuilding his house in New Orleans and we have been really interested in the progress. We talked so much that we worried that there would be nothing to talk about around the fire tonight. Before long, the supper bell rang and we adjourned to the deck. Evil and Earl had grilled brats, Italian sausage, hot dogs and hamburgers, complemented by corn, beans and potato salad.

The fire was lit with style and some gas. As we sat around, we drank a toast to comrade Jeff "Kegs" Kegley of Pennsylvania. Kegs has been suffering from esophageal cancer for some time and, after a valiant fight, was near the end. This was according to a phone call from Tommy "Rabbi" Willcockson who had been up to visit him. Kegs is a wonderful guy and has been a driving force in many charitable aspects of our gatherings.

Sandy and I went to bed fairly early tonight.