There was a thunderstorm overnight. The bike was covered with dirt and debris that had run off the roof. This was the first time we hadn’t covered it for the night and that was a mistake.

We got up late. After hooking up with Bob “Magoo” Montgomery from Bullhead City Arizona and Jim “Wrong Turn” Ayers from Fayetteville West Virginia, we set out for breakfast across town at the Smokehouse Restaurant. It was quiet there and we all split two big breakfasts including what is billed as the “World’s Largest Biscuit”. I won’t argue with that. The older lady serving us looked a lot like Doris Roberts the actress and had a wry sense of humour. She had an aunt who lived in Chatham Ontario who she had visited when young. On the way out, I asked for a napkin to clean my glasses but she took them back in the kitchen and washed and polished them for me. Nice place. We then went across the road to the Razorback Gift Shop and browsed their wares.

There was some interest in checking out the Crescent Hotel, the most haunted building west of the Mississippi. I led. I got lost. We wandered around, asked directions and finally got there the back way. We wandered around the lobby and then the others went upstairs and checked out the rooms. There was a binder behind the desk with accounts and photos of ghostly goings on. I do know that most photos taken in the dining room during our banquet last year had “orbs” on them. These are spots of light that look like water spots on the pictures, but they came from many different cameras.

From there, we stopped for ice cream and lemonade to combat the hot, humid weather. Back at the Iron Horse, the TV started broadcasting tornado watches for areas immediately east of us. There was a small but violent storm mid-afternoon. I saw it coming and moved the bike under the overhang in front of the room. They kept expanding the storm warnings all afternoon while we visited on the deck. 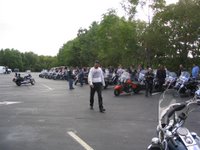 About 5:00 PM we headed over to the Best Western Inn of the Ozarks for supper. We posed in the parking lot for a group photo and then went inside and found seats. I was the MC for the evening and also had the privilege of determining the eating order. As a result, I got to the buffet last but the food was worth the wait. Pork, beef and many vegetables and salads along with one of the best lemon meringue pies I have ever had. After supper, we went outside and watched a large storm build. Black, black with lightning, but the air was still. The Okies and Kansas people looked worried. We went back in and, at 8:00 (9:00 Eastern), the room toasted Kegs memory as did VROCers all across the world. His memorial service in Pennsylvania will be tomorrow. 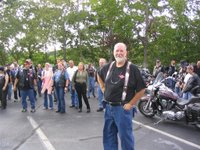 The raffle started and I went outside to watch the storm hit. Rain was heavy and straight line winds were fierce. Pea-sized hail fell for a bit and low-lying fog clouds appeared and swirled while the sky was bright with lightning and thunder booked. Eventually, it quieted down, the rian stopped, and I went inside to watch the rest of the raffle which saw a huge number of prizes given out.

We went out after the raffle and found the rain and lightning were back. I suited up and Sandy caught a ride back to the Stables with Steve “Eagle” Gladfelter and his wife Brenda in there car. Steve and I met in Ignacio Colorado back in 2000 and he has been a mainstay of the World Reunions ever since. The ride across town was one of the worst I have done. Visibility was negligible because the rain soaked up the headlight beam except when the lightning flashed and it was like daytime. Then, when the flash was over, I would try to aim for where I remembered the road to have been. I moved slowly and carefully, eventually pulling into the IHS parking lot and back under the overhang.

The rest of the evening was spent in the TV room watching the Weather Channel as they talked about the “unusual outbreak of September storms”. The sever system started about here and extended all the way past Chicago with a record number of tornadoes spawned and heavy flooding in some areas. Eventually, we went to bed with the sky still lit over and over again by huge flashes of lightning.