It was again (surprise) cool and foggy this morning. They are forecasting clear and a high of 81 here. I chatted with the desk guy while I was checking tires on the bike. He was originally from Oklahoma and spent eight years in Amarillo before moving north. The tires were OK, but I'm not sure about the desk guy.

I find the gas prices interesting. I was paying $2.64 for a gallon of 87 octane in New Hampshire. This morning was $2.80 in New York. Later today, I found it for $2.40 in Pennsylvania. The disparity in state taxes is amazing. But however I slice it, it's about the best I have seen all season so I won't be complaining.

My initial plan was to head towards Binghampton on I-88, get off at Exit 6 and head south to Susquehanna and cut back over to US 11 south, thereby by-passing the city. The only problem with this plan was that, at Exit 6, I could barely see anything in the fog. The idea of taking a minor back road in the pea soup didn't appeal to me, so we continued on I-88 to I-81 South. The fog largely cleared in this stretch and we stopped at the Pennsylvania Welcome Center (a fine new building of Bluestone) for a state map.

We got of I-81 at the next exit, entering the Endless Mountains, and followed US 11 south through New Milford and Hop Bottom. Here there is a spectacular viaduct and, after we turned west on US 6 towards Tunkhannock, there was another one. The fog was with us off and on through this stretch. From Tunkhannock, we turned south on SR 29 and followed Fishing Creek through a pleasant valley. At SR 118, we went west and then took SR 487 South just past a place called Red Rock. It was marked that on the map, and one of the three buildings said Red Rock Store, so that must have been it.

Down SR 487, the Endless Mountains ended. In Benton, we saw the nicest mobile home park I have ever seen. Then we got into Bloomsburg and we found one of the prettiest towns I have ever seen. It has universities, an old historic looking downtown and well maintained everything.

I heard on the radio that it was good we came through when and where we did. It seems Dick Cheney is going to Dallas (west of Scranton) and many of the roads in the area, including I-81, will be shut down by State Police to allow his motorcade to pass securely. It's a fundraising lunch, not a state occasion, and he's only the Vice-President and yet they are shutting down one of the busier truck routes in the country. Glad I got through the area first.

From Bloomsburg, we followed the Susquehanna river to Selinsgrove and on to Harrisburg. Sandy suggested that maybe if we picked up the pace a little, or a lot, we could get to Branson on Wednesday and spend the night before going to Eureka Springs on Thursday. And with that one suggestion, she laid waste to my plans of crossing the eastern US on the blue highways. 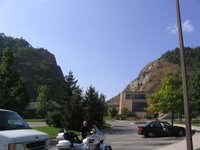 We took I-81 south to Maryland and connected with I-70 West. Stopped for gas at a Pilot truckstop that was the same one we went by in June while camping at Hagerstown. The trucks were still lined up to get in there. When I-70 cut north, we continued on I-68. They call this the National Freeway and promote it as an "alternative route to the west", but the traffic was light and there were almost no trucks. We did get to run up Slideling Hill with the big rock cut at the top (pictured). Down the other side, we could see at least seven layers of hills ahead of us, each one fainter and higher than the one before it. This was evident in the Gaps we went through. The first was 940', the next was 1,100', the next 1,300, the next 1,600. We crossed the Eastern Continental Divide at 2,640 and the next was even higher.

Cumberland is an interesting looking city from the Interstate but it was rush hour and I wasn't getting down to street level. Still, we will have to get back here some time and check out what looks like a richly historical city. At the West Virginia line, we stopped again to check on accomodations ahead in Morgantown. Exit 7 looked good and the lady said the Holiday Inn Express had vacancies so she didn't need to make a reservation for us. That was a mistake because the last room was rented just before we got there. The Super 8 next door had rooms. This place has WiFi, is much nicer than Oneonta and cost me $15 less. Go figure. I asked why Morgantown was so busy and Gloria, the lady on the desk, said she didn't know but it has been like this for a month.

After settling in and logging on, we went over to Bob Evans for a light dinner. Meat loaf for me and a turkey dinner for Sandy were not exactly light. Then we came back to the room where Sandy went to sleep and I have been diligently pounding the keyboard. I need some sleep too since I wasn't in the groove by the end of today. It was subtle, but I could feel I was tired as I ran through the downhill sweepers. My focus was a tad off and the riding was a bit ragged.

A word on the weather. There is a large storm front coming through from the west along a SW/NE line. I am hoping that this gets through overnight so we can get behind it tomorrow. We'll see how this works out.
Posted by Jim "Skid" Robinson on 9/18/2006