It was another grey morning so we put on our rain gear right from the start. Traffic was light as we made our way down to the bridge to the US. This bridge has the worst road surface of any I have found, although there are more patches than holes these days. The lady border guard was pleasant and we even got chatting about the Maine mass murderer who had been a cook at the Sudbury Inn where we would be staying. Quiet border crossings mean bored guards and you can never tell what’s going to happen then. This one worked out well.

Off the bridge, we took SR 37 east through the large Mohawk reserve that spans the border. Gas stations, casinos and cigarette shops line the road for miles. After leaving the reserve, we connected with 122 East through the little town of Constable. This place looked less than affluent, but it also had a sense of honesty about it. Simple folk doing their best to get by.

We reached US 11 and followed it across upstate NY past dairy farms and cornfields to Champlain where we stopped for the usual breakfast. I’m back in the US so McD biscuits are again an option. There was a couple on a Harley headed east who turned out to be from Caledon, Ontario. They were returning from a Maritimes trip and so we talked travels for quite a while before heading our separate ways.

Crossing the north end of Lake Champlain into Vermont at Rouse’s Point, the sun made its first appearance. We eschewed the southbound interstate, instead following Highway 7 south to St. Albans where we stopped and took off the rain gear and sweaters. This, of course, ensured that the clouds would reappear which they did before we left town. The rest of the day was alternating sun and clouds but it never came close to raining. Departing St. Albans didn’t go according to plan. I’m sure the sign for 104 South was missing and, by not making the correct turn, we were committed to I-89 South. I guess I could have turned and gone back up the on ramp the wrong way, but that did not seem prudent at that juncture.

The miscue was a good thing. About ten miles south, we got off and cut over to 104A. This was an entertaining road, winding over to 104 with little traffic. Turning onto 104, we started the diagonal run to St. Johnsbury Vermont, about 40 miles away. The road wound pleasantly through farming valleys, small towns and the tree lined Green Mountains. Eventually, it gave way to SR 15, “The Grand Army of the Republic Highway”. More of the same except that we got behind some slow traffic near the end that we couldn’t pass. The last turn was onto US 2. We saw two Vulcans a few vehicles ahead and moved to catch them. I thought they were Homer and the Montreal crew headed for Bethel so we fell in behind them and followed them around St. J. on the truck by-pass. We separated when I exited to go back to Highway 2 and later I found out it wasn’t Homer anyway when he arrived on a different coloured Nomad.

US 2 was OK. We were now in the White Mountains with the NH “Brake for Moose” signs. Once again, who wouldn’t brake for a moose? The foliage in some places is very much like Algonquin Park. Other places looks more like Northern Ontario. I feel at home here. This was our first time across 104 and 15 and I would recommend the route to anyone looking for a nice ride. 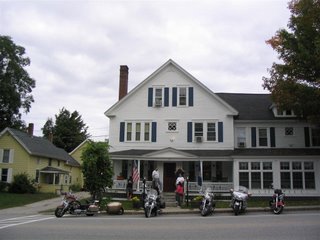 After Gorham NH, we crossed the Maine border and passed through the thriving, if tiny, West Bethel before coming to a stop sign in Bethel. I wasn’t sure if I’d remember where the Sudbury Inn was, but there it was, only a half block up from the stop sign. There, out front, was Ol’ Phart Joe’s Nomad and one wheel trailer along with a few other bikes. People were standing outside or sitting on the porch waiting for the Suds Pub to open at 4:00. We checked in and found our room on the third floor. After the long climb, we found an entrance hallway, bathroom and bedroom with two queen size beds and all kinds of space. It's #21 on the Select Rooms section. Not bad. Dropping the gear, we went back down and socialized until the pub opened. That cleared the VROCers off the street in a hurry. Joe the bartender was on top of nearly everything and Sandy and I split a chicken Caesar wrap and fries along with drinks.

The evening consisted of socializing in the bar or the smoking area (parking lot) as more people arrived. Later, we had a make your own pasta supper, also in the bar. It was good to see all the New England people again, since we missed this run last year. Other than Homer and his wife, we were the only Canucks which surprises me since Bethel is not that far from Southern Ontario. It is only about 255 miles from Cornwall.

After supper, Sandy went up to the room. I spent some time talking to Ron and Lorie Russell and Manjo and Linda and then decided to turn in. Up in the room, Sandy pointed out that the Inn had WiFi, so I dug the computer out. The signal in the room wasn’t good so I went back down to the lobby and logged in. After posting a Blog, checking the mail, getting the newsgroup posts, checking the NASCAR pool for Steve Cifra and looking at stock quotes for Ol’ Phart, I was just about to turn in when the desk got a phone call asking for VROC. I was the only VROCer still downstairs, so I took it. Joliet Jake, who posted earlier that he couldn’t make it due to work, was calling from a bar in Conway New Hampshire to rib Ol’ Phart about it being bedtime. He was amazed to learn that Joe was already in his room.

After hanging up with Jake, I did go upstairs and climbed into bed for the night.
Posted by Jim "Skid" Robinson on 9/15/2006