The 27th Annual Cyclefest, hosted by the Waterloo Wings in West Montrose (near Elmira) Ontario is in the record books. Sandy and I have only missed one of these (2000 when I went to V2K in Colorado and she was helping the kids move into residence). It wasn't the wettest on record (that was 1988) but it was still pretty wet.

Sandy, Heather and I headed over to the campground Friday morning. I rode towing the trailer and Sandy went with Heather in her car. Our old rally friend, Fred Poyser, already had his large house trailer situated so we selected a spot next to him. Fred is 77 and is still fitter than many people I know who are 40 years younger. He manages to fit a GL-1800 Wing into the kitchen area of the trailer. Watching him load and unload is amazing. 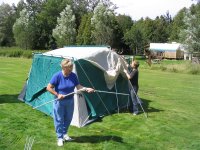 Since Kim and Mike wouldn't be out until after work, we had their tent as well. Heather's 7 x 7 went up first. Easy enough since this is the one I used on the road for a number of years. Kim and Mike have a 9 x 9 Woods EZ Tent. This one virtually sets itself up. Once, that is, you figure out how it is supposed to work. Then we tackled the dining screen. This gets set up once a year and it went better this time when we ignored the instructions and tried a different method. Lastly, our camper trailer went up. Then we helped our long time friend, Maggie McLeod, set up her outfit (see picture). It was a little more complicated than the others, but thanks to her having numbered the poles, we were successful.

Sandy, Heather and I went to the Crossroads Restaurant in Elmira for a light, late lunch. That was until we encountered the lunch buffet. So much for light. Later, when Kim and Mike showed up, we and Maggie went to The Gorge restauarant in Elora for a light supper. Light. Yeah, right. But the food there is very good. We spent the evening around the bonfire as WWW members cooked hot dogs and boiled peaches and cream corn for the masses. Sandy and I turned in before midnight.

Saturday morning was grey and overcast. People started heading out on the poker/observation run in rain suits, and the liquid sunshine started falling on the camground at precisely 10:38. We mingled and visited and then took Kim and Mike with us to the Crossroads for another lunch buffet. The rain continued falling, usually lightly but sometimes with more authority as occasional wind gusts tugged at the tents. Sandy and I took a nap for a while and then we visited some more. My son-in-law Mike learned that I could play euchre when Ray Albert (a Freedom Rider from Sudbury) and I trashed he and Maggie 5 games to 2. They actually played better than the score shows, but I'll never tell him that. Then we had some hot dogs, again cooked by the club, and some of us had some more of the delicious corn. Since the rain never let up, there was no fire and most of us turned in early. 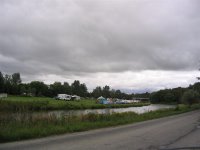 Sunday morning wasn't raining. It was, however, grey and overcast. We had breakfast at the site and then I took a little ride out and around. Not far, just enough to scuff the tires a bit. I did get this picture of the rally site looking across the Grand River. For lunch, a vendor had a hot dog wagon at the site. They were excellent. After lunch, the field events were held between showers. Weiner bite, slow race, ring toss, etc. The riders and the spectators all had fun. I went for another ride out to Maryhill and was back in plenty of time for supper. The caterers did a fine job with turkey, stuffing, ribs, potatoes, veggies, etc. There was a choice of carrot cake or Black Forest cake for dessert. Due to a fluke, I had both. The awards ceremony after the meal saw attendance pins handed out and plaques for the events. Terry Appleby of Sudbury and his daughter Amber won the Observation Run again. This is becoming a habit. The skies cleared for the bonfire and three singing guitar players arranged for by the Wings entertained us. They were very good. After the shut down at 11:30, some of us stayed up for a while but I was in bed not long after midnight.

It was misting again this morning as we broke camp and folded up wet tents. After goodbyes to everyone, we took the tents and other wet gear to Kim and Mike's where we hung them from rafters in the basement to dry. Then we came home, watched a few DVD's and hit the hay.