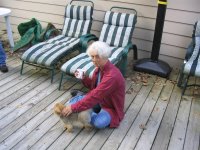 We were up about 7:30 this morning and made straight for the coffee on the deck. We found Marlene visiting with Evil's attack Pomeranian, Annie. I usually don't like small dogs but this one is an exception. Scotty and Marlene had decided to go home a day early to see if there was any sign of Sam the cat, and left shortly after everyone was up, amid a flurry of hugs and goodbyes.

We went back over to Wee Willie's again for breakfast and got the same girl serving us. I took the computer since they advertised WiFI, but I couldn't find the proper access point. Sandy had a good idea and suggested that we get a motel room for tonight so we wouldn't have to tear down wet in the morning. I wasn't for it at first, but the idea grew on me and, after breakfast, we wandered over to the same Super 8 in Bloomigton that we stayed at two years ago and got a room. Surprisingly, the room was ready and they let us into it right away. The TV showed the Shuttle launch at six minutes and counting so we settled in and watched them light it off. I also used the WiFi to download Emails and the newsgroup. 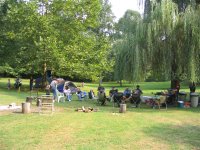 When we got back to Evil's, some were heading out for a scenic tour. We declined and moved our chairs into the shade to pass the time. Evil put some leftover brats, sausages and hot dogs on the grill for lunch and we finished the potato salad. Then we packed the trailer a little differently so that the folding aluminum table would be more accessible since it was needed first after setup. I decided I didn't like the tongue weight so we opened it and repacked it with some heavy stuff at the back. This resulted in a more reasonable load on the hitch.

As the scenic tourers came back, Snake and KT showed up. Although they live nearby, Snake had dry sockets from two wisdom tooth extractions and KT had broken her leg and was on crutches. Despite this, they were their usual cheerful selves.

It was about now that Evil and Skeeze came out to say that they had received a call that Kegs had passed on. It was a relief to know that his suffering was over, but we will certainly miss him. For those who didn't know him, a look at the VROC memorial page will let you see a glimpse of a fine individual. Ride on, Brother Kegs. 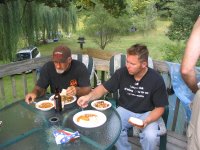 Supper was interesting. Earl spent all day preparing gumbo and alligator. The gumbo was interesting. As Earl said, it wasn't hot. My mouth didn't burn with the spices and my stomach didn't react. All the same, about half way through my bowl of gumbo and rice, I broke out in a massive sweat. So did others. I never had this happen before. Then I tackled a bowl of alligator which really does taste like chicken. After the fine meal was all over (thanks Earl), we adjourned to the fire.

Around the fire, we remembered Kegs. Then, on a happier note, they brought out a birthday cake for Evil's wife Bobbie, Patricia Reed (Mrs. Batman) and I. Patricia and I blew out the candles and everone got a piece.

After saying many goodbyes and thanking Evil for an excellent weekend, Sandy and I headed for the motel shortly after the cake. I was going to Blog but ended up working with tech support trying to connect. Finally, after going over all my computer settings, the guy reset the gateway and I connected right away. That lasted three minutes and I was disconnected again so I gave up and went to bed.
Posted by Jim "Skid" Robinson on 9/09/2006