It is Sunday morning and we have until next Thursday to get to Eureka Springs Arkansas. This should allow us the opportunity to explore some back roads. The only problem I have found with this is that I can find the fastest or shortest way in a few seconds. Finding the right back roads can be a long a confusing process. I work on it one day at a time and hope that, at the end of the day, I am closer to my destination than I was in the morning.

Since we were in no rush, we packed and then I wandered outside for a smoke. The weather was a bit cooler and foggier than yesterday, but held the promise of great improvement. After talking to Ron Russell for a bit, we all went inside for breakfast. We again sat with Manjo and Linda, but today we had "real" breakfasts. Eggs, bacon, toast, home fries. Lots of it, and very good too. After breakfast, we brought the gear down and loaded the bike. People were heading out in ones, twos and threes so there were a lot of goodbyes said. Then it was our turn to hit the road. It was 10:00 AM. 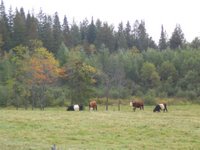 We fueled up and headed west on US 2 through Gorham NH to the little town of Jefferson. There we turned south on SR 116 towards Littleton. This was a new road for us. At one point, I had to turn around a go back to photograph some cows. You can see by the picture that two of them are black and white, but the pattern is unusual. It looks like they are wearing a white cummerbund. Sandy says she has seen cows like this before. If anybody knows what they are, please drop me a line. In Littleton, voted as having the Best Main Street in the USA (I have no idea who voted, but it is a very nice main street) we took US 302 to Woodville and over the bridge into Vermont. Then we ran down the west side of the Connecticut River. This was the reverse of the route we took from Americade to Laconia in June. It was nice to see that the river level, which was over the banks then, was back to more normal levels. I have noted before that Vermont drivers are very polite. I should also mention that they are quite slow. We had to pass more than a few of them to keep up a reasonable pace.

At White River Junction, we turned west on US 4 stopping at the visitor centre at the Queechee Gorge. I put the bike on the centre stand to check the rear shock, which didn't seem to be damping as well as I would like. I found that there is no way you can even see the rear shock on a GL-1800, so further inspection will have to wait until sometime it can get to the dealer. From there, we went on through Rutland where we stopped beside a rider on an ST-1300. He asked where we were going and I said Arkansas. I asked him the same question and he said he hadn't decided. I like that. He took US 7 out of Rutland while we stayed on US 4 to New York State. 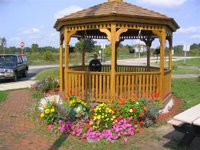 Near the state line, we stopped at a very nice Vermont information place with some nice flowers, shown here. Unfortunately, we didn't need Vermont information since we were leaving. Across the line, we arrived in Fort Ann, New York. Sandy noted that some signs billed it as Fort AnnE, so there must be a difference of opinion somewhere. In any case, a little research shows that the Stars and Stripes were claimed to be first flown in battle here on July 8, 1777. We turned right on SR 149 towards Lake George, a familiar road. Lake George was very quiet compared to Americade week. We went through town and took 9N South (I have never figured out the naming rationale) through Lake Luzerne. In Greenfield Center, I had to ask for directions because the map atlas did not name the road I wanted. Just south of town, after passing under a railway overpass, we turned right on Middle Grove Road, aka Saratoga County 21. Anybody at Americade should consider riding this because the south end, towards 118, is excellent. Twists, turns, reduced speed corners, pretty trees.

When CR 21 reached 118, we again turned west heading for Johnstown. This is not the one made famous by the flood. We didn't see anywhere to stay, so we headed south on 30A to Fonda at the NY Thruway. There were a couple of places, but nothing we considered suitable, so we continued on 30A South to I-88. This was another new road and was another great ride. At I-88 there was nothing either, so we jumped on the big road headed west towards Binghampton. We came to Oneonta, where we have eaten and gassed up earlier in the season, and stopped at the Super 8. This was not our favourite Super 8 since it didn't have WiFi and a few amenities were not up to standard, but it was 6:30, the sun was going down and it was there.

We tucked the bike in and went over to the Denny's next door for a light bite to eat. After we got back, Sandy went to sleep almost right away while I made notes and looked for some roads for tomorrow.
Posted by Jim "Skid" Robinson on 9/17/2006