We left Cambridge about 9:00 AM under mixed skies. The ride down the 401 to London, surrounded by Michigan bound garbage trucks from Toronto, was uneventful. When we got to London, the entire Wellington Road exit (the main route into downtown London) was closed due to construction but Wellington was still accessible via Exeter Road. We followed my memory to cousin Dawn's house.

Dawn is actually my mother's cousin. Their mothers were sisters so I guess that makes her my first couisin once removed. She invited us in and put the coffee on. We talked about some of the goings on over the summer. Dawn and her husband Earl had celebrated their 50th wedding anniversary over the Civic Holiday weekend. Before long, John Grandmont showed up carrying his own cup of Timmie's coffee. Not surprising since his son Adam works in the Tim Horton's empire, managing a district of 42 stores in Rhode Island and Connecticut. This may be the way we take over the world. John and I were in the Bawating High School Concert Band together. In his case, the music took since it became his profession and his children are musically gifted. Who would have known back when he was known as Hawkeye or Charles Ulmer Farley and played the tuba. We told stories and compared notes on a variety of things until it was time to leave. 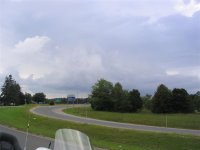 Outside, as noon approached, a large black cloud was threatening. We made tracks for the 402 west to Sarnia and got clear of it, just skirting another one in the process. You can see a troubled sky in the photo. After a brief stop in the pleasant town of Strathroy to get some tent seam sealer (the trailer wasn't totally watertight during the weekend rain), we made it to Sarnia and crossed the bridge with very little traffic. On the US side, the border guards were on a heightened state of alert. We could see them opening trunks and climbing in vehicles. When it was our turn, the guard asked if I would open the bike trunk. We climbed off and I did. Satisfied, he told us we could go and noted that "DAD" should get back on the bike first. This made Sandy's day, or possibly week. This was the place where the guard asked if Sandy was my DAUGHTER back in July. Once again, (four times out of six), we weren't asked for any ID.

My plan was to avoid Detroit by going across I-69 and taking US 23 south. Showing once again that I better hurry up and get that GPS, I missed the I-69 exit in a flurry of road construction and found that we were headed down I-94 direct to Detroit. By the time I figured this out, it was further than I wanted to go back so I resigned myself to a tour through Motor City. On the way, I saw a sign for I-696 to Lansing. Knowing that Lansing was west of US 23, I figured this might work and made the ramp. This took us by Royal Oak, Southfield and Farmington Hills, some of the better appointed communities in the area. Eventually, we reached US 23 and turned south towards Ann Arbor where we stopped for a quick bite to eat. It was a little busy as the university seemed to be getting out and they had lane closures in town due to line painting, but it seemed like a nice place. South of Ann Arbor, we took SR 12 west and SR 52 south to Adrian, where I found Scotty and Marlene's place by luck.

Marlene was still at work, but Scotty was home. He told us that one of their four cats, Sam, hadn't come back from his outing the night before and they were very worried. He was a very timid cat and this wasn't usual behaviour.

During the evening, I got on-line via Scotty's router, updated the newsgroup and checked my mail. We talked politics and VROC for awhile and then turned in without any sign of Sam.
Posted by Jim "Skid" Robinson on 9/06/2006