A Slow Day At ES

It was still raining and booming when we woke up in the morning. The Weather Channel told us that the tornado watches were still up in many places and that many places from Arkansas to Chicago were flooded. The weather caused the memorial service to be cancelled.

We had breakfast with some old friends maintaining a tradition that goes back a ways. The original plan was to go to the Sheridan Buffet, but we decided that we would stay dry and ended up in the TV room at the Iron Horse. 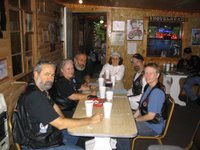 Luck Al, Dark, Wrong Turn, Brenda, Eagle, Sandy
I decided after breakfast that I would make some good use of my time so I took a corner table in the TV room and wrote Blogs in MS Words for later posting and sorted a large stack of receipts that I've been stuffing in a baggie for several weeks. I updated the gas records for the bike as well. There were some serious discussions going on, while looking at the forecasts, of options for those heading home on Sunday. Our route looks pretty good. By the time I got done. the sky was (finally) starting to clear and the sun was making an appearance. 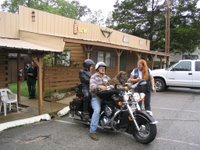 You see the strangest things at ES:-)

Many of the people took advantage of the improved weather to go out riding. Since we were leaving early, I checked the bike over and we packed much of our gear. Then we went over to WalMart for some single serving packages of coffee that we can't get in Canada. Bought two boxes. We returned and hung out with those who were not riding.

Eagle invited us to supper. He, Brenda, Dark, Sandy and I went into town to the Forest Hills Restaurant. This is the third time Sandy and I have been there over the years, but this time we just had the soup and salad bar since we will be riding hard tomorrow. When we got back to the Stables, a live band Phil (IHS Owner among other things) had hired was playing. They were loud enough to interfere with conversations and some people were wearing earplugs.

I talked to Strider (Hickory NC) and Gary VanDerEyck (Listowel Ontario) for a while and then The Saint introduced himself and we spent some time chatting. Before long, I decided to go to bed since we would be up early. I made the rounds of those still up and said my goodbyes and toddled off to bed.

This has been a great weekend despite the weather. Maybe the weather was a plus for us because we'll talk about it for a long time. Thanks to Dianna, Tip and all those who pitched in to organize and execute this event.