We were up at 6:00 AM and I took the time to write up yesterday’s Blog. Sandy got a picture of me typing in bed naked, but after the ongoing thong jokes I decided not to publish it. I must be getting old or something.

Breakfast service started at 7:00. We joined Manjo and Linda and got a cup of coffee while we checked the menu. Inn guests get a choice of anything on the menu included in their rate. Rather than go for an omelet or other usual fare, both Sandy and I opted for the granola, yogurt, fruit and muffin combo. I looked longingly at the sausages, ham and hotcakes but the road to my winter weight loss has to start somewhere.

After breakfast, we got our riding gear and dried the dew off the bike. The weather was clear and warming, much better than we had any right to expect at this time of year. Departure time for the day’s ride was 9:00 AM from the Irving gas station on the outskirts of town. We got there about 8:30, fueled up and hung out until just before 9:00 when Keith Kohler, planner and leader of the ride called the riders of the thirty plus assembled bikes together for a riders’ meeting. 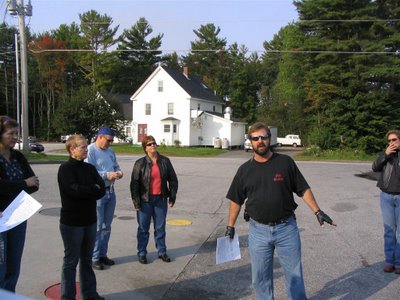 Keith gives the riding orders to the group 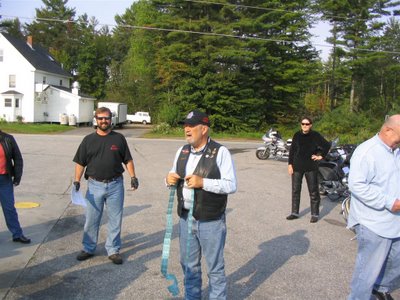 Ol’ Phart gives out tickets for a draw

We left sharply at 9:00. The ride was the usual staggered, using the block and fall back method at intersections. The riders right behind the leader block the intersection while the group rides through and then fall in at the back just ahead of Ol’ Phart who, as sweeper, rides last to be sure no one gets lost. This is the usual NEVROC riding protocol and works very well almost all of the time.

The back roads in Maine are fun. Everybody rode well, which is typical for VROC groups. We passed through areas where the maples were turning bright red and some oak leaves have already fallen. As with yesterday, we found that Maine looks very much like different parts of Ontario. We stopped after 30 miles and sixty miles for brief rests, and then Keith took us to an overlook called Blueberry Hill where we admired the vista and Ron Russell took a timer tripod group shot. Then a pretty blonde girl who was having a picnic there took another two shots with Ron’s camera just to be sure. 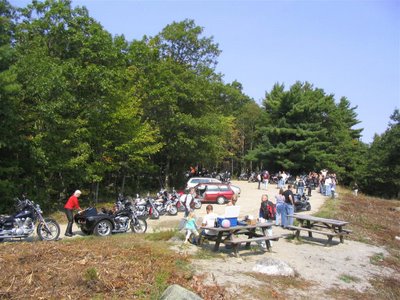 Maine has many good roads and many pretty roads where the pavement isn’t quite as good as we would like. After one turn, Ron pulled his BMW K1200 over suddenly because one of the breakaway mirrors had broken away after hitting a bump. Luckily, he has a tether on it so it wasn’t lost or run over. I stopped with him as did Joe and then we got a little bit faster riding trying to catch the group.

We stopped for lunch in Norridgewock. Our bike had just turned 80,000 kilometers and I guess that is the life of a low beam bulb on a Wing because, as I pulled up in front of the restaurant window, I saw one was burnt out. I’ll have to see about fixing that on Monday. Sandy was concerned about the rear shock since the ride was rougher than usual, but so was the road. I think we are OK, but I intend to replace it with a heavier duty aftermarket unit over the winter.

The ride back to Bethel was smoother and quicker since the roads were wider and newer. We connected with Highway 2 and had a good run. The one problem with the blocking came at Rumford, where Keith called for a blocker (it was my turn) but didn’t wait for three oncoming cars to clear the intersection before he turned. I moved to block, looked at an old, beat-up car coming my way at speed and not slowing down, and pulled out of the way. From the look of the redneck types in the car, I don’t think they would have stopped.

We got back to the Inn with no further problems and people parked and then visited until the pub opened once again at 4:00 PM. We are now waiting for our supper seatings in the dining room and I am killing time by Blogging.