It was clear and 43F when we got up early in Auburn Indiana. The fog rolled in as soon as the sun started to rise. We checked the Weather Channel. I notice that many of us fixate on this channel when travelling, but I guess that is reasonable considering our exposure to the elements. Anyway, showers were forecast in the Michigan Upper Peninsula for the afternoon, but it looked like they would be affecting the Canadian side of Georgian Bay as well.

We put on some rain gear and headed north on I-69. Once again, I am amazed at how many will drive in a fog bank with no lights on. It seems that common sense still isn't that common. The fog broke before we got to Michigan. In Lansing, we turned north on US 129 and stopped in St. John for breakfast. We had a nice talk with a retired gentleman on a Honda 250 scooter. His girlfriend won't let him get anything bigger, but he was happy getting about 70 MPG.

We continued on at an indicated 130 KPH on the freeways. We connected with I-75 and, very shortly after, it started to spit on us. We were in and out of several fast moving rain systems with heavy winds gusting out of the west. When we reached the Mackinac Bridge, severe wind warnings were posted. We could see nasty rain clouds over the north side but, gritting my teeth, we started up. For once the paved outside lanes were open. A rider on an FJR Yamaha who passed us before the bridge was having a worse time than we were, and we went by him noting his white knuckled grip. By the time we got to the other side, he was nowhere to be seen and the rain had moved to the east.

The fifty miles to the Soo was going well until, just before the M 28 interchange, I could see a dark cloud moving in from the west. For a while, I thought I could beat it to the bridge but I should have stopped at 28 and let it go by. As the vectors resolved themselves, it became a race to the last Rest Area. We lost by about 1/4 mile, and got hit by hard rain and severe straight line winds before getting under cover. In the brief time it took us to get into the Rest Area, the worst had gone through so we just kept on going and, by the time we got to the bridge, it was all past.

From the International Bridge, we could see the fall foliage on the hills, some of the windmills out on Lake Superior, and the cruise ship Columbus docked at the Soo Ontario waterfront. This ship, loaded with mostly German tourists, was cruising the Great Lakes as I later found out. There was virtually no line-up and the border guy passed us through quickly, again without asking for ID. I would have liked to stop and visit Mom but it was 3:30 and the clouds were still looking pretty intense to the east so we ran for it.

After negotiating rugged road construction leaving the Soo, the run to Sudbury was pretty much uneventful with us running between and around rain systems. On the four lane near Sudbury, something made a move from the bushes in the median and I checked up as a large wolf crossed unhurriedly in front of us. He gave me a look as he went by, wondering I guess what I was doing heading towards him. I hate it when Mother Nature surprises me, but he was a beautiful looking animal.

As we took the by-pass around Sudbury, I could see another ugly looking system moving to meet us. This time, we made it home and got the bike into the garage thirty seconds before the rain hit. We were graced shortly afterwards with what was probably the most perfect double rainbow I have ever seen. 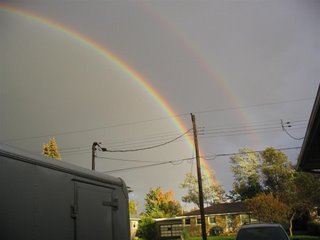 Thus endeth the second last trip of the season.
Posted by Jim "Skid" Robinson on 9/25/2006