It was quite foggy in Boone when we got up but there was no precipitation forecast until afternoon. We had breakfast at the hotel and spent some time talking to the Soucys and the Kilgours. They are nice folks and I hope their vacation went well. 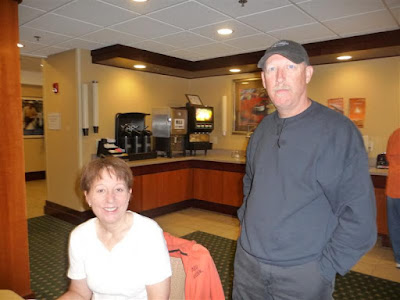 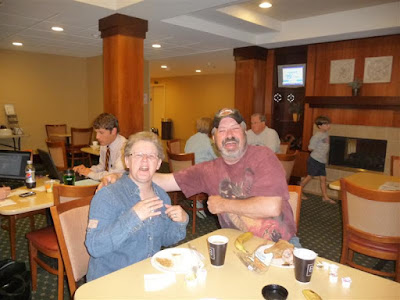 The Kilgours
The fog started to break and we continued on the detour until it took us back up onto the BRP. Other than some slow Harleys at the Viaduct, we didn't encounter anyone going our way for a while. Eventually, though, we caught up to a short line following a car with the licence plates of a retired US Navy officer. He was tooling along at about 25 MPH in a 45 zone. Right behind him was the red Wing from Ottawa. 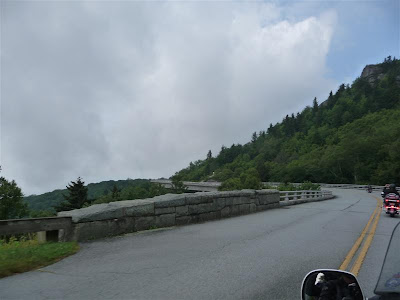 Slow bikes on the Viaduct 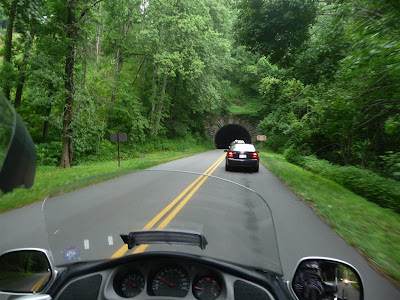 Slow line into a tunnel 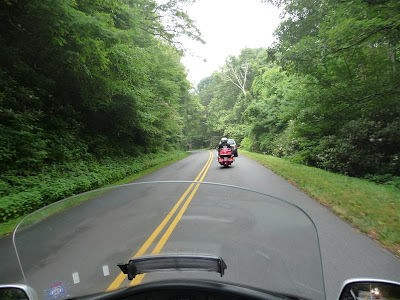 The Ottawa wing following the slow sailor
When the retired Navy man finally pulled over, the Ottawa wing picked up the pace to a brisk 35. I could see he was about at his limit in the corners and showed no sign of waving us by so, as soon as I had a corner I could see through, I passed him. I then radioed back that the road was clear and the others followed. They said he didn't seem pleased to be passed. Lead, follow or get out of the way is my motto up here.

Further on, we encountered some more fog for a ways. I lead carefully, again with the flashers on. 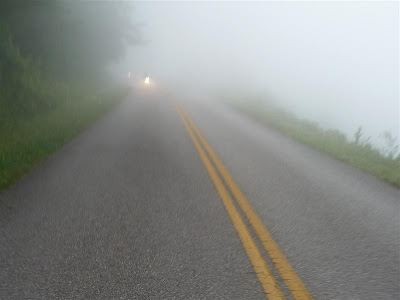 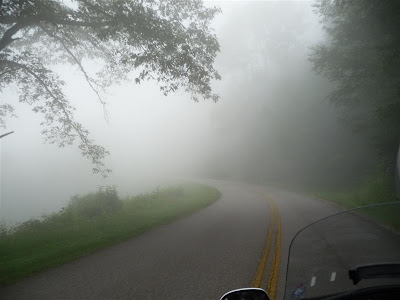 Fog on the Parkway
Our trip up to the summit of Mount Mitchell, the highest point in the US east of the Mississippi was by accident. I got a call to watch for bathrooms and saw a sign indicating there were some up the road on the right. After a climb up a winding road, we found them at the State Park ranger station. By then, we were only two miles from the summit so on up we went. It was cloudy but not raining at the top. 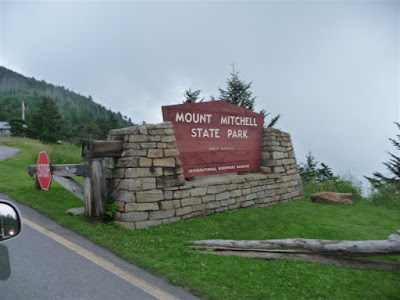 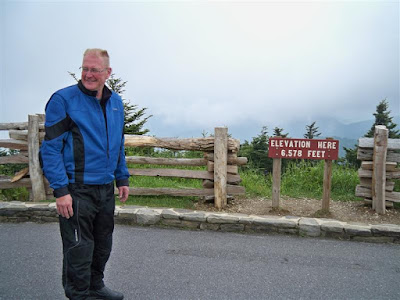 Ron at the summit parking lot 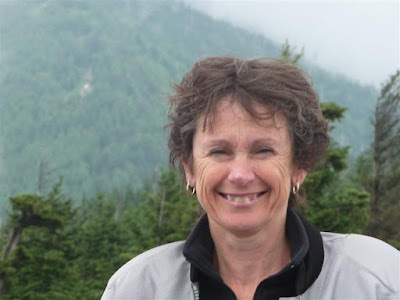 Judy on top of the world
We met a couple from Montreal riding BMW's at the summit. Then we went back down a little ways to the restaurant for lunch. We met the Ottawa wing rider but he didn't seem happy to see us. He'll learn. After we ate, Ron fixed the angle on his rear brake pedal while I tightened his loose cruising peg. 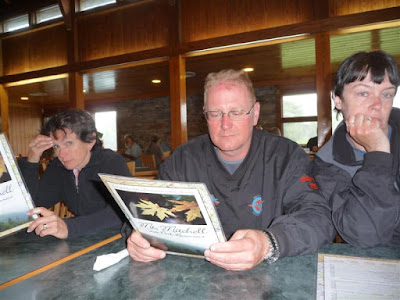 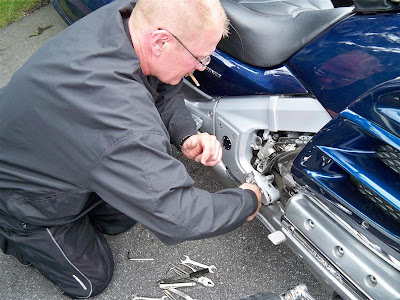 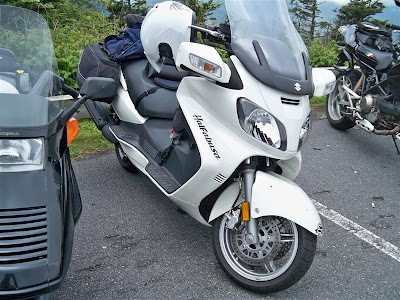 I took this photo for Sherm
We continued on down the Parkway passing by Asheville. Near the highest point on the BRP, Sandy got stung on the cheek by something. At the highest point marker, we stopped and Ron dug out some steroid cream and ice from his cooler for her face. While there, we met the Montreal couple again. 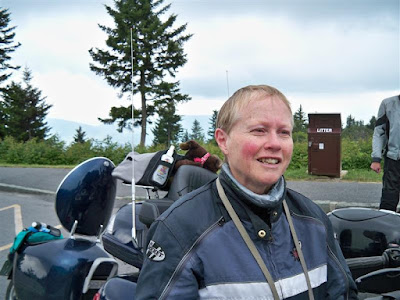 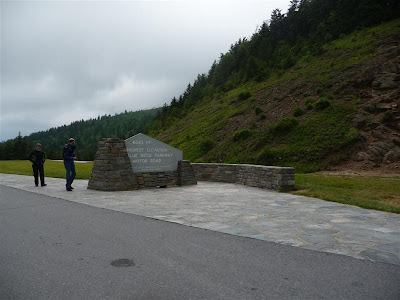 Highest point on the Blue Ridge Parkway
We ran on down to the lower levels while the skies got more threatening. We also encountered more traffic which slowed us down. 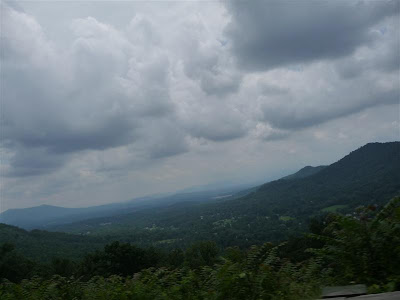 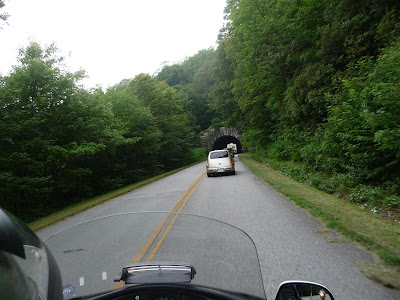 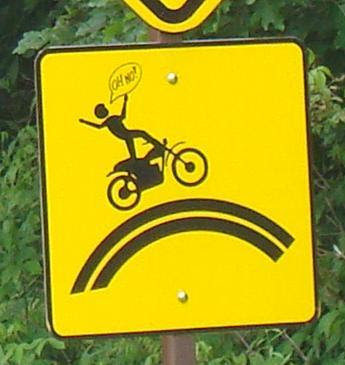 Sign warning motorcyclists of curve
We arrived at the Applecover Inn in Maggie Valley in rain but it soon stopped and the pavement started to dry. We unloaded and then went over to the Garlic Knot pizza place across the street. Then it was back to the motel where Derek, the owner, had a fire going outside. We sat and we talked about many things including local Maggie Valley politics with a lady former councilor. I was the last one in our group to hit the room and that was about 11:00. 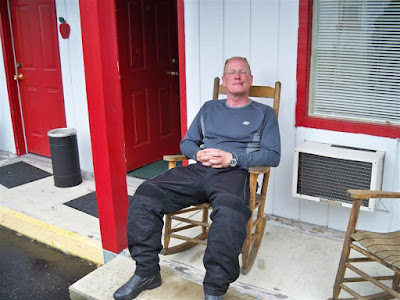