It was grey out this morning, but the radar only showed patchy rain in a few spots. I checked out of the hotel and rode out of town on Hwy 43 towards Merrickville and then along the north side of the Rideau Canal on County 2. Not far from town, I passed an osprey nest on a pole right beside the road. There was a parent there and some small heads sticking out from the huge collection of sticks.
To get to the other side of the canal, I turned on the Andrewsville Main Street and crossed a single lane bridge. I now know where main street is but Andrewsville was nowhere to be seen. This is unusual country. Just down the road on the south side of the canal, I came to Paul's old stone house with his GL-1800 out front. He tells me the house dates from about 1830 and he can't make modifications without approval from some historical agency. 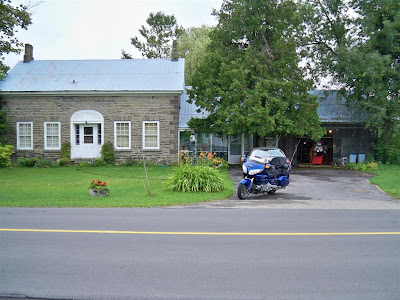 Paul's Old Stone House & Shop
We put the bike up on the lift and Paul started to pull the front end apart. He did one fork at a time and I got to watch while we talked bikes and politics. I probably shouldn't have distracted him because he had to redo the seal on the first fork when he forgot to put the bushing in and then forgot to check the oil level. The second fork went better except that the screw holding the cartridge in place didn't want to let go. An impact driver did the trick. The mis-steps didn't add to the cost since the job is done at a flat rate. 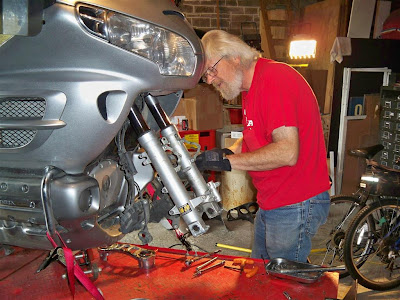 Paul dismantles the front end
Paul gave me one decision to make. When Traxxion installs the front end, the stiffer springs raise the front of the bike and they lower the forks 10mm in the triple clamps to compensate. Paul said he found that keeping them flush improved the handling for him, so I let him set them that way. He said he would reset them gratis if I didn't like them.
I left Paul's at 1:30 PM and rode up Upper Dwyer Hill Road to Arnprior. I knew I was heading into a front with some bad weather, so I had suited up, but wasn't ready for just how bad it was. As I turned towards Highway 29 right at the 417 access in Arnprior, I could see cars on 29 kicking up rooster tails and a wall of water coming towards me. On to 29 and 417, cars were pulling off the road but I figured that it was safer to keep going. The rain didn't last long and, just as quickly as it hit me, it was gone.
I stopped in Renfrew for gas and the slowest Tim Horton's sandwich I have had in a while. I took off my rain jacket but kept the pants and totes on. From Renfrew, I ended up in a huge line of traffic traveling at 75 KPH. I could see two large black clouds, one on each side of Cobden, and figured I could run between them if the traffic would just speed up to the limit. There aren't a lot of dotted passing lines on this stretch but that didn't stop me from working my way through the vehicles. I got clear in Cobden and figure I just missed getting creamed by the incoming cell. The Quebec side looked positively scary for many miles, but it wasn't coming my way.
The three construction zones I stopped for on the way east were shut down and I slid between two more storm cells near Mattawa. I encountered three OPP cruisers coming out of North Bay, an unusually large number indicating they might be planning a blitz. Or they might be returning to detachments after meeting at Regional HQ. One never knows. After Sturgeon falls, I got stuck for a ways behind another RV doing 75 KP. This should not be allowed in a 90 zone because, on a two lane road with few passing lanes, it causes frustrated people to take chances.
I left Renfrew with a full tank and, at the end, committed to making it the 400 kms to Sudbury on the one tank. I found out the fuel gauge does go below the red and it took 22.922 liters (in a tank that MIGHT hold 26 liters) when I filled in Wahnapitae. I sometimes wonder why I push this. If anyone knows, please tell me.
Home safe and sound, the one thing I was sure of was that I didn't like the change to the front end geometry. The bike rode better on bumps, but the handling was twitchier in turbulence and I didn't feel set in the corners. The bottom line is that when something is working for you, don't mess with it. It won't be practical to take it all the way back to Paul to fix, so I'll get R&L to do it as soon as they can.
Today's Route