Happy Fourth of July to all our American friends and relatives.

Today is the start of the wandering trip through, possibly, North Carolina and North Georgia. We're not really sure. We're meeting Brother Bear, Brad and the ladies in Wellsboro Pennsylvania tomorrow. Today, we ride to Waterloo.

We were up at 5:00 AM doing some final chores. The packing was pretty much an afterthought. It's amazing that, when you do it enough times, it becomes routine and everything falls into place. Sandy was surprised that the saddlebags weren't that full, leading to a run over the mental checklist to see if we had left anything out. Double checks of the medications, credit cards and the identification documents to get into the US were important. Pretty much anything else can be picked up en route.

Despite a leisurely pace, we left the driveway at 9:30. After a stop at the in-laws to see visiting friend Diane, we were out on the road at 10:00. A couple of miles out, Sandy asked if I had put the phone on call forward to the cell. OK, I can't remember everything. This oversight wasn't worth going back for. I'll just have to check the voice mail from time to time. Or not:-)

It was an all right day to ride. The blue skies and sun were good but the 16C temperature (around 60F for the Celsius challenged) was a bit cool and the wind was strong and gusting. Welcome to July in the Frozen North. On the plus side, when I checked the forecast for Maggie Valley North Carolina they were calling for thunderstorms on Sunday and then clear and upper 70's for the next two weeks. I know this can't really happen but I remain the eternal optimist.

We weren't very far south of town when the pickup truck I was following at 110 KPH had to slow because we had caught up to a slower vehicle. At the reduced speed, I had time to look around and was examining a new stretch of four lane construction off in the bush when there was a thump and the bars were jerked sideways in my hand. I instinctively leaned on the throttle and the bike righted itself as I looked in the mirror to see what I had hit. I don't know what kind of roadkill it was but, from the shape of the largest piece, it looked like a nice fat raccoon. I think, from the size of it, that I only hit the edge. That will teach me to pay more attention to the road.

From Sudbury to Parry Sound along the mostly two-lane Highway 69, the traffic was heavy. Southbound, there were the occasional drivers doing the speed limit or below. Because passing was difficult with the long lines of northbound vehicles, sooner or later pretty much everybody was in line behind the slow movers. This is why I pass any traffic I can out in the open. Then, when we get to the lines, I am able to pass more quickly and more often and being ahead reduces the number of vehicles I need to get around in tight circumstances.

Some of you might ask why I need to go faster than the slowest car on the road. First, tight gatherings of frustrated drivers are dangerous. Second, because I can:-) One beef I do have has to do with passing lanes. Some following drivers hang back so that, when you get to the lane, you need a long fast run just to catch the slower vehicles up ahead. Other drivers speed up in the passing lane and are a real hazard because, after limiting the number of vehicles that can get by them, they slow again on the two-lane and frustrated drivers following them sometimes take greater risks to try to get by. In any case, a feel for the traffic flow and some situational awareness would prevent most people from doing things like this.

Approaching Nobel, we were routed onto the new section of road. Nice pavement but, with the large rock cuts to the west side, I can only imagine the drifting snow swirling through here off Georgian Bay come winter. 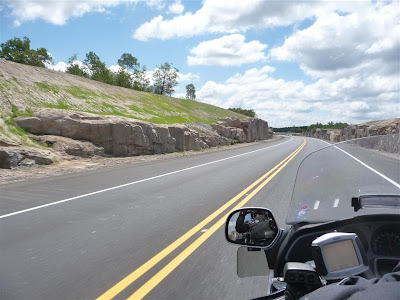 New Highway 69 north of Nobel
We had lunch at McD's in Parry Sound and noted all the sport bikes. This, it turns out, is the weekend of the Parry Sound Sportbike Rally. This longstanding event draws crotch rocketeers from all over North America. We also noted that the McDonald's has streamlined its counter process, vastly speeding up the way orders are handled. Fast food is fast again.

On down around Waubaushene and Barrie, the temperature was still in the 17C range and the crosswinds were getting nastier. Once again, the whole idea of Global Warming seems ludicrous from where I ride. We went on down Highway 400 all the way to CR 88, and then went west through Beeton on over to Hockley. It was a dry Saturday and there was only one bike at the Hockley general Store. Strange. I did note that, from Hockley to Airport road, the pavement seemed messy like there had been a lot of heavy equipment on it. I hope they don't screw up one of the best bike roads in the area.

Coming into Waterloo on Northfield Drive, we passed a group of horse riders heading out on a trail ride. Western saddles and helmets. What ever happened to the good old days of stetsons or, like real cowboys, ball caps? I know, insurance companies......

We arrived at Heather and Tom's shortly after 3:00. Heather was out but Tom was home. He loaned us the car to go to Mark's Work Wearhouse in search of warm weather gloves for Sandy. While the ones I like only go down to Mens Small, which were too big for her, there were some nice ladies gloves in bright, cheery colours. She is now wearing a very pretty shade of blue.

Don't tell anyone but I wiped the bike down before covering it. About then, Heather got home from doing wedding preparation things and Tom took us all to his Mom's for supper. Zofia fed us and, as always, the food was excellent. Then Heather napped while Tom and I watched the NASCAR race from Daytona and Sandy and Zofia talked mother-in-law things. Thanks for the supper and hospitality.