The Grand Canyon of Pennsylvania

We started slow today since we would just be riding around the local area. The first order of business (after the Dunkin' Donuts black coffee) was breakfast. Just up the street was the quaint Wellsboro Diner. The place was full so we got sent downstairs into the gift shop to the 'round table'. Lots of room. Sandy and I were good and had the fruit bowl and coffee. Ron had a regular breakfast and a cinnamon bun that was so large that he couldn't finish it. 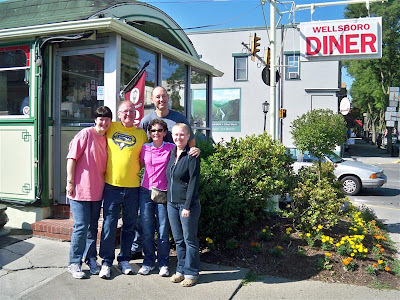 The gang outside the Wellsboro Diner 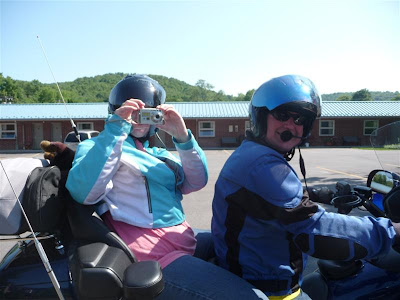 Have camera, will travel
Laurie & Ron
Once we were fed, we headed out for Leonard Harrison State Park with Ron in the lead. Just out of town on US 6 West, we took SR 660 which wound its way all the way to the park on the east rim of Pine Creek Canyon (aka The Grand Canyon of Pennsylvania). 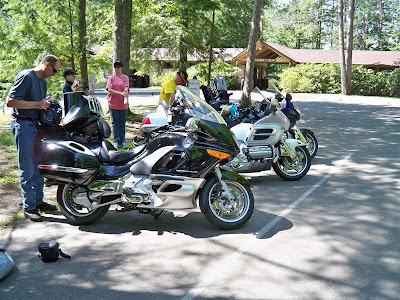 Stowing the gear at Leonard Harrison State Park
Admission was free and we took in the canyon view from the first observation deck. 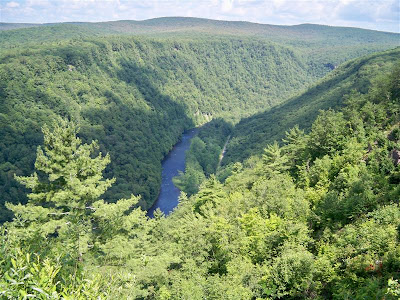 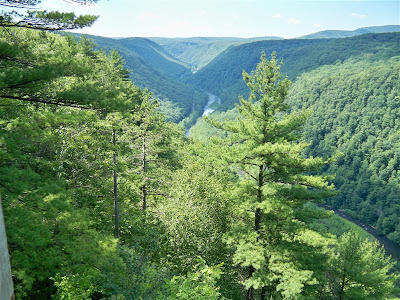 Pine Creek Canyon looking south
Then we got the bright idea that we would walk down the Overlook Trail. It was quite a way down along the canyon rim and Ron took a moment to test his control of his fear of heights. Although you can't see it in the photo, there is a better than 100 foot sheer drop just beyond his toes. 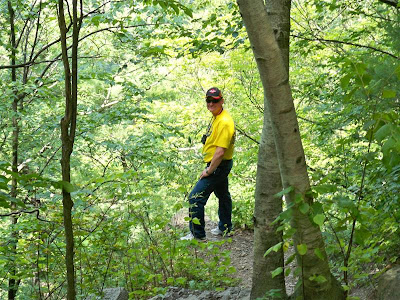 Ron living dangerously
At the bottom, we cam to Otter View, a nice perspective on the canyon. 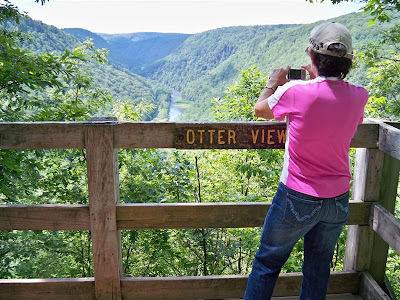 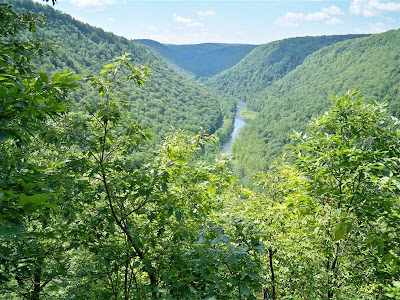 What she is photographing
Now, as we all know in the tourist world, what goes down must come up. Way up and steep too. Laurie, strangely, can go up much better than she can descend. 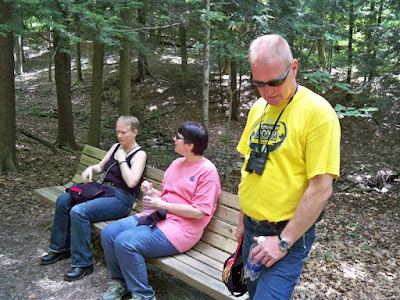 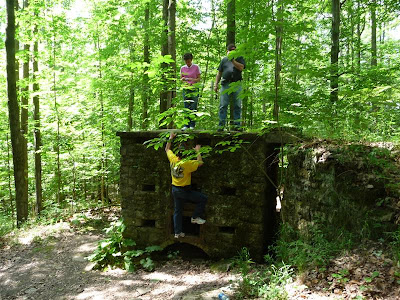 Checking out the old incinerator near the trail head 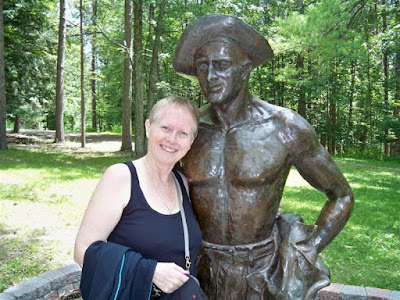 Sandy and her new friend
(a memorial to the CCC workers during the Great Depression)
Leaving the park, we went back to Wellsboro to fuel up and then headed north on US 6 (aka The Grand Army of the Republic Highway), SR 287, then west on 249 to Kerryville and northwest on SR 4017 to 49 at Osceola. From there it was west again on 49 through Knoxville to Westfield. On the way, we were lucky a car was ahead of us as a doe and fawn tried to cross the road from a farmhouse yard. Disaster was averted and the deer backtracked but, without the car, we probably would have been on a collision course. 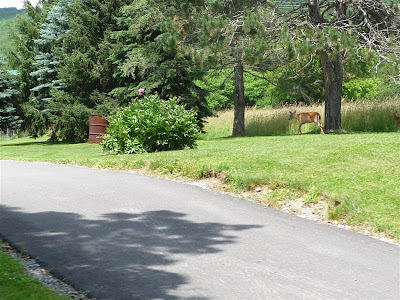 The doe and, at the right edge, Bambi 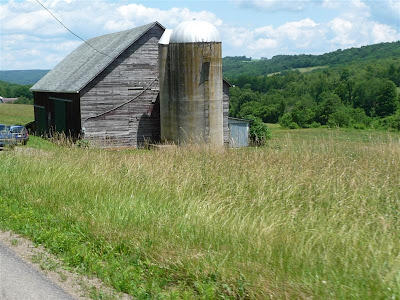 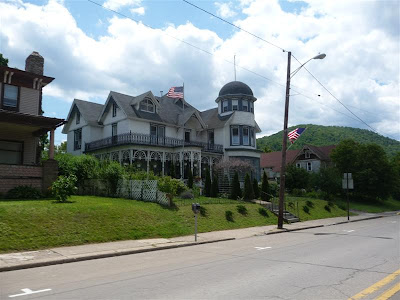 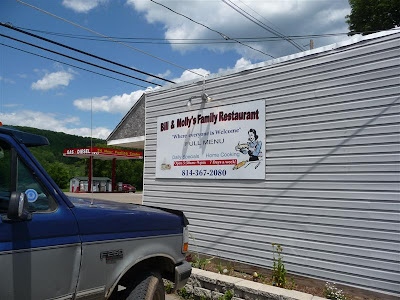 Bill & Molly's in Westfield
In Westfield, we stopped at Bill & Molly's Restaurant for lunch. This was one of those odd places where the server was fun and the food was good. Brad decided to try a 'Texas hot', something we saw listed a few places. To quote one website:

"Try our Texas Hot - with a recipe that dates back to 1914, it's tried and true! A plump, juicy hot dog with a squirt of mustard, sprinkled with onions, and smothered with our famous sauce." 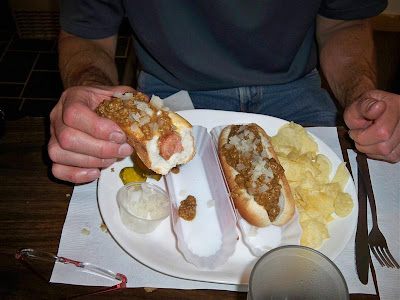 Brad's 'Texas Hot' lunch minus a bite
He said they were very good. The rest of us tried more familiar fare.

From Westfield, we headed south on SR 349 and then back east on US 6 but took a detour to check out the west rim of the canyon at Colton State Park. The road to the park is narrow and winds in here making this park the road less travelled. There are campsites and overlooks but no Visitor Centre. On the way up, we passed what looked like a Sur-Trac snowmobile trail groomer in a maintenance yard. 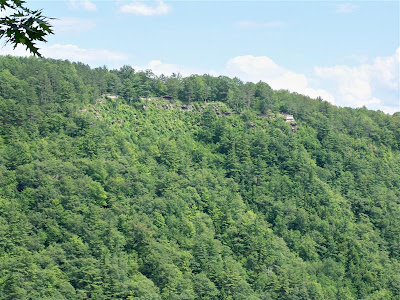 The Colton view of the Leonard Harrison overlook 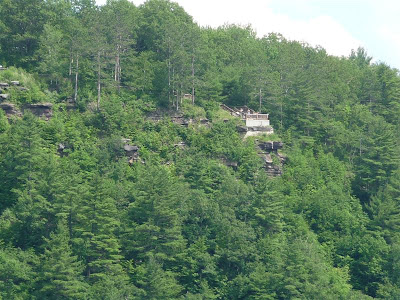 The same using the 10x zoom 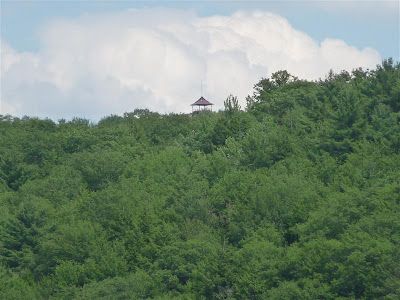 The scenic tower on the Harrison side 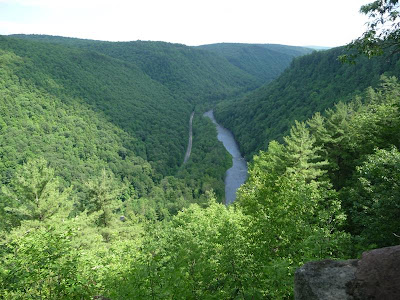 Looking south down the canyon from Colton
From Colton, we returned to US 6 and then turned onto SR 362 where we found two stage trucks belonging to the Rascal Flatts Unstoppable Tour parked at the intersection. They were supposed to be playing Darien Lake New York on June 11th and Scranton Pennsylvania on June 12th. I assume these were the Scranton trucks being hidden away here for a few days. 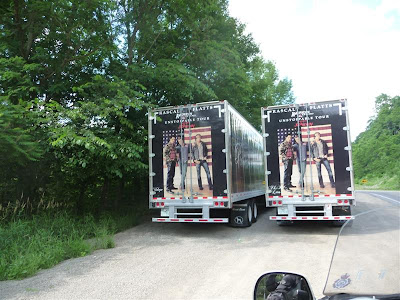 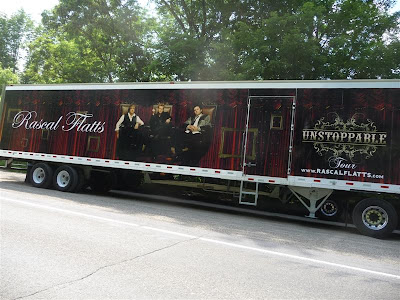 Rascal Flatts Trucks
From here, we headed back towards Leonard Harrison SP to Animaland. The admission was a bit steeper than we wanted to pay even to see a mountain lion. Instead, we had ice cream and visited with a one-eared kitty on a table. 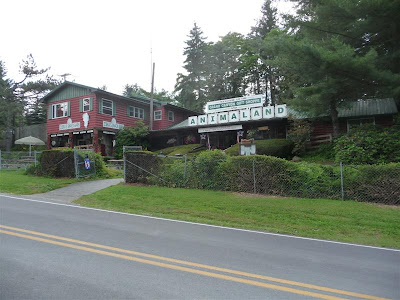 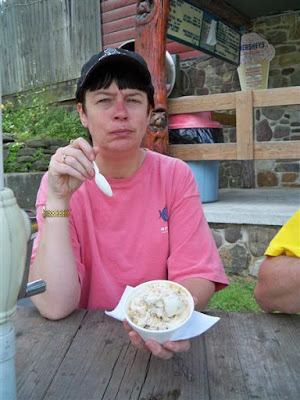 Laurie eating muddy sneakers while we had root beer floats 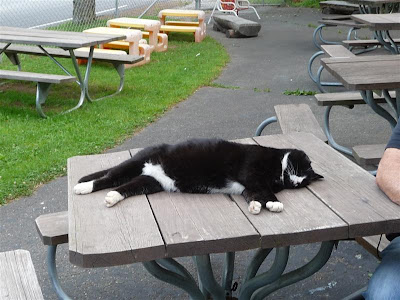 The one eared cat
From Animaland, we returned to the Sherwood and kicked back before going over to thee Wellsboro Steakhouse for a fine supper. After that, there was a bit of trip planning and then we turned in for the night.