It was raining hard at 6:00 when we woke up. The radar showed it was not that big and was well organized so it should clear us soon with nothing behind it. I took the old tunnel blocks from the bike, which had 82K miles on Sherm's Kokopelli and probably 75K miles on Pogo, and left them in the room with regrets. This should confuse housekeeping. The rain cleared before 7:00 but we were waiting until Schroader's Honda opened at 9:00. 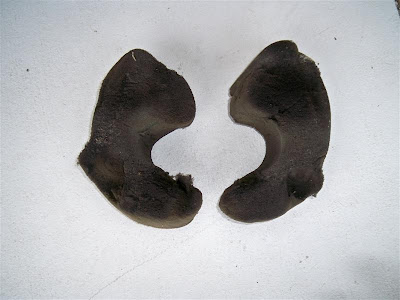 The old tunnel blocks
We loaded everything up and headed just up the street to Schroader's. I got some rubber washers that Ron and I were missing on the front fender bolts and some grommets for where the side covers attach to the injector covers. Mine were getting pretty ratty. I also put in some pre-mixed coolant. Ron bought a head skin and an extended warranty while Brad got some Frogg-Toggs rain gear. The ladies talked to Catherine, one of the owners, who described how they got into Honda in 1970. The lady is 73 but doesn't look anything like it. Their usual Wing inventory is about 100 units and they have many accessories. One thing that caught Brad's attention was the variety of after-market seats for taller people. 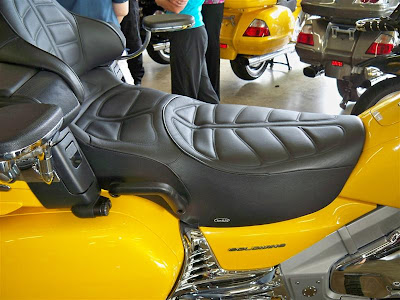 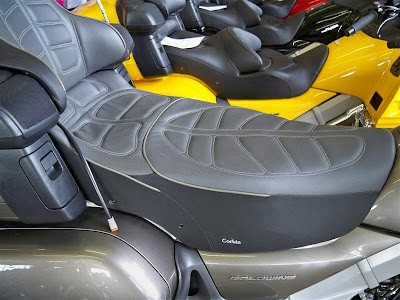 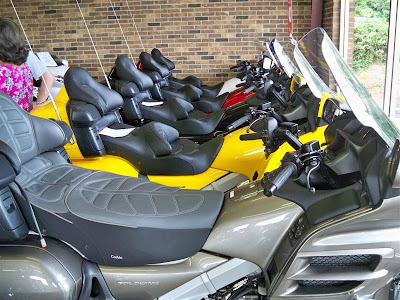 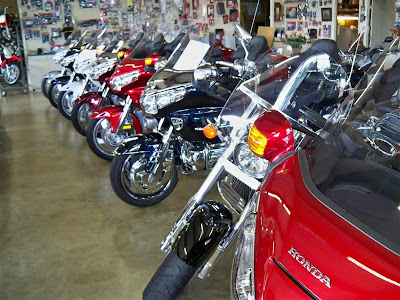 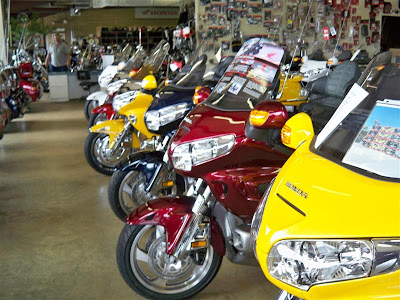 And still one more 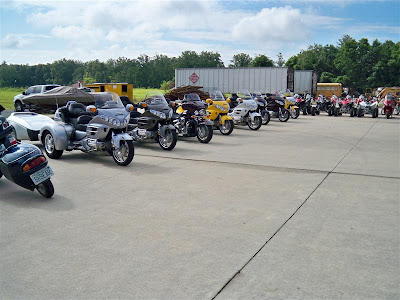 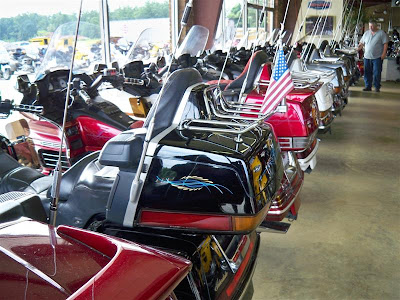 And these used GL1500's
We found the people to be friendly and genuinely interested in our stories and and our needs. It was a good visit. We learned that they had just sold a yellow Wing to the King of Kuwait. Eventually, though, it was time to hit the road again. 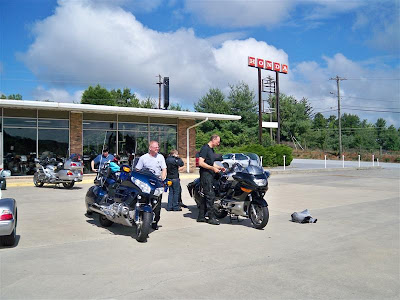 Ron and Brad getting ready to head out
From Hendersonville, we headed out US 64 towards Bat Cave and Chimney Rock. I had forgotten all the apple places on the outskirts of Hendersonville. Riding up over the Eastern Continental Divide, we then wound down to Bat Cave, which is just a little town. There must be a cave somewhere but I've never seen it. We then turned towards Chimney Rock and entered the new State Park.

With all the concerns about The Dragon and Wolf Pen gap, this was by far our biggest challenge. The road up is almost two cars wide with no centre line. In the second hairpin, we met a small semi that had been making deliveries. It was a mile to the entrance where we paid the fee and then another mile and a half up the narrow road with tight switchbacks and slow traffic. I soon found that the foam block removal hadn't solved the problem as the temperature gauge went almost to the red. I stopped once in one of the few pullouts and let it cool down a bit. Eventually, we got to the top and parked in the motorcycle area.

A couple from Greenville, NORTH Carolina arrived soon after on a Suzuki C50 like Heather and Tom's. He was retired Air Force and she had relatives in both Beverly, Massachusetts (Brad & Judy) and Londonderry, New Hampshire. Brad and Judy chose to walk up the 400 stairs to the top of the rock while the rest of us took the elevator up the 26 story shaft. 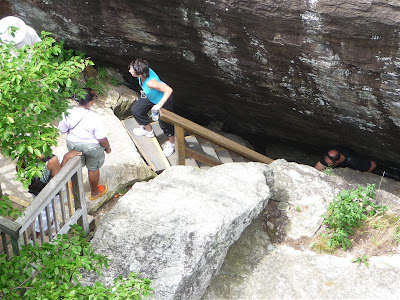 Judy & Brad climbing the stairs
I managed to make it up the stairs onto the rock where the view from the top was spectacular. We could see Lake Lure and the Geneva Hotel where we stayed for years, getting up each morning to look at Chimney Rock without actually climbing it. 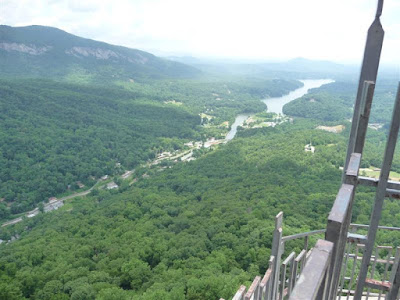 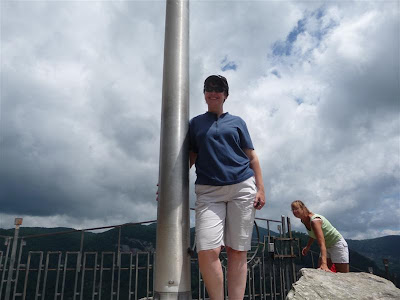 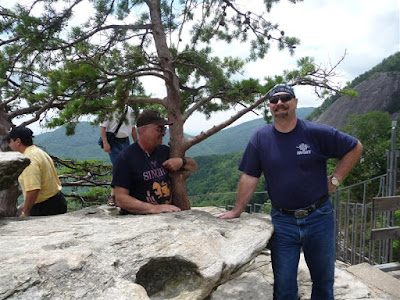 Yours truly hugging a tree 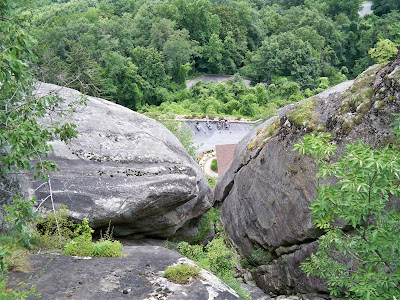 Looking down on our bikes
When we rode the elevator back down to the parking lot, I couldn't find my headskin. After looking all over, I resigned myself to sweating in my helmet lining and we rode back down the hill to the village. Stopping at Genny's Restaurant, an old hangout from SEVROC days, I discovered the wayward skin under my beaded seatcover, a location I guess I put it to keep it from blowing away.

We all had lunch at Genny's with Sandy chowing down on the blackberry cobbler she used to have here at the WARB breakfast. Then we set out in the great heat on US 64 towards Rutherfordton. The famous Margarita Grill is now named The Beachside Grill so another tradition has gone by the wayside. The curves leading out of town are well banked and about as perfect as you can get.

We continued on towards Rutherfordton and then Morganton, meeting rain near a little gas station where they didn't take credit cards. I can't remember the last time I saw one of these. We hid under the overhang until the heavy rain eased and Ron & Laurie put rain suits on while the rest of us decided to brave the elements. A couple of miles down the road, the rain stopped and it was evident from the dry pavement that it had never rained here at all.

As we reached Morganton, it started raining again and our plan to reach Lenoir went out the window. After the GPS took us to a non-existent Super 8, we swung back and checked in at the Comfort Inn. There were many golfers in town for the Hickory US Open at Mimosa Hills, a tournament played with antique hickory clubs. Players were here from all over the world.

The Comfort Inn was a little less than expected. They had no little soap and shampoo in the rooms because their big shipment came in marked Quality Inn so they sent it back. The did provide a large bar of soap if you asked at the desk. Also, they were running the whole hotel on one Wireless Access Point which didn't quite reach our room. Archaic.

We walked across to Butch's BBQ for some pork and then the girls went shopping at WalMart while the guys went back to the hotel after a beer stop at the adjacent gas station. Strangely, there were no sidewalks anywhere. Then Ron and I walked to Lowes where we had two Honda Accord keys cut to fit the bike. Out back of the hotel, we sat at a table while he cut the keys with a hacksaw and assembled two knobs for Pogo. One would go in the gas door keyhole while the other fit in the fairing pocket lock. Now I won't have to take my key out of the ignition to access either one.

We would be running about 330 miles to Charlottesville tomorrow on back roads so we decided to turn in relatively early.

Friends of ours visited Chimney Rock in July too. It would have been interesting had they visited the same time as you. Our friends were at Chimney Rock 3 days before you.