Sandy and I were up at 6:00 AM but didn't knock on Heather and Tom's door until 7:00. The early temperature showed as 8C but that was supposed to rise quickly. The hour gave me a chance to finish yesterday's blog and post my bills to Quickbooks. There was a quick stop a Zofia's to get the Suzuki's and then another at McDonald's for breakfast before hitting the road.

On the way through Cambridge, we stopped to see Jolene (and Kim & Mike, of course). She is 6 1/2 months old and is starting to get teeth. 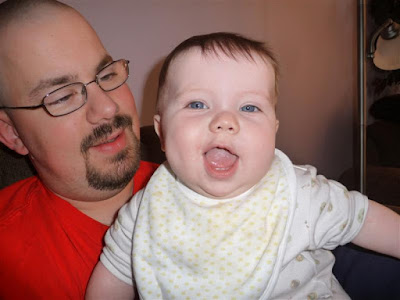 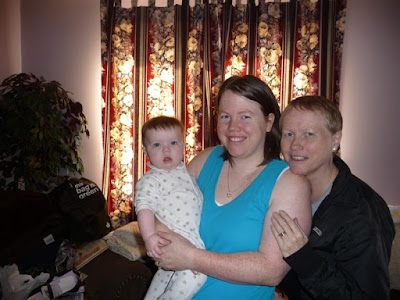 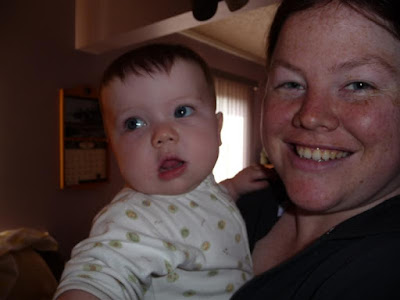 Mike's Jolene pictures, for anyone who is interested
We left Cambridge at 10:15 with Heather & Tom under blue skies, riding Highways 8, 5 and 6 into Hamilton. Highway 6 down the hill is still under construction. It seems like this is another 'forever' project. At the bottom of the hill, we caught the 403 to the QEW and over the Burlington Skyway. The temperature, warmer than we are used to, cooled a bit near the water. I stopped at a service place in Grimsby and fueled while Sandy went inside to remove her long underwear. She also stowed the electric jacket. Heather and Tom left us here, planning to work their way back to Waterloo via back roads.

Back on the QEW, I picked up the pace to flow with the fastest traffic. Through St. Catherines and over that skyway, there is some major road construction going down so we were slowed to a crawl in a few places but not for long. Then it was on to Fort Erie and the Peace Bridge.

The bridge traffic was light but there were still six or eight vehicles lined up for each booth, except the NEXUS lane where there were only three. This would be our first time using the actual special lane and we weren't sure how it would go. It went very well. As we approached the booth, Sandy held up both cards in front of a scanner. The LED indicator said it had read two cards. Then we pulled into the booth where the agent asked my licence plate number. Then he asked if we had anything to declare and I said no. At that, he told us we were good to go. Easy as anything.

It was not totally trouble free, however. Pulling out of the booth across the plaza to the I-90 South ramp, Sandy dropped one of the NEXUS cards. I stopped and it's a good thing the headset cables pull straight out because they did as she jumped off the bike and dodged traffic as she went back to pick up the errant card. Luckily, although a car straddled the card, nobody actually hit it with a tire.

We skipped around Buffalo on I-190 - I-90, 400 and 78 to 20A East. This was a pleasant road wandering through the countryside at 45 mph. There was more up and down than side by side. Several ridges had large wind turbines on them. 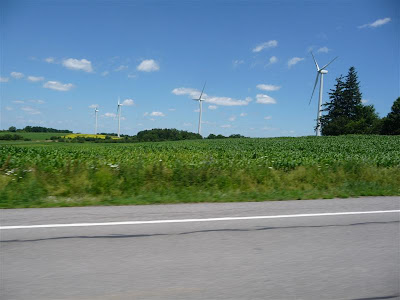 Wind Turbines on Highway 20A
One thing did impress me. We met an oncoming ambulance with lights and siren going on the two lane road and everyone pulled to the right and stopped. That is the way it should be done.

Warsaw New York is in a valley. They have a mandatory brake check for trucks, buses and trailer haulers before starting down the grade into town. I guess they don't want a 30,000 Pounds of Bananas episode here.

We went on through Mount Morris, home of the old Rochester Peacemakers Lost Weekend rallies in the 1980's. Then we went past Groveland Correctional Facility which had a number of separate complexes, each with their own buildings, towers and razor wire.

Now we were supposed to get on I-390 South but the ramp was closed and we were detoured a number of miles down the road to the next interchange. We rode 390 to where it ended and continued on I-86 to Painted Post New York. Back in 1978, we got stuck in the infamous Painted Post traffic circle, not sure which exit to take because someone decided that highway numbers weren't necessary. The exit we wanted said Williamsport but I didn't know this because it was in the next state on the next map. This time, the new US 15 ramp wasn't in the GPS and I got screwed up again. As Yogi said, deja vu all over again.

Riding south on US 15, we encountered a stretch of two lane road but it was back to four lane by the time we reached the Pennsylvania line. This was new as well and the GPS thought we were going cross country again. This really seems to bother her. I need to get a map update soon. We followed 15 to SR 287 which took us to Wellsboro. On the way, we saw an osprey and a scenic railroad. 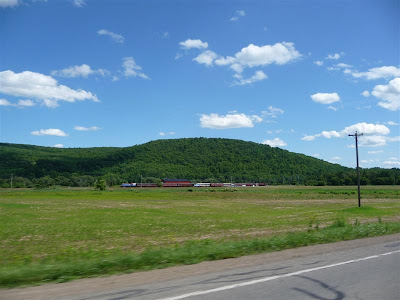 Tioga Central Railroad Photo for Bob
We arrived at the Sherwood Motel just before 5:00. The others weren't here yet so we checked in and found our room right in front of the pool. This is a nice place and I'd stay here again. Sandy's only beef is that the peephole in the door, as in most motels, is too high for her to see out. Ron called soon after we got here and said they would be in about 6:30. They actually arrived about 7:00 which was pretty good because Brad just finished the repair work on his BMW LT this morning. they rolled in behind a large group of Harleys from Ohio heading for New England. 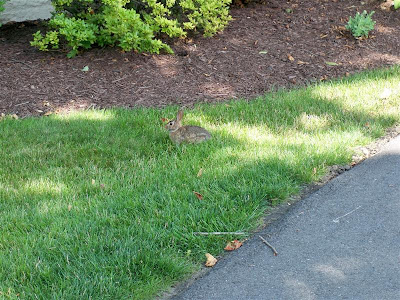 Rabbit on the Sherwood Motel Lawn
After the late arrivals got settled and cleaned up, we walked down Main Street to the historical Penn Wells Hotel where the dining room closed at 8:00. It was 7:45 and they seated us. Some of the food was unusual, but perhaps the chef had already gone home. The desk clerk, however, was a hoot.

After eating, we walked back to the Sherwood and the girls turned in while the guys looked at some maps and tried to figure out where we might be going. It will become clear to us in the fullness of time. Or not. I retired at about 10:30.

Your link for Sherwood Motel works for me! This is the first time tht I have been able to check out this motel on the internet. As I mentioned in Facebook, the link I used kept crashing my computer. I'll have to compare URLs.

Hope the road is smooth and safe.Cjd and myself as well as two ither ladies in the van drove straight from Dartmouth Nova Scotia home took about 19 hours, and it rained cats and dogs most of the way.We saw many motorcyclists soaked to the bone and in Edmunston met up wit a member of the Red Knights actually a VP so i will get his card to a fire services person in Sudbury.
Hope to see you home safe and sound soon.
Life is what it is and riding is always good.