Kim, Mike and Jolene were visiting Mom and Rabbi in the Soo (Sault Ste. Marie, Ontario for Daley and the southern crowd). We were down in Waterloo when they came through Sudbury and stayed at our place, so I figured I would take a ride down for the day and see them while also delivering a surplus Linksys router to get Rabbi on-line via WiFi. Leo volunteered to go along for the ride.
It was overcast with specks of rain first thing, but drier when Leo and I set out at 7:45. Before I cleared the subdivision, Sandy called to tell me I had forgotten the wedding invitations I was supposed to be delivering. We left a second time a couple of minutes later.
We hit a bit of rain around Nairn Centre but it soon cleared. The comfort stop at Blind River was just that. Any thought of coffee was out of the question because, as usual, the lineup for service was right out the door.
On the new four lane into the Soo, we encountered and OPP constable using LIDAR, the laser speed checking device. I guess my 108 kph in a 90 was OK with him (something I count on) because he didn't bat an eye. Gas in the Soo was $0.909 / liter, a full five cents less than Sudbury. I've never figured out why we have these variations but I'm sure it's a sign of some kind of price fixing.
The visit in the Soo wasn't a long one because the weather radar showed a system moving in from Michigan. I installed the router and got it working, but found later that it was past its "best before" date and Rabbi had to get another one. Oh well, I tried. Jolene was in a good mood as usual and I had fun seeing her with Great Grandma and Great Uncle Dave. 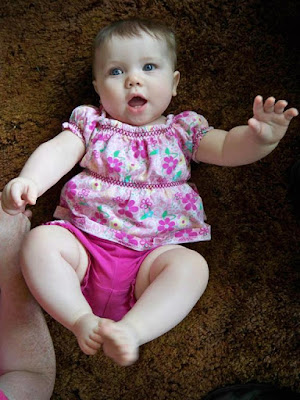 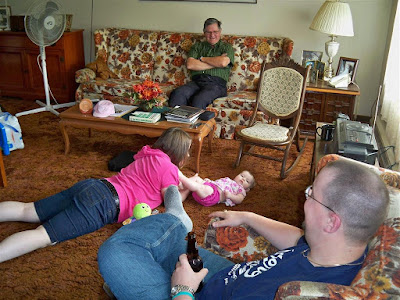 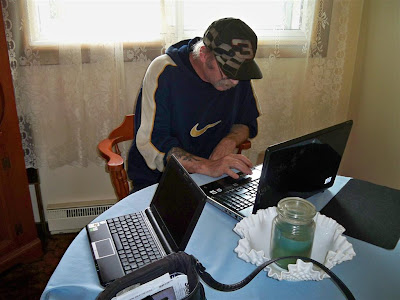 Rabbi checking his portfolio via WiFi
We left town about 1:30 with thoughts of the tail of weather hooking in from the Upper Peninsula. Still, we didn't hustle which was good because we met the LIDAR unit again. I didn't see this one at first because the officer was hiding behind an old pickup truck parked on the side of the road. Again, 18 over was fine by him.
Near Bruce Mines, we got behind and empty wood chip truck. The solid sides with the open top and expanded metal back door created the worst turbulence I have seen in a long time. In Blind River, the temperature was up to 25C and I stripped the jacket down to mesh. That was good because we hit two stretches of single lane traffic near Beaver Lake and had to sit for quite a while in the heat. OK, it wasn't heat like down south, but we were warm.
We arrived home in time for supper after a good day of riding and visiting.