We were awake early to find radar showing a green, orange and red blob moving quickly towards Wellsboro. It hit about 6:00 AM with thunder, lightning and heavy rain. Fortunately, it wasn't a large storm and it cleared by 8:00 in time for us to wander over to Dunkin' Donuts for coffee and breakfast.

I was talking to the owner of the Sherwood about the very nice looking 1959 MGA he had. He said he really enjoyed the car but wanted to sell it and get a GoldWing.

By 8:45, we were loaded and rolling. I led down 287 and across 414 to US 15 South under partly cloudy skies. Mist was rising off the damp road as we traversed rolling hills through heavy trees. Laurie saw a deer and we took it easy just in case. We followed 15 to Williamsport where we made an early stop because someone had forgotten that a significant quantity of water plus a large coffee wasn't the best idea before riding.

South of Sunbury on 15, the vegetation changed. There were different kinds of trees and the vegetation was more lush with kudzu starting to become prevalent. It definitely had a more southern feel. One thing we found funny was a Wellsboro billboard on the southbound side when we all know the town is north. We followed 15 to I-81 at Harrisburg and then followed that, threading between some dark clouds, to Carline Pennsylvania where we stopped for lunch at Arby's. Ron found that Arby's idea of beef wasn't quite to his liking. 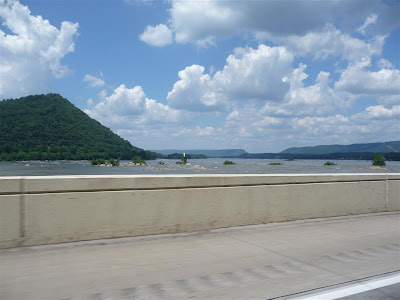 The Susquehanna River from US 15
Before leaving Carlisle, we took off some warm gear because the temperature was becoming quite warm. We also called ahead to the Super 8 in Winchester Virginia (where sandy and I stayed in 2007) and made reservations. Then we followed I-81 down into Maryland.

North of Hagerstown, Ron suggested that we jump off and take US 11, which parallels 81 but without all the big trucks. We did, which put us right into the heart of Hagerstown. This is a city with many old, historic buildings and has painted butterflies like the lamas in Ludlow, Vermont or the buffaloes in Custer, South Dakota. 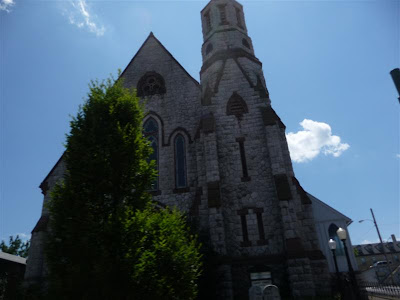 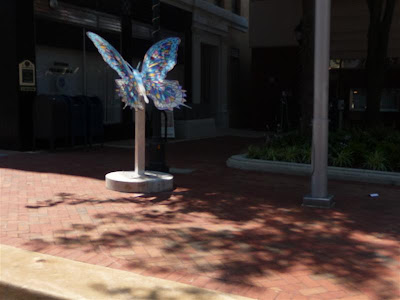 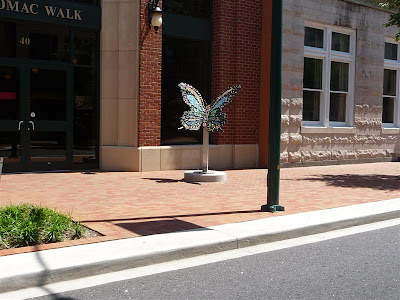 And another one
In Hagerstown, I misread an intersection and, instead of leaving town on US 11, we found ourselves heading south on Maryland 65. This route reinforced my perception that Maryland is a very clean place. 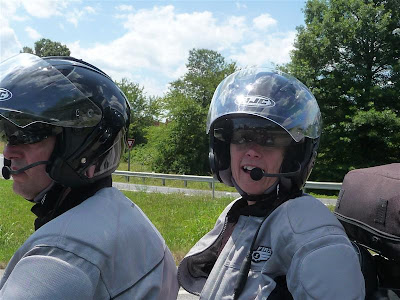 Brad and Judy south of the Mason-Dixon Line
By blind luck, 65 took us right by the Antietam Battlefield, the site of the deadliest one day battle of the Civil War. We toured the Visitor Center but, after a talk with a very pretty ranger named Holly, I realized I would have to come back for several days to explore the whole place. 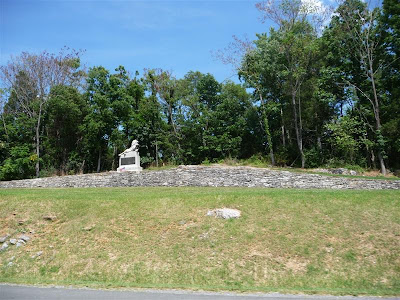 One of the Antietam monuments 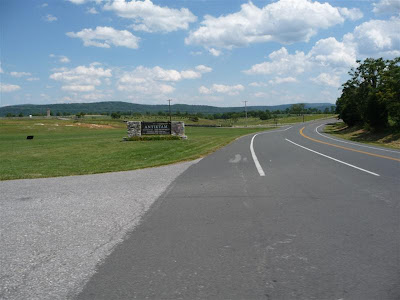 Entrance to the Battlefield Visitor Center 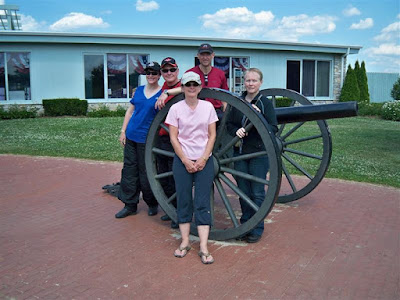 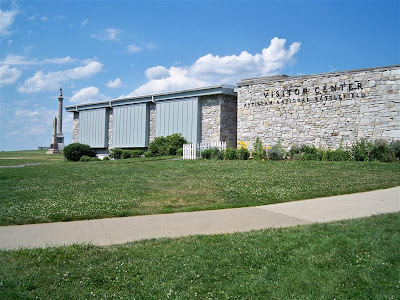 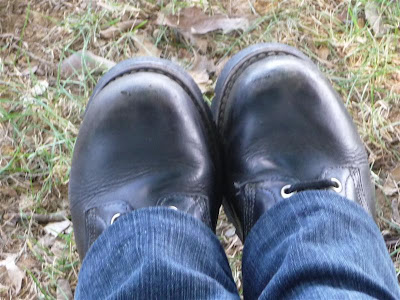 Sandy's pretty little feet
From the battlefield, we followed Md 65 to Md 34 and into West (By God) Virginia. At one stop sign, the fellow ahead of us was driving a Porsche Boxter. Unfortunately, as he pulled forward, he stalled the car. I guess we shouldn't have laughed so loud because he then proceeded to burn rubber out of there in (I assume) embarrassment. 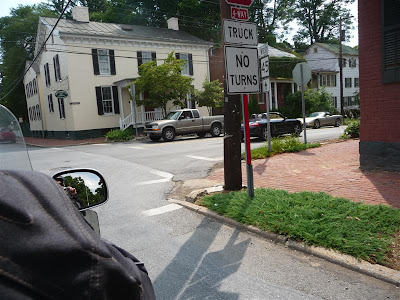 The Boxter escapes to the right
Leaving West (BG) Virginia, we connected with Virginia 611 and then Va 7 which took us to Winchester. Some back roads only a GPS user would follow brought us to the motel.

We unloaded and then went across the street to the Asian Garden Buffet. One good sign at a Chinese buffet is a table of people speaking Chinese and using chopsticks. $8.95 bought us a fine buffet with the usual fare plus a few more exotic things like octopus and sushi. We figure we did quite well there. After supper, we stopped at Red Lion for some water bottles There I saw a lottery ticket vending machine. Different. 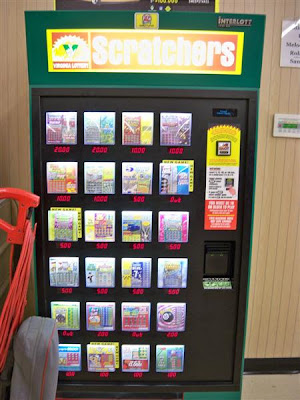 Lottery ticket vending machine
After we got back to the hotel, Ron and Laurie joined us for some song comparisons. I gave him all the Tom Lehrer runes I had. Then everyone turned in for the night because tomorrow we start the twisty road riding.

Flip texted me while we were at the Red Lion. I called him back and said I would keep him posted on when we'd be down in North Carolina. If possible, we're going to try to hook up while we're down here.