You may recall that I had a Traxxion suspension installed in the Wing back in 2007. Max, the designer, suggested that the front end be serviced every 20,000 miles including replacing the fork seals, bushings and fluid. Based on my calculations, I have put about 55,000 miles on since the installation so I am way overdue.
The one problem with fancy aftermarket gear is getting it serviced. I could take it back to Traxxion in Woodstock, Georgia but that wasn't convenient. I printed out three pages of detailed directions Mike at Traxxion pointed me to on the Web and took them to R&L. They took a close look at the work involved and the special tools required and came to the conclusion that they would rather not try to do it. I then called Paul Hilliard at YOUNEEDITDONE down in Merrickville, Ontario, the only installer in this part of Canada, and set up an appointment for the 24th. Merrickville is over 300 miles away so I would leave today and spend the night in Smiths Falls allowing me to be there first thing tomorrow morning.
Radar showed rain moving in from the south, so I suited up before leaving. This included my new rain totes with the solid rubber sole. The first drops started to fall not far out of town and, by the time I made my first gas stop in Deep River, I was well into a steady warm front rain, the kind that just doesn't let up. I had some soup and a sandwich after I got gas and continued on in the wet, although the Tourmaster suit and the totes kept almost all of it away from my clothes.
Around Cobden, the sky got very black and the rain turned into and absolute frog strangler for a bit. Then it eased and, as I looked at the very ugly clouds in my mirrors, I asked myself if I had actually gone through THAT. South of Arnprior, the rain eased and by Almonte the road was drying. It stayed this way until I arrived in Smiths Falls, the (former) Chocolate Capital of Canada. Hershey was a big presence here until they moved their factory to Mexico a few years ago.
The Comfort Inn in Smiths Falls was different. The rooms all faced the beautiful Rideau Canal but the parking was in the back lot of the Giant Tiger. The elevator was being refurbished so I took the stairs to the middle of the 2nd floor hall, then went to the end of the hallway to find the stairs to the 3rd floor. Not the easiest situation, but the view from my balcony was excellent.
I walked a couple of blocks to the main street where I stopped at Rob Roy's Pub for supper. I had a home made shepherd's pie (very good but I didn't take a picture) and watched the locals come and go. The proprietor was Irish, something I found odd in a pub named for a Scotsman. 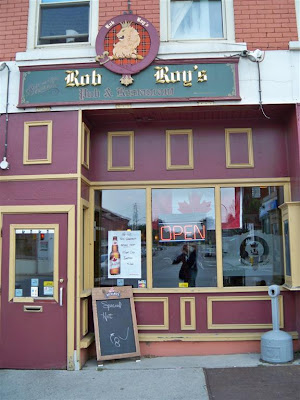 Rob Roy's Pub - Smith Falls Ontario
Back at the hotel, I met an older fellow from White Rock BC. He had bought an old 850 Suzuki in Ottawa and was trying to ride it home. Unfortunately, he was a new rider with only a few miles under his belt and the rain today and the forecast had him spooked. He was going to take the bike back to Ottawa and try another time.
I turned in fairly early after watching a bit of TV and wishing for a drier day tomorrow.
Today's Route