The air was clear when we looked outside at 6:00 AM. By 6:15, however, Morganton was wreathed in fog but it started to clear as we prepared to roll out. The hickory golfers were getting ready to head for the course as well and we caught two of them admiring the 1912 automobile trucked in from South Carolina to transport them to the course. 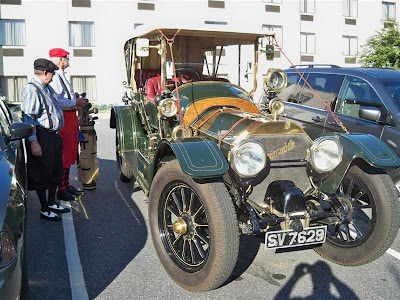 Golfers step back in time
We also had a moment to discuss the case of a teenage girl who was so busy texting while she walked down the street that she fell into an open manhole. It was interesting to watch the attractive young lady describe her ordeal on the news without any comprehension that her actions contributed in any way to the incident. I expect that if she isn't driving already, she will be soon and we will have one more to watch out for on the roads.

We left Morganton on US 64 at 8:20 under now sunny skies. The road was another perfectly banked, winding stretch that one might find in motorcycle heaven. It was cool in the shadows and warmer in the sun, all-in-all a very comfortable start to the day. In Lenoir, we connected with SR 18 North and rode to the famous NASCAR town of North Wilksboro. The cancellation of Winston Cup Racing here years ago signaled a change in the focus of the racing organization as it started to abandon its roots in favour of greater national popularity, a move lamented by its traditional fan base.

From North Wilks, we took SR 268 northeast to where it intersected with SR 601. On the way, I saw more kudzu covered trees, poles and wires and reflected on my reading about "the vine that ate the south". Originally imported from Japan, it was initially favoured as forage for its high protein content and enjoyed for other beneficial properties and purposes. The US government promoted its introduction and even had CCC workers plant it from 1935 to 1950. In a typical example of the Law of Unintended Consequences, it found the perfect home in the American south and, by 1953, was declared a pest weed. It is now one of the definitive landmarks when travelling in the southeastern United States. 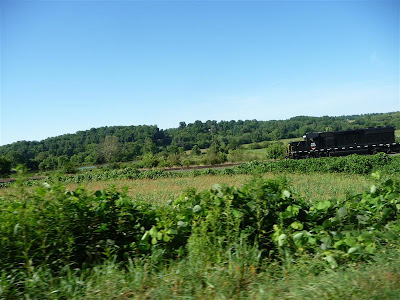 A train picture for Bob
At the intersection of SRs 268 and 601 lie two gas stations. We stopped at the Citgo for a comfort and water stop. 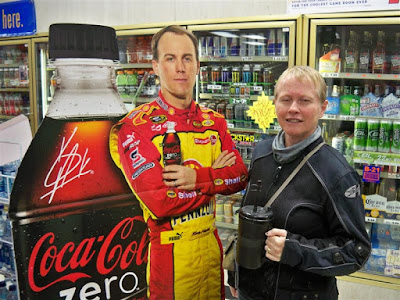 Sandy and friend at the Citgo
The gentleman painting the metal posts in front of the station told me that he always wanted a trike. He and the others were very pleasant, showing true southern hospitality to the traveling northerners. He encouraged us to visit "Mayberry", aka Mt. Airy, just up the road and the original home of Andy Griffith. We were headed that way anyway and I let the GPS take us right through downtown. It's a pretty place and I can just see Andy and Barney having little need to maintain law and order here. 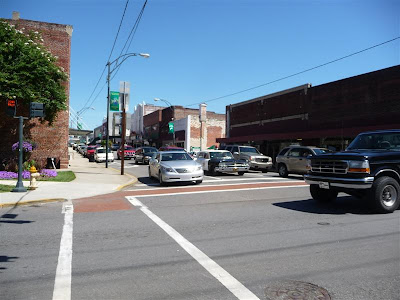 You can almost see the old police car if you imagine hard enough
The humidity was lower today and, even as the temperature heated up, it was much nicer riding than the last couple of days. We left Mt. Airy on SR 103 entering Virginia at a spot marked only by a pleasant curve in the road. A turn on SR 8 and then US 58 brought us to the edge of Martinsville, another famous NASCAR spot, where we stopped at Subway for lunch. 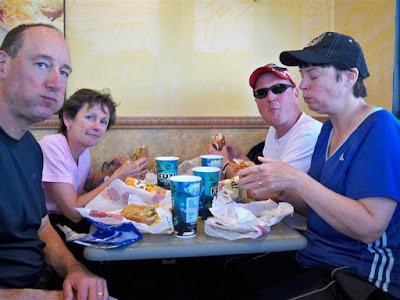 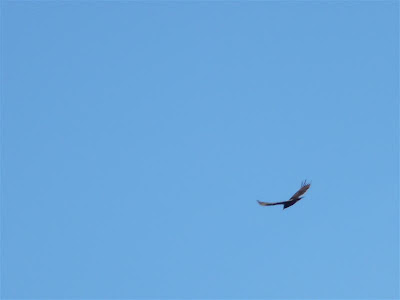 A vulture looking for his own meal 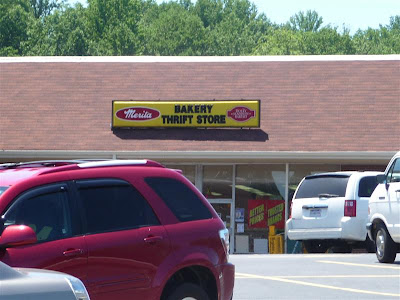 What is a bakery thrift store?
We left Martinsville on SR 57 and then turned on SR 799, aka Climax Road. This got a few chuckles and the sound of heavy breathing from a few of us. Then it was Piney Road to SR 40 to US 29 North, a major highway that we followed as it took us north and around Lynchburg. Every power line we crossed leaked enough to cause major static over the CB radios, causing us to raise the squelch levels. I'm going to explore getting a GMRS radio setup on the Wing before our next ride with these guys.

We took a brief break at a Sheetz before continuing on towards Charlottesville, our destination of the day. The GPS thought it would be nice if we took a detour into town and had us turn right on 708 and then left on Old Lynchburg Road. This is the kind of road that no tourist would find unless they were moving at the whim of a GPS. It was narrow with no centre line and twisted and turned over small hills and valleys under the cover of thick trees. Pleasant houses sporadically bordered both sides and we met what appeared to be rush hour traffic going home. They knew the road and were moving at a good clip. 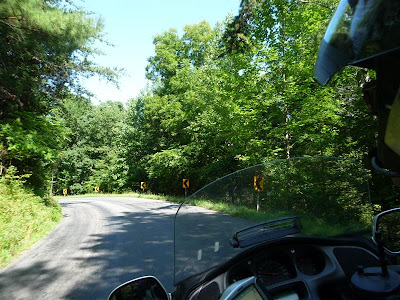 Old Lynchburg Road
Suddenly, without warning, the narrow road burst into Charlottesville and became, all at once, a modern four lane divided street. Talk about culture shock. I guess the big new road had to end somewhere. We saw an Albemarle County Police car turn out of the station. I was unfamiliar with County Police since most American county enforcement I know of is provided by Sheriff's Departments, so I looked it up and found they exist in metropolitan counties in some areas.

Our ride through Charlottesville was far from a treat. The pleasant scenery and stately buildings were offset by the fact that we were tired, it was very hot and the traffic was stop and go. I was managing the bike carefully to keep the temperature gauge out of the red. Still, Sandy got a few photos showing the lovely architecture. 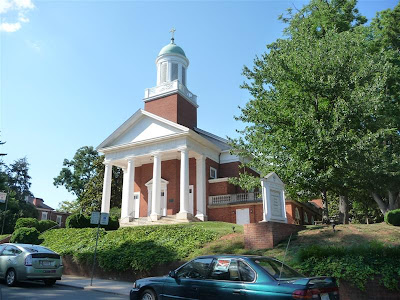 A church in Charlottesville 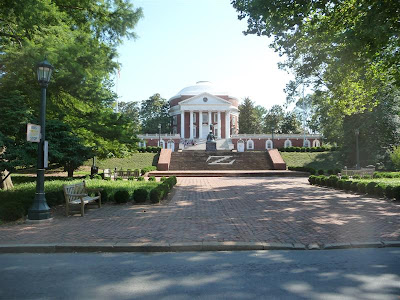 The University of Virginia
We paused for a moment a to consider our options and let the GPS take us to a Days Inn. When we got there, the lot was full and there were three State Police cars in front of the door. Things didn't look promising, but the older desk clerk managed to get us three king rooms on the ground floor almost side by side where we could park in front of our doors. And the rate was reasonable. I was warned that the WiFi might not be the best but I hooked up with no problem.

Before supper, we availed ourselves of the large L shaped pool It had two separate deep ends with the shallow section in the middle. Then we took the desk man's advice and walked next door to the Aberdeen Barn for supper.

The Aberdeen chef was outside greeting patrons and we were seated inside immediately. The ambiance was nice, the service was very good and the food was excellent. On the menu, it said:

"our steaks are their best when served rare or medium - excessive broiling ruins flavour and tenderness - we will do it for you if you insist but it breaks our heart"
Ron was disappointed that they didn't have Bearnaise sauce, but at least they had heard of it. They offered it years ago but the public in this region did not express any demand and they had to keep throwing it out. 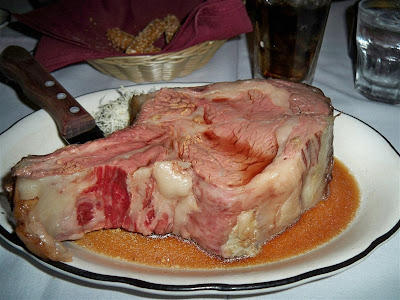 My choice was the thick cut of Prime Rib 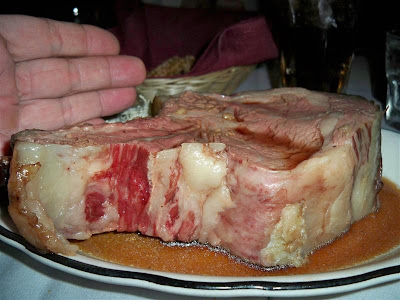 It was a very thick cut
Without our knowledge, the New Englanders conspired against us and we did not receive a bill tonight. They told us it was out of gratitude for our guiding services but it was our pleasure to ride with such fine people and explore a run where it truly was 'the ride and not the destination'. They also further conspired to mark Sandy's upcoming birthday with a festive note. In any case, thank you Ron, Laurie, Brad and Judy for both dinner and an entertaining trip. Although we aren't quite done this one yet, we are already looking forward to our next adventure together. 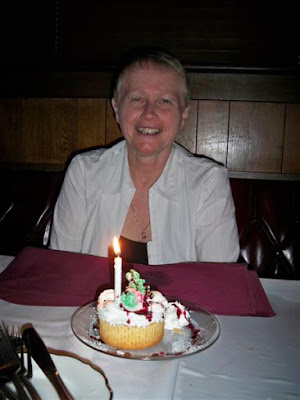 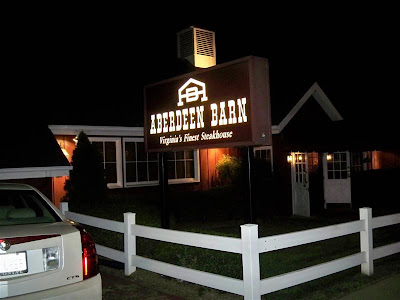 The Aberdeen Barn - Charlottesville, Virginia
On the way back to the hotel we noted that, while to south has withering heat and humidity on most summer days, the mornings and evenings are among the most pleasant to be found anywhere.

After supper, I worked on some blogging and bill recording before turning in. Tomorrow, we will visit Monticello and pay homage to Thomas Jefferson, a thinker and doer to whom the world owes so much for articulating the principles of individual liberty.