I got a call last night from our friend Mo at Kickstand Lodge down in North Carolina. Some friends of hers from Georgia were staying there but their 19 year old son Ryan was on a graduation motorcycle trip and had broken down in Sudbury. The bike had a broken throttle cable and the word was that the dealer wasn't being very helpful.

Ryan was at the Super 8, so I called him and got, as Paul Harvey says, 'the rest of the story'. He's riding a 65o Suzuki V-Strom. He broke down on Canada Day and CAA took his bike to Sudbury Boat & Canoe on Long Lake Road. Yesterday, SBC didn't have a cable in stock, was told they were back-ordered and couldn't find one after calling other dealers. All in all, the whole situation looked pretty bleak.

Not being an expert on cables, I phoned for help. Gord, as usual, was right there. We agreed to meet at Gonga's next to the Super 8 this morning at 8:30 to see Ryan and look at possibilities. Everyone was on time and we had breakfast while wondering if we could swap push and pull cables or use a similar cable, even if it was a different length.

Without feeling much optimism, we headed over to SBC where Laurence ( a former member of the Sudbury Trail Plan Board at the time I was on the executive) told us they had the situation under control. A new 650 V-Strom had arrived and they would pirate the throttle cable from it. Suzuki had promised Laurence that he would have a replacement cable by next Wednesday. So it all turned out for the best without any heroics on our part. 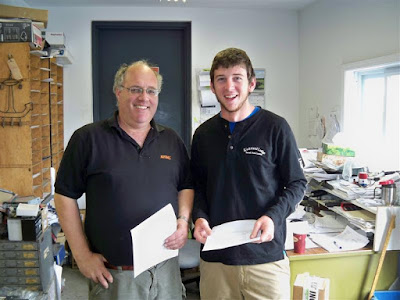 Laurence and Ryan settle the bill 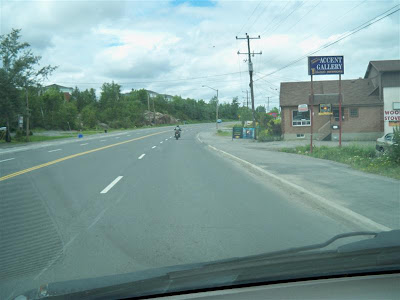 Ryan on the road again
Kudos to Sudbury Boat & Canoe and Suzuki Canada for going the extra mile to make sure this young man gets home with his bike.

Ryan tells me that after the rain in New England and the breakdown here, he's about ready to go home. He's leaving early tomorrow and riding to the Soo. From there, I-75 will take him to Valdosta, Georgia, right near where he lives.
Posted by Jim "Skid" Robinson on 7/03/2009