One more good looking morning dawned. I hadn't slept very well but we were up and packed early. We lingered longer than usual because we weren't happy about leaving our fellow travelers. The Quality Inn breakfast was better than most, with bacon and eggs in addition to the usual fare. We spoke with two men on Harley's from Montreal. One had lived in Sudbury when a child and the other had relatives there. There were also BMW sport bikes that had trailered in from Ontario, but we didn't see the riders. The last group were ATF K-9 handlers who, from their insignia, had bomb sniffing dogs. I hope they were there for a training exercise.

When the time came to head out, Sandy got a group shot of the gang. You can see from the sad faces that they are sorry to see us go:-)) 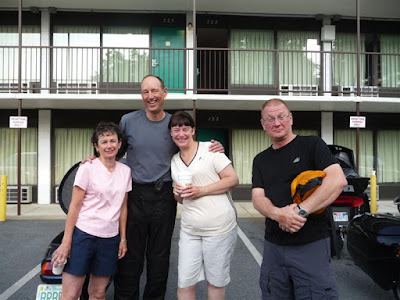 We crossed into West (By God) Virginia at 8:00, over the Potomac River into Maryland at 8:22 and were in Pennsylvania by 8:30. That is four states in just over 30 minutes. Just inside Pa, a beat up car was holding the left lane. I flicked the brights and a female hand came up through the sun roof to make a gesture. I passed on the right and figure this girl could play the lead in a video of the Dixie Chicks song White Trash Wedding. Oh well, it takes all kinds.

As we rode north, I was having some concerns about my ability to switch from wandering mode to the long haul situation I would face today. It wasn't 9:00 AM when I was finding myself quite fatigued and stopped at a rest area south of Carlisle for a quick comfort break and a shot of 5 Hour Energy. This picked me up and we ran past Harrisburg, stopping for fuel where 322 meets US 15 just before 10:00.

When we reached Lewisburg Pa just before 11:00, the clouds were getting more ominous. A man on a purple 800 Vulcan stopped beside me at a traffic light and asked my thoughts on the Wing versus a Harley. He then followed us all the way to Williamsport, where I stopped at the scenic lookout above town and had a chat with him in detail. He's a truck driver named Don and he and his wife both have 800 Vulcans but he wants to trade up. We talked options and I gave him the VROC address. He was considering a Road King so I also suggested I would be more amenable to a Nomad or Voyager. I gave him my Email address and told him to contact me if I could be of any more help. I hope he finds what works for him.

Above Williamsport, the winds got quite gusty. We ran up the four lane road and, near the New York border, the GPS again got lost as the new road wasn't in the 2008 database. I really do need to upgrade. 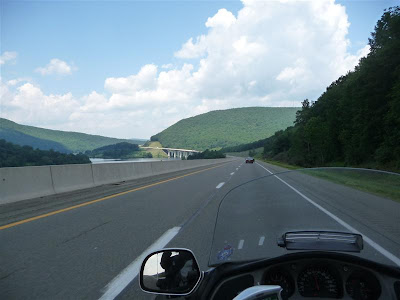 Northern Pennsylvania along US 15
We crossed into New York at 12:40 and stopped in Corning at McDonalds for lunch at 1:00. There were a great number of redheads in the Mickey D's, something Sandy commented on. I have a thing for redheads (of the female persuasion). We were on the road again at 1:20, following I-86 to I-390 and getting off at Geneseo where I stopped another bout of fatigue with another 5 Hour Energy drink and a Butler mug full of coffee. While I fueled. The lowest gas price I saw on our trip was $2.29 for regular while here, in Upstate New York, I paid 2.77.

We followed SR 63 to Batavia, where traffic was backed up due to road construction. It took a while to get to the Thruway but, when I did, the transponder (the van one I took to replace the bad bike unit) gave me a green signal. Westbound towards Buffalo, we could see the line of dark clouds just north of us. 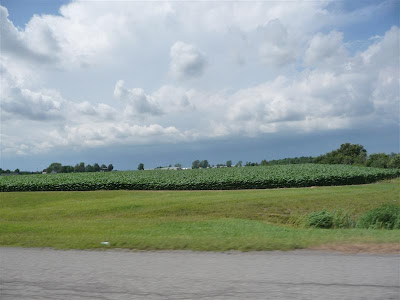 Cloud line north of the New York Thruway
Reaching Buffalo, I opted to take the southern route and cross on the Peace Bridge at Fort Erie instead of following the GPS advice and going to Lewiston. The Peace is usually a quicker crossing and a sign on I-190 bore this out, saying the Lewiston bridge was backed up. We crossed the bridge into Canada at 4:06 and everything went perfect. Sandy flashed the NEXUS cards at the reader and pulled into the booth with no one ahead of us. The young lady looked at her screen for a moment and then said "Thank you" and waved us on. The EZ-Pass opened the gate at the toll booth and we were on our way.

The line of black cloud was quite defined and we needed to get across it. We passed under it about Niagara Falls and, before coming out the other side, the windshield got hit by one huge raindrop. That was it. We continue to run with the horseshoes. 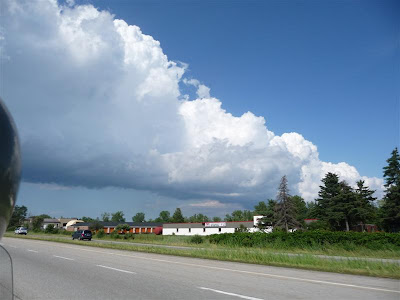 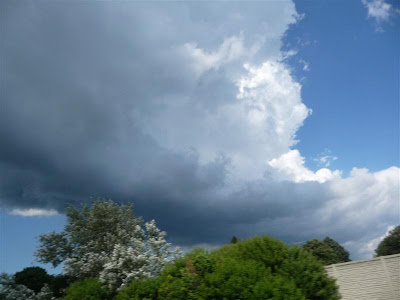 Cloud line around Niagara Falls
St. Catherines rush hour wasn't too bad, even with the road construction. We continued on, crossing the Burlington Skyway and connecting with ETR 407. There was a really rough patch as we approached the 401 but, after seeing the stopped rush our traffic westbound as we went over the 401, we were happy with what we had. This joy lasted until we left the 407 at 400 North and entered a parking lot. I hated doing it but I ran the right lane as far as I could and then slipped into traffic. Then I worked my way over to the fast lane. Balancing the engine temperatures with the clutch, we succeeded to getting north of Major Mackenzie Drive where the 400 settled on three lanes and the traffic started to flow. I stopped at the King Service Plaza for gas, coffee and one more 5 Hour drink. I think that was one more than I was supposed to have. We were going again at 6:00.

I have to wonder about people who commute to and from Toronto daily. This seems like an intolerable task. Luckily, most of them hog the centre lane so I was able to make good time in the right hand (slow) side. North of Barrie and the Highway 11 split, traffic got light and clouds got dark. It spit a bit by 93 but that was it.

We stopped again at the Esso in Waubaushene because the temperature was dropping so we put the outer panels back in the jackets and changed gloves. After days in mesh and light gear, the jackets felt really heavy. I also fueled on a precautionary basis just in case the fuel mileage went down. Now we could make Sudbury without worrying. I was feeling jittery, the effect of all the caffeine I had been downing all day. The sky now looked much better without sunglasses on.

We rolled through Parry Sound and on up Highway 69. About an hour from town, just as the sun was going down, Ron called to say the were south of Williamsport. They had spent time visiting Gettysburg in very hot, sticky weather and this was as far as they had gotten. The weather wasn't looking optimistic for them tomorrow.

As it darkened, the temperatures dropped to around 16C. North of Grundy, I noticed tall vegetation right at the side of the road. Great hiding places for the very wildlife I would like to be able to see to stay alive. I guess that the Province must not be able to afford the mowing they used to do. At dusk, the headlights don't yet have any power but the ambient light isn't good either. This is a time I avoid riding if I can but we were committed.

Everything worked out for the best and we pulled into our driveway at 9:58 PM, just over 14 hours after leaving Front Royal. I was surprised how, after my tired morning, I had switched to the long haul groove and the miles had slid by. We did a quick unload, caught a little TV to unwind, and then hit the hay.