We didn't rush this morning. The Honda shop website said the sales department opened at 9:00 but I figured maybe the service department would open at 8:00. that still meant we didn't have to leave until 7:45 so we took our time over breakfast and packing.

The first challenge was to find the bike key, which had gone missing overnight. I had the backup key, which I used to unlock and search the bike. I had my clean jeans on for supper, which Sandy had repacked in my clothes bag, so we looked there but it wasn't in the pocket. Sandy looked through the bag and didn't see it. After looking everywhere else, I finally emptied the contents of the clothes bag in the parking lot and there it was. 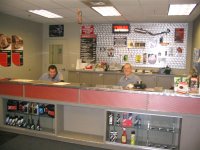 We headed over to the Honda dealer and got there just after 8:00. Sure enough, the service department was open. Upon entering, I was met by these smiling faces. They had a Metzeler tire in stock and got right on it. We repaired to the waiting area, which was set up like a small cafe with coffee. I spent the time getting some Visa receipts sorted and entered. Although they said it would be ready at 10:00, someone came by at 9:24 to tell me it was done. Rear tire and final drive oil were replaced and there was 50% left on the rear brake pads. At $169, the tire was a good deal too.

I can recommend Big Valley Honda in Reno to anyone. Their facility is top notch, everyone is friendly and helpful and they really make you feel at home. They also rent bikes; Wings, ST1300's and VTX's. They even had the grommets I've been looking for the replace the one I damaged removing the panel to check the oil. 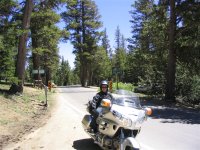 The rental manager suggested we might like to try Ebbetts pass on our way west over the Sierras. He said it was 'interesting'. Since we would be coming back up on Highway 88 next week, we decided to give it a try. We followed 395 south to Gardinerville and took 88 to 89 and onto 4, the road through Ebbetts. We were a ways up this road, winding along the edge of a small river, before I realized this was the road to Angel's Camp. This was the road Slots said he would never ride again. Oops.

As we started to climb, the road narrowed and the centre line disappeared. The road wound up and around blind corners with sheer drop-offs on one side. I was so focused on watching for oncoming traffic in blind corners that the height didn't even bother me. Climbing at low speed pushed the temperature gauge almost to the red. Finally, we reached the summit of Ebbetts Pass at over 8,700 feet. The we started down and entered a valley where the riding was more relaxed. We came to a wide stretch with a centre line and I breathed a sigh of relief. It was short-lived. The road narrowed again and we started back up to a second summit.

I was very pleased with myself. Two years ago, I wouldn't have been able to ride this road. Today, it was a challenge but I never had a moment of doubt and pretty much enjoyed the experience. 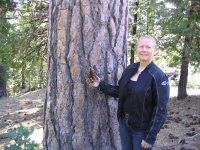 The second time we started down, we came to a real highway. This was a first quality road that swept back and forth down the west side of the range, a very enjoyable ride. We stopped at one place to look at some trees and Sandy found this pine cone. As we continued winding down, we entered Calaveras County and I started thinking of Mark Twain and jumping frogs. Then the significance of Angel's Camp became clear.

In Angel's Camp we moved from mountains to foothills. We also moved from forest to yellow grass dotted with dark green trees. The road continued to wind but there were no blind corners. The temperature started to rise into the high 90's and, as we hit the flat lands, exceeded 100. But it was a DRY heat. Right. The last stretch into Stockton was through flat agricultural lands. Orchards and fields with a stretch where migrant workers were picking and bagging onions. Stockton Red Onions, as Don told me later. It looked like a brutal job.

In Stockton, I made a wrong turn and ended up in a not so affluent part of town. A quick map check gave me the correct directions and we found Don's place with no further problem. We put the bike in Don's garage. He had moved two of his five bikes to a neighbor's garage to make room. We enjoyed some cold, clear water and kicked back for a bit.

For supper, we picked up Don's mom and dad, Leona and Frank, and went to Dave Wong's Chinese restaurant. Frank is going to be 93 tomorrow and doesn't speak since he had a stroke 13 years ago, but he smiles a lot and really likes to eat. Leona is a hoot. She is outspoken and very funny. Don ordered a series of dishes, some of which were not even on the menu like peanut pressed duck and chinese broccoli. He also showed us the proper way to use chopsticks. The food was excellent and Don wouldn't let me get part of the check. Thank you very much, Mr. Inamasu.

After supper, we took Frank and Leona home and then took a drive around the marina and the golf course community. Don is an avid golfer and the whole facility looks first rate. Then we came home for a bit until someone suggested ice cream. This involved a drive across town, back to the other side of the tracks, to a little ice cream place on a corner. Then we got the guided tour of Don's childhood neighborhood and other parts of the old city. I recognized the old Stockton train station from an article in Model Railroader magazine.

Back at the house, the temperature finally cooled down and beacme very comfortable. Don and I sat out back talking about life, the Universe and everything while Sandy went to bed.
Posted by Jim "Skid" Robinson on 7/14/2006