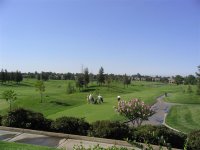 The first decision of the day was clothing. Don was going to show us the Brookside Golf Club where he spends his non-riding days. The only snag was that the men's dress code specified no jeans and a shirt with a collar. Perfect, except that all I have is jeans and T-shirts. Don dragged out an old golf shirt and a new pair of pants he hasn't had shortened yet. They fit me just fine, so off we went to the course.

Brookside is a beautiful course surrounded by a gated golf community. The clubhouse is a fine building and it all is much nicer than anything Sudbury has to offer. It looks like it would be a fine place to make a second home.

Leaving the golf course, we headed north on I-5 and got off at the Lodi Flying J. As we went by, I saw the HD TV truck from Wendover and Nebraska. We went north past Thornton and then headed west to the Sacramento River. Now I've always pictured Louisiana when I though of deltas and levees but the Stockton area has a similar thing. The delta of the San Joaquin and Sacarmento Rivers is similar. The marshland was reclaimed through the construction of many miles of levees and the islands created are used for farming. Most of the roads run across the tops of the levees. 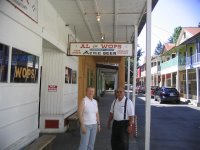 First stop was Locke. This was constructed about 1915 by the chinese labourers after the Chinatown section of Walnut Grove was destroyed by fire and is the only town in America constructed solely by Chinese. It became run down but recently people have started buying and refurbishing the buildings. There are now art galleries and some stores. In the middle of it all stands Als' Place, better known as Al The Wop's. The building was built in 1915 and bought by Al in 1934. Al passed away in 1961 but the bar and restauarant are still going strong. We stopped in for a coke. Just like at Snick's in Boscobel Wisconsin, the ceiling is littered with one dollar bills. 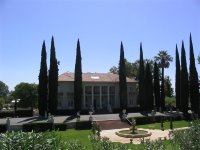 From Locke, we moved down the levee to Walnut Grove, where we got down off the levee and drove around the streets. It is a bit spooky knowing the water in the river is higher than the streets you are driving on. Then we got back on the levee road and, out in the middle of nowhere, came to the Grand Island Mansion. There was a wedding going on on the property, so we just stopped for a quick picture.

On the way back to Isleton for lunch, we encountered two places where there were no bridges across the river. CalTrans operates ferrys across the river since these are state highways. On has a boat pushing it, but the other is a cable ferry, pulling the barge along a submerged cable across the river. 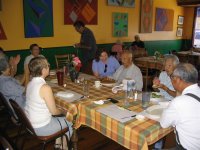 We arrived at the River's Edge Cafe in Isleton just after the family and friends had gotten there. It was Don's father Frank's 93rd birthday and the mood was festive. The staff know the Inamasu's and it almost felt like home. I had a BLT with a honey glazed bacon on foccacia bread that was excellent. Sandy had the shrimp Louie salad special.

Frank, sitting across from Sandy (Leona is to the right between him and Don) enjoyed a polenta lasagna and is admiring a giant birthday cookie the restaurant made for him. 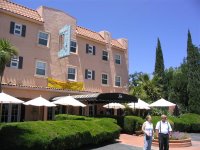 After lunch, we headed back to Ryde for a look at the Ryde Hotel. The hotel was built in 1927 at the peak of the prohibition era and featured a beauty salon, barber shop, speakeasy and (rumoured) a bordello. It has recently been restored back to its former glory and features 32 rooms of various sizes and a reknowned champagne Sunday brunch. The room rates through the week are fairly reasonable. There is a small 'executive' golf course out back. Unlike other places, the Ryde is built on top of the levee instead of down at or below water level.

After Ryde, we followed the levees to the edge of the delta, closer to Mount Diablo and near a very active wind farm. We went past Antioch and Brentwood and stopped at a small farm market to get some Brentwood white corn on the cob for Don's sister Laura.

On the way back to Stockton on SR 4, we took a detour to look at the Jones Tract, one of the islands created by the levee system. This island suffered a levee breach in 2003 and became a huge lake. At Trapper Slough, we took the road that the map showed going around the island. A large sign indicated this was not a through road, but we (the intrepid adventurers) went ahead and tried anyway. The sign lied. While there was a section of unmaintained road on the north side, we did get all the way around. We stopped and had a look at the site of the break and pondered the volume of water that had to be pumped out. The job was completed in 2004 and the fields are back in full production today.

In Stockton, we detoured through the Port of Stockton, a deep water port that sees ships come in via the Sacramento and San Joaquin Rivers with the assistance of river pilots and tugs. Some companies maintain major distribution centres here to avoid the coast traffic. Don was going to show us a downtrodden area and took us through a place called Boggs Tract. To his surpise, the building are being refurbished and, while not upscale, it looks like a decent neighborhood. 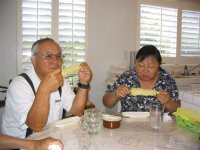 We arrived at the home of Don's parents and sister to find that Laura had hit a truck tire carcass on the way back from Isleton and that 'something' was hanging down under the car. It turns out it was the plastic skid plate protecting the underside of the engine. I wedged it back in place and she will take it to the dealer to be checked out. Looks like she was lucky. Leona cooked some of the Brentwood white corn and we each had a cob. It is a sweet corn, very tasty. Here Don and Laura are enjoying some corn. 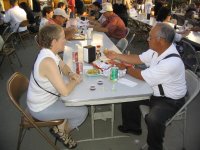 From Stockton, we headed north again to Lodi for the Lodi Buddhist Church Bazaar. They has a block closed off and many people were wandering, enjoying the food and games. Don ordered some Japanese dishes and we sat down and enjoyed them, washed down with A&W rootbeer which (Don tells me) originated in Lodi. Here he is explaining the nuances of tempura, sushi and teryaki to Sandy. They also offered steak sandwiches and hamburgers across the way for those with a more American taste, but most of the people were eating the Japanese food. The atmosphere was festive. 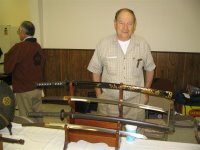 One treat in the community centre was a display by the Sacramento Japanese Sword Club. I had an extended conversation with this gentleman who owned many swords. He described the process of making the legendary blades, which he has seen done in Japan, and told me that now new blades from top level craftsmen are bringing the same price as the antique blades due to demand. The waiting list for a new blade is measured in years. The oldest blade on display here was from the 1600's and looked like new. The oldest in his collection was from the 1300's.

On the way out of Lodi, we drove through downtown. With all the concerns about downtowns falling into disrepair, Lodi is a pleasant surprise as people congregated and wandered the sidewalks. It was almost a magical place.

It was about 101 today and tomorrow should be hotter so we are going to San Francisco to cool off.
Posted by Jim "Skid" Robinson on 7/15/2006