Again the day started warm with a forecast of very hot in Stockton. Don assured us it would be much cooler on the coast this time.

It was a familiar ride north and west across the delta to Rio Vista. Beyond there, we passed another substantial windmill farm. I continue to be amazed by the amount of wind generation California has. 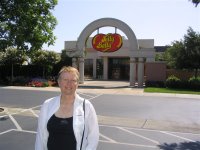 In Fairfield, we stopped at the Jelly Belly factory. I've been familiar with these very tasty and quite expensive little jelly bean candies for years but I had no idea that the factory was also a major tourist attraction. The large parking lot even had a separate section for RV's. The plant was named "Best Factory Tour in America" but the line-up for the tour was longer than we wanted to wait. Instead, we wandered the store and ended up buying a two pound bag of "Belly Flops", beans that didn't make the quality control cut. They are a bargain and taste just as good. The problem with a two pound bag is that you eat them too quickly. The factory is also a popular meeting place for the Northern California VROC rides.

We went north and caught Wooden Valley Road to SR 121 and then SR 128 in a loop that brought us out on the Silverado Trail in the Napa Valley. These roads would be every bit as good on a motorcycle as the better known routes in North Carolina and South Georgia. At the corner of 121 and 128 there is a store known as The Corners, a popular bike hangout. The sign said "Closed Monday For Cleaning". It was Tuesday and the place was still closed but we talked a bit with two pilots, one from Vacaville and the other from near Concord New Hampshire, who were taking a break from riding their sportbikes in the area. North of there, we stopped at the open store at Turtle Rock for water.

The drive through the Napa Valley past wineries known for their reds was pleasant. We cut across Petrified Forest Road, Porter Creek Road and Mark West Springs Road where we caught River Road to Guerneville along the Russian River. Continuing on, we went south through Monte Rio, home of the exclusive Bohemian Grove where the powerful gather, and down the very tight Bohemian Highway to Occidental through beautiful stands of redwoods. 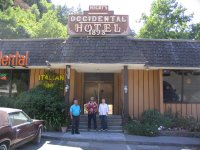 In Occidental, we were met by Howard 'NiteLite' Sublow, a VROCer from Petaluma who was born in Montreal. We'll see Howard on Friday at Topaz, but he drove up in his Jeep to have lunch with us at the Negri Occidental Hotel dining room. The Occidental has been owned and operated by the Negri family since 1893. They tell me that the family also owns most of the rest of Occidental. I was surprised by both how good the food and service was and how reasonable the prices were. Sandy and I had chicken parmesan and Don had duck which, as usual, wasn't on the lunch menu.

After lunch, we drove the Coleman Valley Road over to the coast. Since they said we both needed to see the view from the front seat, Sandy went with Howard in his jeep. He led since he knew the road better. We immediately left the valley by hanging a right out of the Occidental parking lot and starting what seemed like straight up. The road wound through redwoods, periodically coming out in the open. At the top, it opened up and we had a great panoramic vista of the rolling hills along the coast. The Pacific came into view and then we were starting down to the coast. And I mean DOWN. 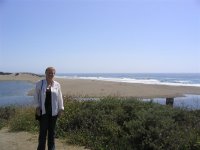 At the bottom, we turned south on Highway 1 past beaches loaded with surfers, swimmers and sunbathers. We stopped at the parking lot above Salmon Beach where I got a picture of Sandy. I told Don and Howard that my father's home on the North Shore of New Brunswick was also Salmon Beach so I felt right at home. Howard left us to head back to Petaluma and we continued south on Highway 1 through the town of Bodega Bay, the setting for the Alfred Hitchcock masterpiece, The Birds. We then followed the road inland to Bodega. 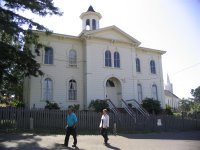 In Bodega, we took a side road to an old school. This building was used in The Birds but, with the use of cinematic magic, they made it appear to be in Bodega Bay. There was a younger couple from Minnesota there and the man was trying to get just the right angle for a picture. Although the location wasn't marked, another car of Hitchcock fans pulled up before we left.

The next stop was in Freestone for some bread. The bakery was closed but the Freestone Store, established in 1876, had some. They also had an interesting selection of wines in a rack at the back.

From Freestone, we went through Sebastopol taking back streets to dodge what was now rush hour traffic. We continued on the Santa Rosa and negotiated back streets to the Charles M. Schultz Museum. Almost everyone knows that Charles Schultz was the creator of the beloved Peanuts comic strip. We were too late for the museum but the gift shop was open and had some interesting things. Strangely, the parking lot for the museum and adjacent skating rink was extremely full. 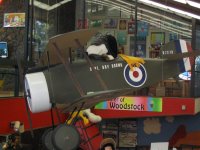 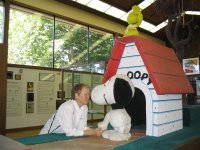 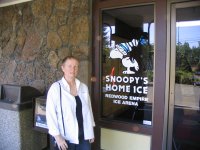 In the store, Snoopy is seen gunning for the Red Baron. The name Capt. Roy Brown is painted under the cockpit. Brown was the Canadian who was officially credited with shooting down the Red Baron, although this has since been disputed. Sandy had a chance to rub noses with the world's most famous dog and we found that the arena was hosting the World's Seniors Hockey Tournament which explained all the cars. I saw some Canadian teams on the schedule but none from Ontario.

We fought our way through Santa Rosa traffic and left town on SR 12 into the Valley of the Moon. This had more vineyards and wineries on the way down to Sonoma. We passed the gate of the Smothers Brothers tasting rooms. Don said this valley has more white wines compared to reds from the Napa.

Sonoma was a treat. We got there about 6:00 and found a large number of people gathered in the town plaza. There was a farmer's market and music and dancing. Families were picnicing or just sitting and watching. The shops laid out around the plaza and the lanes were immaculate and there were many people of all ages wandering around. It felt much like the downtown in Lodi, very much used and appreciated. We found a shop in an alley that had Hawaiian ice cream and gelato and ate some sitting at a table outside. 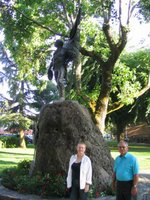 In the plaza, there was a statue commemorating the Bear Flag Republic. It was on this site in June 1846, on the verge of hostilities between Mexico and the USA, that 33 men hoisted the Bear Flag and made a declaration of independence from Mexico. The new republic lasted for 25 days and then, when hostilities broke out, the Bear Flag was replaced by the Stars and Stripes. An updated version of the Bear Flag is now the state flag of California.
The drive home from Sonoma was uneventful. We did get to see a C5 transport flying what looked like touch and goes as we went by Travis AFB.
Once again, the day was warmer on the coast than predicted. NiteLite agreed with Don that this was unusual, but I am beginning to have serious questions about this.
I turned in early after one more day filled with exploration of California. Tomorrow will be a down day for laundry, blogging and catching up before heading to Topaz on Thursday.
Posted by Jim "Skid" Robinson on 7/18/2006