Our hotel offered a full breakfast buffet, so we wandered over to the lobby and had some eggs, bacon and a pancake. A lady came in who said she had seen us in a rest area the day before. We invited her to join us and found she was originally from Cleveland but now resided in Boulder, Colorado.

The temperature was in the low 60's so we started out with the mesh jackets. We headed west with a slight tailwind and virtually no traffic. As we passed Big Springs I pointed out the truck stop where I and a few others helped a lady tie a car top carrier to her rustbucket last year. I mentioned that we had lunch at the Subway there, sharing a meal deal. Sandy immediately recalled that this was the time I finished all the root beer myself. She does have a good memory where my screw-ups are concerned.

When we got to the place where I-76 branches away from I-80, we stayed on I-80 for the first time. We have always taken I-76 to Denver in the past, so everything after this point was vuja de (the sensation that you have never done this before as named by my brother Rabbi). As with 76, though, the highway starts to climb from this point. 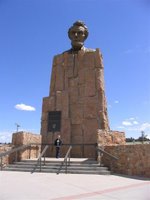 The temperature stayed mild as we approached Cheyenne. Although much fuss is made about Denver being the 'mile high city', Cheyenne has it beat with an elevation of slightly over 6,000 feet. We continued on and kept climbing. Some strange rock formations appeared to the north, almost like the SD Needles.

I noticed on one stretch, as I was passing a truck, that the bike seemed a bit down on power. At the top of one hill, a tourist information rest area beckoned and I found the reason for the power loss. We were at the Summit Rest Area, the highest point on I-80 at 8,640 feet. They have a large memorial to Honest Abe Lincoln since this is called the Lincoln Highway. Here Sandy stands in from of it. The next picture looks back 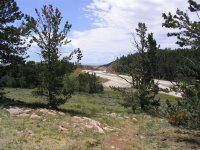 at the trucks hauling through the red rock cut at the summit. The town of Laramie is just down the road.

After Laramie, the serious winds started. There was a sign warning of possible dangerous winds for the next five miles. At the end of the five miles, there was another sign and another five miles. And so it continued. The winds were mostly from the southwest, so the were quartering from my front left. Until a truck passed me, and then they came from everywhere at once.

I wondered where the windmills were, Then we saw them. Maybe more than West Texas. As many as Lundbreck Alberta. Rows and rows, turning the hated wind into clean electricity. One person's minus is another person's plus. The tempreature was now fluctuating between 27 and 32 C. Not nearly as bad as it could have been.

We stopped at one rest area and met a guy from Colorado on a GS-1200 Beemer loaded for bear and on his way to Alaska. We talked about the wind. He said one arm was now longer than the other due to fighting it. After we pulled out, we encountered the first of several local showers. They were all light and the roads were dry five minutes after they were done.

We stopped for gas in Green River, taking the scenic route through town. For some reason, this place has put the rain grooves in its road crosswise, making for a very unnerving vibration from the tires. When I stopped at the Exxon station, I put the bike on its centre stand and checked, but they were fine. As I was doing this, a Nomad pulled into the next pump. It was a fellow from Davenport Iowa (who didn't know Auggie) who we had met in a rest area in Grand Island Nebraska yesterday. Small world continues.

At the next rest area, we met a rider loaded for bear on a BMW GS-1150. He was heading for (you guessed it) Alaska. He said he'd been through here before and didn't remember this much wind. Lots of Alaska riders. Oh yes, the Nomad rider was Alaska bound as well.

It was at this rest area that we decided to stop short of Salt Lake City. We quit at Evanston Wyoming, three miles short of the Utah border. This place has beaucoup motels. We are at the Comfort Inn. As I was unloading the bike, a man and two women who had just arrived came over. Bob and Carol are from Kincardine Ontario and the other lady is from Toronto. They are heading west to visit their kids who are in San Francisco and Livermore California. We all had supper together and then returned to the hotel where Sandy and I jumped in the pool and hot tub for a while. Then Sandy hit the hay while I am still up blogging.

The tire saga continues. There was, again, no discernable loss of tread and the gauge reads the same as it did before we left home.

Today was only a 600 mile day, but we worked at it. Tomorrow, we are aiming for Reno Nevada, another 600 miles. Hopefully, we can have a visit with Paul 'Slots' Manske in his home environment. Friday we will wander over to Stockton California to Don VSP Inamasu's place.
Posted by Jim "Skid" Robinson on 7/12/2006