Sandy and I decided to try the ham steak this morning for breakfast. One order shared between both of us should be good, we thought. The ham came on its own plate and both of us weren't able to finish it along with the toast, eggs and potatoes. It was, however, a very good value.

Today I had a very modest goal. Other rides were heading for Tioga Pass in Yosemite Park, Lake Tahoe or Mono Lake to the south. All I wanted to do was confront Monitor Pass again and get the worries I had been harbouring since my very stiff descent on Thursday out of my system. It turns out I would have company as good old NiteLite (with his daughter Laura Anne on back) volunteered to lead and his son Brian, Cranky, Sherm and Lisa and Gary "Cash Kaw" Jones decided to go along for the ride.

We headed south on 395 a few miles and made the turn on 89 towards the pass with Howard in the lead, Gary second, us third and the rest of the crew arrayed behind us. The first little stretch was through a small canyon and across the valley floor to the start of the climb. My pulse quickened as we rode but I thought positive thoughts. What I discovered as we approached the grade was that it looked a whole lot different from the bottom. Instead of sheer drops, the ground sloped away from the road although this wasn't apparent when going down. Instead of being faced with a 2,500 free fall, it would only be a 2,500 foot tumble. For some strange reason, I had no problem with that:-)

Howard set a relaxed pace as we started the climb out of the valley. This time, I was relaxed even though most of the time we were on the outside next to the edge. I found myself wishing we could pick up the pace. Before long we were at the top. In the last turn to the left onto the plateau there is no road visible ahead of you or to the right and, as Slots says, it is like you are flying for a moment. Then we were in the high meadow and I had faced down another self inflicted demon.

As we rode across the high desert, Sandy pointed out a coyote. It took me a couple of looks to pick him out as he slinked away from us in the sagebrush while looking back over his shoulder reproachfully. He didn't seem thrilled that we were invading his space. We continued on and started to wind our way down, passing the Highway 4 turnoff to Ebbetts, and continuing along the river to Markleeville. 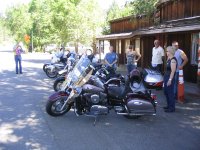 Markleeville is about two small blocks long, but it is the county seat. There is one restaurant that used to be biker friendly but was then taken over by Yuppies who tried to cater to a different clientele. They have changed their tune, but we avoided the place on principle. The Deli across the street looked closed, but someone was at the door and said they would be opening in five minutes. Excellent timing. Some of us had ice cream, some had other things and we sat on the shaded deck and talked a bit.

The Sublows elected to return to Topaz over Monitor while the rest of us decided to go on. Brian later told me that he had a better understanding of my attack going down the grade since it looked entirely different from that direction.

The crew going on decided we would go to Genoa. Since I had been in Markleeville three times in the last ten days, I was nominated to be leader. I set a leisurely pace on Highway 89 and hung a right on 88 towards Gardnerville. Without aid of a map, I made an instinctive left onto Foothill Road and we wound our way along the base of the Sierras, always taking the road nearest the mountains. There were several bicycles, including a couple of young ladies who were riding two abreast and taking up our entire lane through a semi-blind curve. A pox on them. I also almost rear-ended a truck towing a trailer when he slowed suddenly to turn while I was looking ahead for a passing spot. A wake-up call, since it would have been entirely my fault. 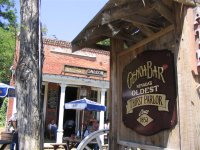 GenOa. That's how they say it. It's home to the Genoa Bar, "Nevada's Oldest Thirst Parlour". This place has been in business since 1853 and currently boasts a strong motorcycle following. There were a lot of bikes out front. To our surprise, there was also some sort of cruise-in happening and both sides of the street were lined with a variety of classic and vintage automobiles. We walked up and down admiring them until the sun, which was now overhead and quite oppressive, made us seek the shade. 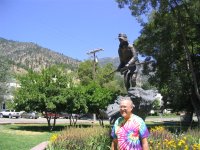 On one corner down the street from the bar, there was a pretty little park. There was a statue there dedicated to John 'Snowshoe' Thompson. Despite the name, Thompson brought his knowledge of skis from Telemark Norway and, using a pair ten feet long, carried the mail over the Sierras from Placerville California for twenty winters in the mid-1800's. The picture of Sherm in front of Thompson's statue is appropriate because I believe they share the same indomitable spirit.

After the visit to the park, we stopped at a small restaurant across from the bar where some of us had sandwiches. Gary opted to leave us at this point and head back to the Lodge while we continued on up Jack's Valley Road. As we left Genoa, two mule deer came bounding out of a yard and around a hedge. One crossed in front of me and the other stopped, as did I. Sherm noted that this was right at a deer crossing sign. Since the second deer didn't seem to want to commit, we eased forward until we were past them. Once again, my deer encounters happen about noon. Jack's Valley Road met 395 just south of Carson City and it was then a straight shot back to Topaz with a gas stop in Gardnerville. Funny but it was the same three bikes as yesterday.

Back at the Lodge, Sherm installed a set of foam tunnel fillers he took off Kokopelli on Quicksilver. These block rain and dirt from coming up inside the fairing through the opening around the fork legs. They have over 80K miles on them but they work just fine and it pleases me to know that a part of that noble motorcycle rides on with me. Thanks, Sherm. 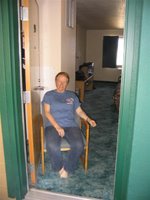 At the Lodge, we spent some time talking with Mark 'Grumpa' McGillis and his lovely wife, Debbie who were in the room next to us. Sandy and Deb had already spent time talking about our Joe Rocket Alter-Ego jackets and Sandy's Gerbing heated jacket liner. It seems both of them are the same size so Deb now knows what sizes she wants. The sun continued to be hot and I got a picture of Sandy making use of the A/C in the room while still conversing with the folks outside. We then went over for supper with the Grumpas and Chuck 'Mac Guy' Noll.

After supper, it was time to head over to the pitch for the HSVROC Raffle. While many donated prizes to this, the prime movers were the Sublows, with Howard chasing many businesses to ante up. The net proceeds from the ticket sales, after the 50/50 prize, were to be donated to fight breast cancer. 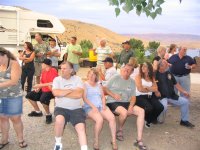 The assembled crowd eagerly awaited the drawing. The prizes, large and small, were selected one at a time and then a name was picked from the barrel by Bikerdad's young daughter. We went along for a while and then won a prize. And then another. And another. When the final tally was in, we won three shirts, a pair of leather gloves, a hat and a leather tool pouch. We gave a couple of things away, but the shirts and gloves got packed. The 50/50 draw, worth over $500, went to GypsyCat, a very interesting lady from the Pacific NorthWest. An excellent showing, many thanks to the Sublow Clan for all the hard work.

After the raffle, some of us wandered over to the Casino for a while and then sat outside and watched heat lightning flash over the hills across the lake. Then it was time to turn in since it would be an early morning tomorrow.
Posted by Jim "Skid" Robinson on 7/22/2006