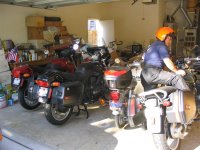 The day dawned hot and clear in Stockton, as usual. We packed and loaded the bike while Don moved the motorcycles of his fleet around in the garage. He is riding his 500 Vulcan (not pictured) to Topaz. We set out north on I-5 and stopped for gas and breakfast at the Lodi exit. After taking back roads around Lodi, we connected with SR 88 and started into a few curves in the foothills. 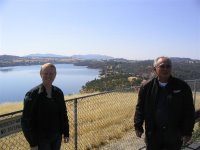 Don took us on a side trip up to the viewpoint above the Pardee Dam and Reservoir. It was 95 degrees in Jackson as we started to climb amidst moderate but not very fast traffic. In one little town, we got behind some moving trucks moving a few miles up the road at around 20 MPH, which caused a major traffic jam behind us. 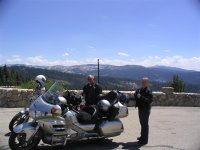 We stopped at the Peddler Hill Overlook for a break and a beautiful view of the Sierras. When we got going again, all the other traffic was gone and our run up through Carson Pass (8,573 feet), named for scout Kit Carson, was undisturbed. The road was composed of big sweeping turns and was fun to ride.

Instead of following 88 into Gardnerville, Don turned right on SR 89. This was the way we accessed Ebbett’s Pass last week, but this time he stayed on 89 after Marleeville instead of taking SR 4 to Stockton. The road took us on another winding route through Monitor Pass (8,314 feet). All was well until the last few miles when the road descended about 2,500 feet in three miles. I made the mistake of looking down into the valley at the top of the hill. There appeared to be nothing beyond the edge of the road but a sheer drop with no guardrail. This caused me to tense up and have the first uncontrollable panic attack in over a year. I made it to the bottom but the descent was not any fun.

At the bottom, SR 89 connected to US 395 where we took a left. After a couple of miles, Topaz Lake and Topaz Lodge came into view. At the Lodge, I thanked Don for going down the grade slowly out of consideration for me. He said he always came down that hill at the speed. We checked in and took our gear up to our room.

You may recall back in May that I told about our friend Sherm and the wreck he had in Oregon. Well, you can’t keep a good man down. Sherm was here with his new 900 Vulcan. He towed it down from Coos Bay behind his little Toyota pickup truck, but he was here and looked remarkably well for someone who was in ICU less than two months ago. 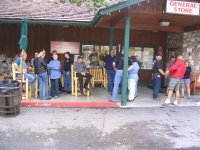 We went to supper at the Lakeside Room in the Lodge with Jim Siegelaar of Alberta and Slots. The windows afforded us a great view of the lake and the torrential downpour that struck right after we were seated. It was nice that it didn’t happen while we were riding the passes, but others weren’t as lucky. After supper, the crew gathered in front of the convenience store trying to stay dry while we visited. Then, after it stopped, we moved over to the picnic tables near the horseshoe pitch and continued the conviviality until we went to bed.

I’ll leave you with a shot of the sun hitting the top of the mountains across the lake as it went down behind us. 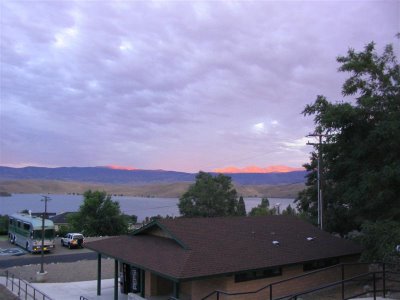